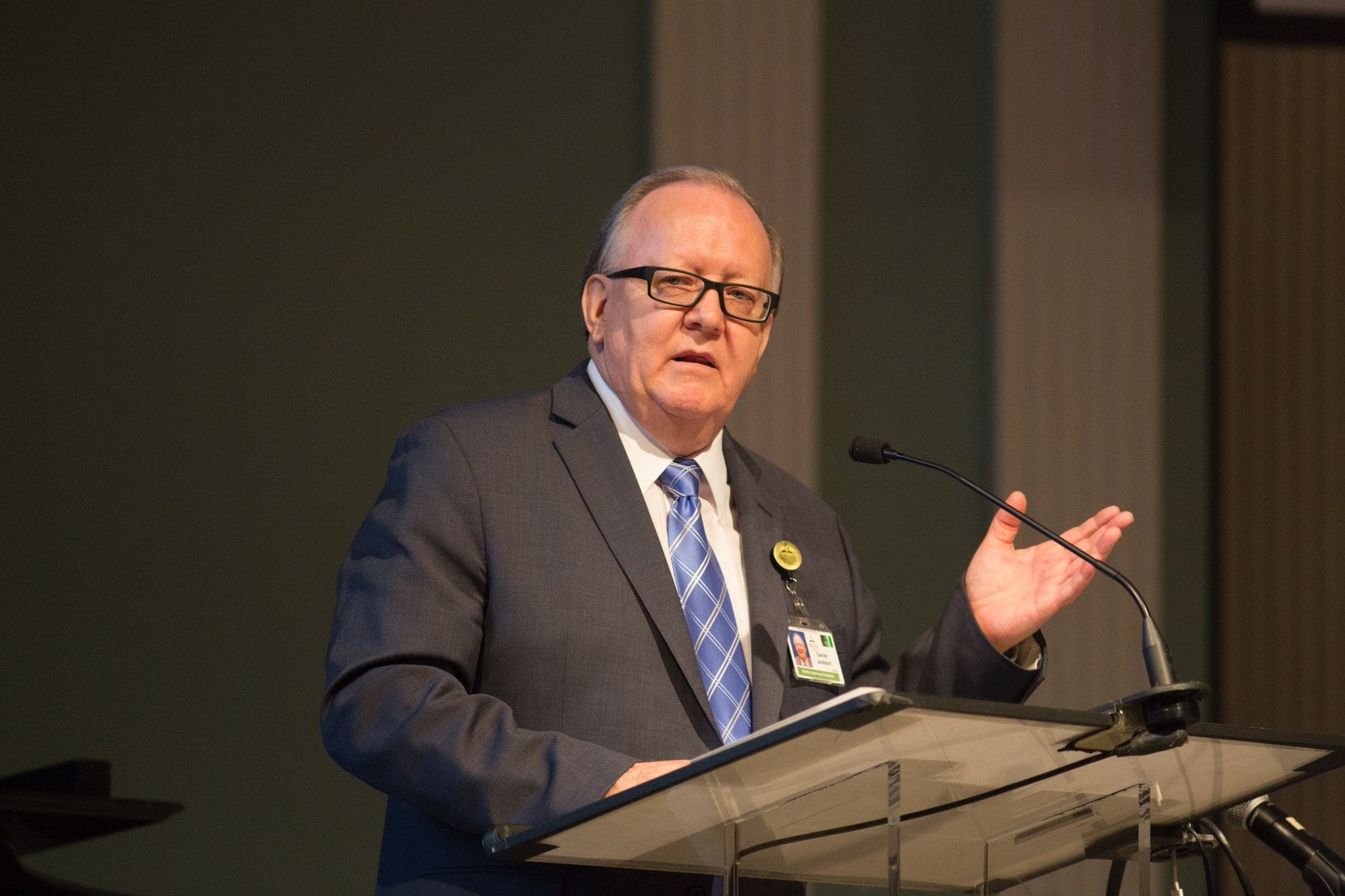 Daniel R. Jackson, president of the Seventh-day Adventist Church in North America, announced that more than 200 new congregations have been established this year and called on every North American Adventist to participate in the church’s mission of spreading the hope of Jesus’ soon coming.

Jackson, giving his annual president’s report Thursday at the opening of the North American Division’s six-day year-end meetings, said a person’s worthiness to serve God was not determined by education, talents, or ordination.

“I don’t care if you are not ordained, if you have accepted Jesus as your personal Savior, you are a minister of the most-high God.”

“I don’t care if you are not ordained,” Jackson told a packed auditorium at North American Division headquarters in Silver Spring, Maryland. “If you have accepted Jesus as your personal Savior, you are a minister of the most-high God.”

But the bottom line, he said, is that every member must be involved.

“No matter who you are, God has a call and a claim on your life,” he said.

Jackson said people across the division wanted to know how to be more effective in mission and it was the job of division leaders attending the meetings to find creative ways to facilitate mission.

He said North American Adventists should keep four words in mind when it comes to mission: reach, Christ-centered message, hope, and wholeness.

Speaking of reach, he urged every church member to not only pray for revival in their own churches but to also actively engage in their communities.

“There is no safety for God's church within the walls of a building,” he said.

In engaging, church members need to share a Christ-centered message to those around them, he said.

“If you don't preach Jesus, you are wasting your time and everybody else's,”

“If you don't preach Jesus, you are wasting your time and everybody else's,” he said.

Those four elements of mission can only be shared through the intentional efforts of church members, he said.

“I don’t care about your education or talents,” he said. “All can be used by God.”

Later, he added: “All are needed. All are wanted.”

Jackson reiterated the desire of North American Division leaders to employ more women in gospel ministry across their territory and said it was up to each member to decide his or her own views on women’s ordination. But he said the North American Division’s actions adhered to the policies of the General Conference, the administrative body of the Adventist world church.

“If you have heard that we are in a state of rebellion, it's just not true. It's just not true,” he said, adding moments later, “Our emphasis on more women pastors is within General Conference Working Policy.”

Jackson was referring specifically to the employment of commissioned and noncommissioned woman pastors, Daniel Weber, communication director for the North American Division, said in an interview. Weber said the division currently has about 160 women among its 5,000 pastors.About half of those 5,000 pastors will retire over the next 10 years, he said.

More pastors will be needed as pastors retire and the division seeks to open 1,000 new churches over the next five years, a goal that the division announced last year. The division is on track to meet that goal of 1,000 church plants with Jackson’s announcement Thursday that more than 200 new congregations have been established since January 2016. Weber said the precise number is 203.

The division sees new church plants as vital to membership growth. It tweeted on its @NADChurchPlant account on Wednesday that new churches grow three to five times faster than established churches and reach far more people who are not members of any denomination.

Overall, the Adventist Church in North America has 1,231,006 members worshipping in 5,493 churches and 853 companies

Overall, the Adventist Church in North America has 1,231,006 members worshipping in 5,493 churches and 853 companies, G. Alexander Bryant, executive secretary of the North American Division, said in a report after Jackson. He said church growth of 1.42 percent in 2015 was “really small” in comparison to some regions of the Adventist world church but was one of the fastest among Christian denominations in the United States.

Bryant reiterated concerns that he mentioned at the 2015 year-end meetings that a large number of members — especially young people — were leaving the church. He said 33 percent of members have left the church over the past eight years, a figure that is lower than the world church’s 49 percent but nevertheless deeply troubling.

The North American Division has taken steps to stem membership losses by making more intentional efforts to engage young adults. One of the sessions at this year’s meetings is about how to retain young people.

Jackson opened his report on Thursday by asking all division delegates under the age of 30 to stand at the front of the auditorium. He then invited the group — numbering about 15 — to choose a man and a woman from among themselves — “because in this division we believe in women and men, just like in other divisions” — to serve as “prayer interveners” during the meetings. His instruction to the two delegates was to "aggressively" intervene if discussions got too heated.

“You are spiritual leaders through prayer,” he said.

One of the young delegates promptly asked Jackson for permission to offer a prayer. Jackson quickly agreed, and the young man pled with God to lead the meetings.

“Help us not to be divisive,” he prayed.

Jackson said he hoped that attendees would leave the meetings filled with hope.