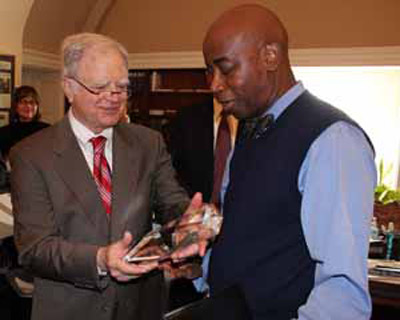 About a dozen leaders of Columbia Union’s
local conferences, university, and healthcare systems, recently grappled with
ideas on choice and separation of church and state during a symposium near Capitol
Hill. While the Adventist leaders were
guests of the Joint Baptist Committee on Religious Freedom (JBCRF), the focus
for the day was looking at religious freedom from a uniquely Seventh-day
Adventist perspective.

“I can’t think of any two groups that care
more about religious liberty,” said J. Brent Walker, JBCRF’s executive
director, when welcoming the group. “I’ve found it beneficial to work with
Adventists on this issue as we promote religious freedom for all of God’s
children.”

The three-lecture symposium was the brainchild
of Walter Carson, the union’s vice president and general counsel; and Gary
Ross, a public affairs and religious liberty consultant.

Carson noted that this day was the first of
its kind for the Columbia Union. “As leaders of the church, religious liberty
is an important component of our faith and this opportunity to get an in depth
lesson on this matter is not always available. We believe this day has equipped
us all to be better leaders,” he said.

Dwight Nelson, senior pastor of the Pioneer
Memorial Church and an adjunct homiletics professor at the Seventh-day
Adventist Theological Seminary in Michigan, began the day by discussing freedom
of choice and found biblical parallels to the American democratic system.

Jon Paulien, dean of the School of Religion at
Loma Linda University in California, titled his talk “America and
the End-Time in Prophecy: A Seventh-day Adventist Perspective.”

Although much of the day’s focus was on the
potential dangers of an entangled church and state, Doug Morgan, professor of
history at Washington Adventist University in Takoma Park, Maryland, spoke of A.
T. Jones, one of the first Adventists to make a foray into influencing
legislation. He pointed out that Jones’ efforts as well as Ellen White’s
writings support conscience-based activism.

Gary Ross summed up the lectures for the day
as “substantial, relevant and beautifully presented.”

Meeting With The Senate Chaplain

The group also met with Barry Black, an Adventist minister who has
served as the U.S. Senate chaplain since 2003. While there, Carson presented
the chaplain with an obelisk and thanked him for his “outstanding service to
his country and his church.”

Black told the church leaders that if they have
not taken the time to get to know their government officials, they were missing
a great opportunity to get more involved in their government. “These are the
last days. I challenge you to interact with our government authorities before
it is the last time,” he said. “Having been here with a front seat to history,
I have seen the difference that interaction can make when teaching the Word of
God.”

In reflecting on the day, Ron Halvorsen, Jr.,
president of the Ohio Conference, said the entire day was a reminder that
throughout Scripture, God placed spiritual people in the political arena. “We
have such a strong community stance on separation of church and state that
we’ve stayed at arms length from [government]. The presenters did a good job of
talking about how to be a spiritual voice for justice. And Dr. Black’s
challenge that we get to know our political leaders is a good reminder of
that,” he said. “The other reminder is that if people don’t know us, it’s
easier for them to stereotype us and what we believe. When they know us, we are
friends and they know we care. And who knows what difference it can make at key
moments.”