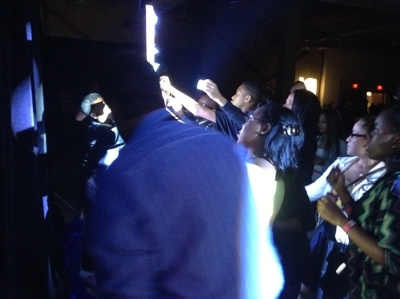 Friday evening
at JCI4, the Praise Team sang, over and over again, "Here I am to worship,
here I am to bow down, here I am to say that You're my God." And as they
sang the youth came forward, surging toward the cross that shone and seemed to
reach heavenward in a stretching column of light. This was no sinister cross in
flames. Instead, that image had become transmuted into that of a blazing shaft
of light shining skyward. Adventist youth by the scores came toward the light with
stickers that read "Hello! My name is."

Then Ruth came
on stage with a broom. She swept the floor and talked about the mansion she
lived in where the master bedroom had a walk-in closet with its own laundry.
The patio next to the pool was her favorite. She would give us a tour of the
place but she still gets lost trying to negotiate this mansion in Carmel,
Indiana. Ruth, as she tells us, is from Monterrey, Mexico. She had never ever
left her hometown before she met Michael. He was visiting Mexico and he
couldn't speak any Spanish besides what he'd learned from some dollar phrase
book. She stuttered her feeble English, and he stumbled over his pitiful
Spanish. And by the time she had helped him find where he was trying to go, he
had asked her out on her first date.

Ruth and
Michael got married and lived and loved for ten years. Then Michael died. But
Ruth still had her adorable mother-in-law, Naomi. Except that now all mother Naomi
seemed capable of talking about was going home. She didn't want to live in
Mexico any more. She wanted to go back, and she was going to go it alone. Ruth
wouldn't let her. Tough as it was, she said goodbye to her mom, her dad, her
neighbors and her homeland, so she could go with Naomi. Mother Naomi needed her.
She didn’t have a family any more. Everybody should have a family. They came to
Carmel, Indiana together. But it brought her to the toughest part of all.
Losing Michael and leaving Monterrey were nowhere as difficult as being the
foreigner with the wrong accent and no frijoles or tamales to eat, just burgers
and fries. She became desperate. She needed a Redeemer.

After Ruth, we
heard Pastor Lola Moore insist that the blood works. God hadn’t called her to
ministry because she was qualified, she had discovered. And in fact it had
taken her a while to get that. She was now on her second stint in pastoral
ministry. The first time around she had written a conscientious resignation
letter, convinced that she was not good enough. But now she could testify that
God’s purpose in calling us is not to affirm our goodness or talent or quality
or integrity. It is to prove that the blood works. The Tide commercials show us the effects of using their detergent. It
cleans grass stains, and dirt stains, and bloodstains. And so we are willing to
try it. Because it works. God wants people who show the world that the blood of
Jesus works. We must give Him that chance.

So we did.
Immediately. As NAD Youth Director James Black led his youth leaders to an
upper room he called the Garden of Gethsemane, hundreds followed and asked to
be ministered to, to be anointed and prayed for, so that God, in their lives,
could take complete control, and declare through them to the world, that the
blood works.

On Friday
evening at JCI4 we laid mighty claims to God’s power.