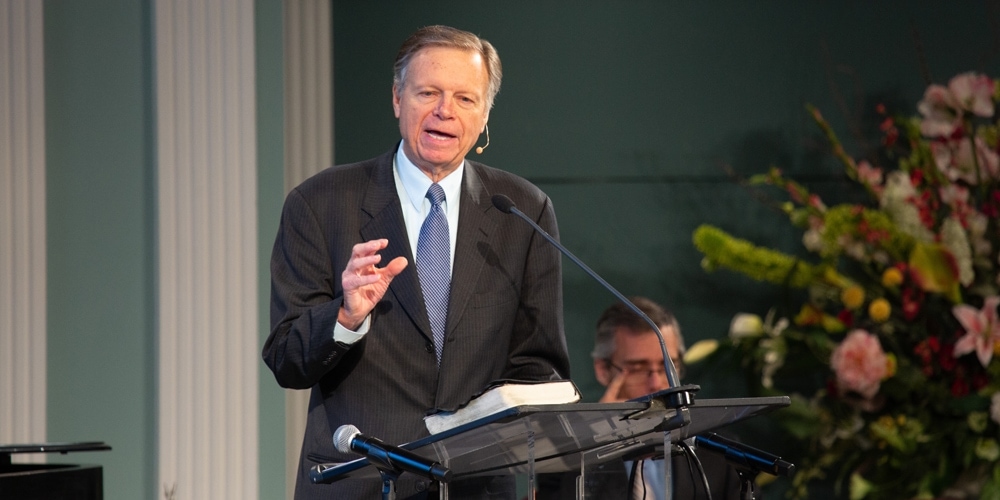 “Despite many challenges, God’s church will triumph,” said Mark Finley in his devotional message on the opening day of the Spring Council, a business meeting of the Executive Committee of the Seventh-day Adventist Church in Silver Spring, Maryland, United States, on April 10, 2018. “God’s church will rise to its destiny, and the gates of hell will not prevail against it.”

Finley, a seasoned evangelist and assistant to the world church president, based his message on Matthew 16:15, where Jesus asks His disciples, “Who do you say that I am?”

“This is a question for every heart,” he said. “It is a question every one of us has to answer.” And it is something, he acknowledged, that will inform the nature of our interactions with God’s church.

Current Challenges to the Church

Finley explained that wider contemporary issues present major challenges to a thriving church. “We live in a time of cynicism,” he said. “People distrust organizations.”

Opposition to church organization—in this case to Adventism—transcends ideological approaches, Finley said. “The far right and the far left have one thing in common—they are united in criticizing the church,” he said. “And no matter how conservative you are, there is another person ten times more conservative than you that will ‘shoot’ at you.”

The Church and Us

Finley explained that committing to the church does not mean being blind to its shortcomings. “The church is not perfect; there’s no doubt in many areas we could do much, much, much better,” he emphasized.

Indeed, part of being a leader is never be content [to be] where you are, because Jesus is always leading us to more, Finley said. “But if someone would write a book with all the faults of your wife, would you read it and not be ready to defend her?” he asked, in reference to occasional publications critical of the church. “The church is Christ’s bride,” he reminded his listeners.

Finley also reminded that the church is not a bureaucratic institution but is made up of people. And every one of us, he said, is a work in progress, as God chisels us until we become what He wants us to be. “The church does not come with stones fully polished,” he emphasized. “God is at work to build a temple of truth in which men and women reveal the character of God.”

A Commitment to Christ and His Church

No temple of truth is built with one stone, Finley explained. “While Jesus is the foundation, faithful men and women through the ages built upon that.”

Authentic faith demands a personal response to God’s calling, he emphasized. And that commitment is essential if we want to change the world.

“Education…science…military power…formal religion will not change the world. Only Jesus will,” he said. And as we try to become world changers, we must remember that only one thing can qualify us. “To know the living Christ, and to be changed by His grace and transformed by His love,” Finley said.

Once we meet Jesus, the church must move forward to accomplish the task set by the Lord Himself. Nothing should distract the church from it, said Finley. “God is appealing to His church not to be so focused on important administrative decisions that overlook the most important thing — preaching the living Christ.”

The Future of the Church

Whether we decide to support God’s church or fight against it, the church’s survival is guaranteed because of God’s grace, Finley emphasized. Sharing important lessons from Ephesians 5, he reminded that despite its mistakes and weaknesses, Jesus loves His church, and He promises to sanctify and cleanse it. “And the future of God’s church is glorious,” reminded Finley, “because He has promised to present His church blameless.”

According to Finley, it is an encouraging thought. “The church of God, the people of God, the truth of God will triumph,” he said.