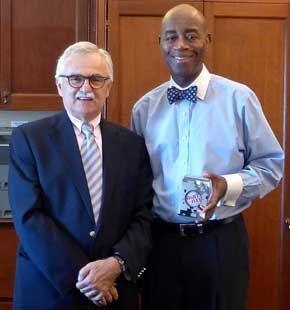 BY RAJMUND DABROWSKI and DORIS BURDICK, Christian Record Services for the Blind

InSight4Vets, a unique thank-you gift initiative for blinded veterans, was introduced on Tuesday, September 17, 2013, by an organization building on a century-plus of innovative service to individuals who can’t see.

“Together we saw a need. It connected perfectly with what we do best. Now it’s our privilege to share this gift with those coming home from military service without sight,” Larry Pitcher, president of Christian Record Services for the Blind (CRSB), told the CRSB board of directors at their recent meeting.

Sparked by news reports of the prevalence of eye wounds from the wars in Afghanistan and Iraq, the initiative caps months of research, collaboration, audio production, and planning. Eye trauma—from penetrating wounds and traumatic brain injury (TBI)—has been identified as the second most common injury among active military. Serious eye wounds have accumulated at almost twice the rate as wounds requiring amputations. Traumatic eye injuries have accounted for upwards of 16 percent of all injuries in Operation Enduring Freedom and Operation Iraqi Freedom.

“What could we do about it? . . . Something to show we care? . . . Something to encourage?” asked Pitcher, then elaborated, “Unfortunately, an unseen wound of war—the inner anguish of sight loss—often becomes greater than the physical injury itself.” Then he explained, “It’s to address these emotional, social, spiritual, and moral injuries that inSight4Vets was developed. Including noncombat vision loss or loss in earlier conflicts, about 157,000 blind veterans and 1 million partially sighted vets are spread across our country, and we care about every single one of them.”

Available exclusively to these blinded veterans, at the heart of inSight4Vets is a pocket-size solar audio player preloaded with a special collection of books. “The books were chosen for their interest and inspiration. It’s a mix of lighter and heavier reading, to see veterans through perhaps the most difficult season of their lives, adjusting to their ‘new normal,’ ” Pitcher said. “The audio player’s filled with stories; stories about overcoming during the worst possible circumstances, stories of survival, stories of hope, and stories of transformation.”

“When I received the player, my first reaction was this: Such a small device but so much goodness in it!” says George Haley, blind veteran from Dowagiac, Michigan, and a consultant for the project. “In a small package I can carry with me a great amount of material that’s encouraging, entertaining, educational, and inspiring.” The audio player, smaller than an iPhone, is packed with seven complete audio books, about 100 hours of listening. It can be charged by the sun or other light source, through USB cable, or with the plug-in charger provided.

“As grateful as we are, and as much as we would like to, we cannot restore sight to veterans who have lost it. But we can give them insight and hope as rays of inner light through this ‘library in your pocket’ player,” comments Dick Stenbakken, a retired U.S. Army chaplain whose bestselling book, The Centurion, is included in the player. “This unique initiative will change lives,” he adds.

The “contents list” for the inSight4Vets player also includes
Take the Risk, by Ben Carson; Unbroken, by Laura Hillenbrand; The Blessings of Adversity, by U.S. Senate chaplain Barry Black; Hope Unseen, by Captain Scott Smiley; The Book of Job: When Bad Things Happen to a Good Person, by Rabbi Harold Kushner; and No Greater Glory, by Dan Kurzman, as well as offering portions of Scripture—the four Gospels, Psalms, and Proverbs.

“By providing such an important service, Christian Record is contributing to mending a hole in a social safety net by reaching out to a small—yet so very important—group of people,” commented retired U.S. Army chaplain Gary Councell. Christian Record envisions cooperation with a number of organizations whose mission is to serve blind veterans.

Summing up Christian Record’s motivation for developing inSight4Vets, Pitcher states: “All of us benefit from the strength, courage, and talent of those who invested in military service. Many did so at great sacrifice. As an inSight4Vets digital player reaches a blinded veteran, we hope it will bring with it our love, appreciation, and encouragement.”

Initial start-up support for the inSight4Vets project came from individual donors and a Versacare grant. Among cosponsors of inSight4Vets is the Adventist Chaplaincy Ministries (ACM) in Silver Spring, Maryland.

Innovation to meet specific needs has been a hallmark of Christian Record Services for the Blind since 1899. That same year Austin Wilson, a blind man in his early 20s, took a hand-cranked clothes wringer like his mother used on washdays, then fed through it a hand-embossed metal plate and a sheet of heavy paper to produce the first page of a braille magazine he titled
The Christian Record. Today as one of 10 braille, large-print, and audio magazines produced by Christian Record for blind and partially sighted readers, it holds the record as the longest continuously produced braille magazine in the world.

To access more information about inSight4Vets, including how to donate to the project, go to: www.insight4vets.org.

Magazine Article
​Our Priceless Instruments
The mystery of voices joined—in unison; in harmony!