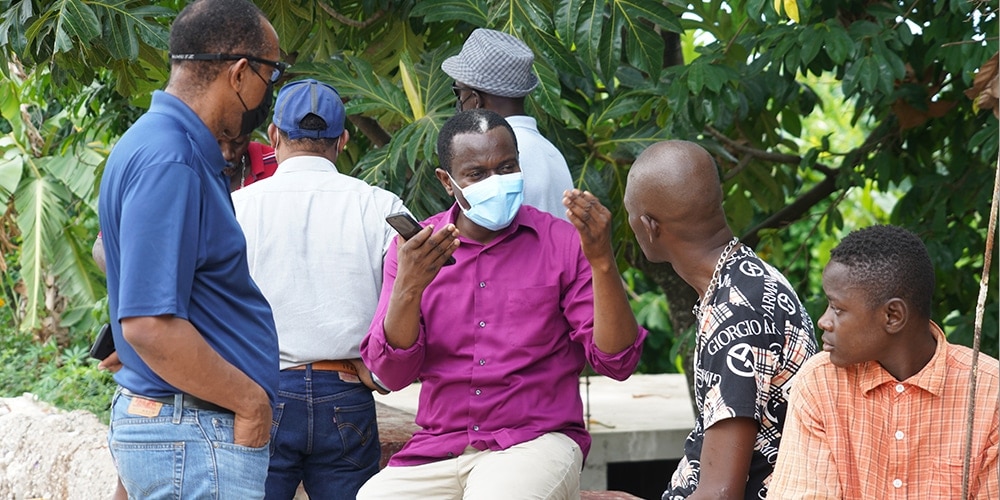 A group of Seventh-day Adventist chaplains from the French-speaking territory of the Inter-American Division (IAD) went on a mission to minister to victims of the recent earthquake that devastated the southern peninsula of Haiti. The chaplains offered emotional and psycho-social support to more than 400 people from September 9 to 17, 2021.

Asnel Valcin, director of Pastoral Care and Education at St. Johns Episcopal Hospital in Rockaway, New York, United States, and instructor for Adventist Chaplaincy Ministries (ACM), invited several Adventist chaplains from Haiti and from the French Antilles and French Guiana to participate. Since April, the chaplains have been receiving training in clinical and pastoral education, and it was fitting to give them an opportunity to provide much-needed assistance, Valcin said.

“We prayed about this mission trip, and God opened the doors for us to fly to the commune of Les Cayes from Port-au-Prince thanks to donations from friends and colleagues and members of the Adventist Church in Brooklyn, as well as the help of several local church and government leaders who believed in our mission to Haiti,” Valcin said.

“The first night, we met with local pastors and leaders in Les Cayes to explain the purpose of the visit,” he explained. “One local pastor had just returned from leading his eighth funeral and was anxious for his congregation, which had been experiencing so much physical and emotional devastation.” They began talking to several members who approached them and were grateful to share their story of survival and know that someone cared for their emotional well-being, Valcin said.

The chaplains’ journey throughout the town revealed many people who were eager to share their stories. “People expressed feeling liberated after sharing their stories,” Valcin said.

For Esaïe Auguste, chaplaincy ministries director for the Adventist Church in the French Antilles-Guiana Union Conference, the experience was like no other during his seven years in chaplain certifications. “We felt overwhelmed by the scene of misery in which the people were living and the hopelessness and resignation many of the people were facing,” he said.

He vividly remembered a young woman who had planned to go to university to pursue medical studies. “She had lost her mother in the earthquake after the house buried her,” Auguste said. Now she has to care for her three younger brothers and said that her dreams had been shattered in less than a minute. “She told us that for the first time since the August 14 earthquake, she felt heard and could express her emotions,” Auguste said.

Word of the chaplains’ mission spread to several other congregations. Leaders of a Catholic church, which was holding a funeral service for earthquake victims, invited the chaplains to speak to their members, Valcin said.

“We saw so many who were willing to talk about trauma,” Valcin said. “People have had serious emotional challenges that have been repressed for many years, and when they saw this open door to share, they poured out their hearts to us.”

One pastor pleaded for the chaplains to come to his congregation, Valcin said. When the group of chaplains arrived the following morning, more than 250 people were waiting.

Each of chaplains saw an average of 41 people each day, and their primary purpose was to listen deeply and help them tell their stories. “Conversations bring healing; persons experience relief in just having someone who cares enough to listen to them, and that begins the process of transformation,” Valcin said.

The chaplains also visited a local hospital, where they spoke to medical staff and health professionals. One particular nurse was fatigued from working so hard in caring for patients. “She was surprised at our visit and was so thankful to be heard,” Valcin shared. “She soaked up every moment we were with her and was thankful for the time we took to listen to her and help her express her experience.”

The team of chaplains took the time to preach in several Adventist congregations on September 11. Members were given the opportunity to share their stories. “We were worshiping in the church building, which the earthquake had completely destroyed, and after preaching to a small group, I individually counseled most of the members there,” Auguste said. “They were able to recall their story and put into words their suppressed emotions.”

“One could read the smiles on the faces of the people in the different communities that we visited,” Richner A. Fleury, chaplaincy ministries director for the Adventist Church in Haiti, said. Fleury, along with the seven other chaplains from Haiti, said they were blessed by the experience. “We heard so many words of satisfaction from the lips of those to whom we listened and supported. I know God will continue to help us care for the well-being of those affected,” Fleury said.

In addition to providing emotional support, Valcin and local church leaders distributed 110 tents and 110 air mattresses to those still living out in the open air.

The trip took a lot of coordination and funds, but it was an excellent opportunity to impact hundreds of people in dire need of attention, according to Valcin. It was an opportunity that could not be passed up, he added.

Answering the Call to Mission

“When God calls you, He prepares you for the mission,” Valcin said. “Regardless of where we are in the world, we have our humanity as the one thing in common.” There are many faces he cannot stop seeing, stories he cannot release from his mind, he said. “This mission trip helped us understand how God truly used us in our humanity to connect with other people. I am humbled by this opportunity to serve.”

The intervention in Les Cayes was only scratching the surface of the needs, Valcin pointed out. Still, it was one that will bring more awareness to the needs of the people in the aftermath of any disaster, Pierre Caporal, president of the Adventist Church in Haiti, said.

“This intervention by Dr. Valcin and the group of chaplains from the French Antilles-Guiana Union will for sure make an indelible impact on our church members and persons in the community who were helped, and on our chaplains, who took part in this important ministry,” Caporal said.