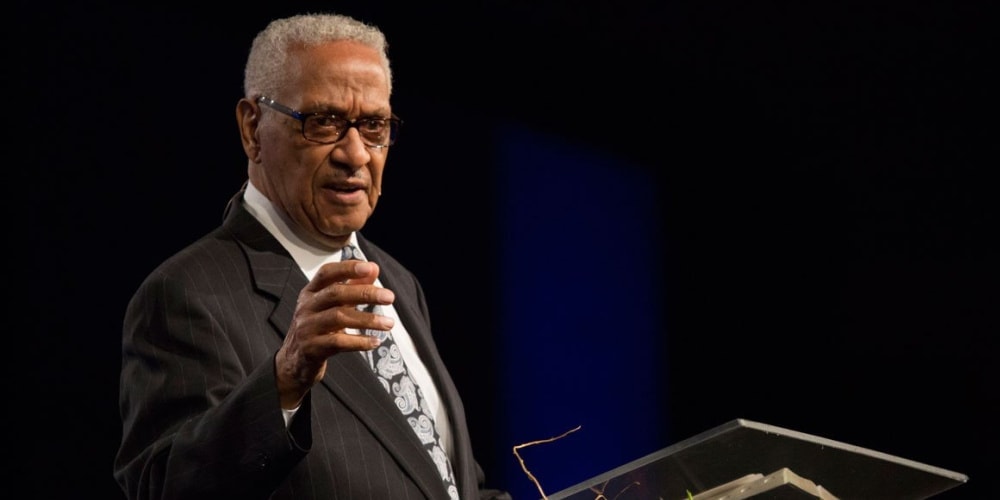 Charles D. Brooks, one of the foremost Seventh-day Adventist evangelists of the 20th century, succumbed to pancreatic cancer on Sunday. He was 85.

Brooks, better known as C.D. Brooks, led a 60-year ministry that resulted in more than 20,000 baptisms on six continents and was known for its innovative methods of embracing new media to spread the gospel, including through the Breath of Life television ministry, where Brooks served as founding speaker for 23 years.

Brooks, who disclosed earlier this year that he had been diagnosed with pancreatic cancer, died at 4:30 a.m. June 5 in Laurel, Maryland, said his son, Charles D. Brooks Jr.

“Please keep my mother and family in prayer,” he said in an e-mail.

Ted N.C. Wilson, president of the Adventist world church, paid tribute to Brooks as “an eminent and much-loved senior statesman in the Seventh-day Adventist Church.”

“He was a highly dedicated and successful evangelist and biblical preacher,” Wilson said. “Elder Brooks loved the Lord, His prophetic church, and the Advent message.”

Wilson said he counted Brooks and his wife, Walterene, as longtime family friends, noting that they had worked closely with his own parents. Wilson’s father, Neal C. Wilson, served as president of the Adventist world church from 1979 to 1990.

“He and his wonderful wife, Walterene, have dynamically influenced literally thousands and thousands of people worldwide. Elder Brooks has been a great encouragement to me personally,” Wilson said.

“The church is greatly saddened by this profound loss, and we wish Mrs. Brooks and the entire Brooks family our heartfelt sympathy and Christian love,” he said. “We look forward with great hope to Jesus' soon coming when we will see Elder Brooks again.”

Charles Decatur Brooks was born on July 24, 1930, outside Greensboro, North Carolina, as the 10th child of Marvin and Mattie Brooks.

Six months later, his mother learned about the Seventh-day Sabbath while lying on what she thought was her deathbed after an unsuccessful surgery. A bright light filled her hospital room at night, and a voice said, “Mattie, I want you to keep My commandments,” C.D. Brooks told the Adventist Review in 2006.

Mattie Brooks, a faithful Methodist and the daughter of a pastor, was confused.

“Lord, which one am I not keeping?” she said.

She heard no answer. But suddenly the fourth commandment sprang to mind: “Remember the Sabbath day to keep it holy” (Exodus 20:8).

Mattie Brooks made a miraculous recovery and began keeping the seventh-day Sabbath in her home from midnight Friday to midnight Saturday. She knew of no other Sabbath-keepers for the next 10 years.

“Never heard of Adventists,” C.D. Brooks said in the interview. “She had no tracts, no teacher, no Bible study, no anything.”

Her Methodist minister and others church members tried to dissuade her from keeping the Saturday Sabbath. But when the head deacon saw that she would not change her mind, he presented her with a wrapped copy of The Great Controversy by Adventist Church cofounder Ellen G. White. Young C.D. Brooks opened the package with a pair of scissors, and his mother read it with great interest.

Then when C.D. Brooks was 10, a Seventh-day Adventist literature evangelist knocked on the family’s door with some books. The very next Sabbath the family was worshipping in an Adventist church for the first time. Brooks recalled that a large copy of the Ten Commandments had hung on the wall of the church, and that it had left a big impression on him.

The family began to observe Sabbath from sundown Friday to sundown Saturday.

Read a life sketch of C.D. Brooks by his biographer Benjamin Baker

How Brooks Became an Evangelist

C.D. Brooks realized his calling to evangelism when as a 17-year-old recent high school graduate he attended meetings by Adventist evangelist Earl E. Cleveland in Greensboro. Brooks had been planning to study dentistry in the fall.

“Two Sabbaths before Cleveland closed, I was sitting in his tent by myself on a beautiful sunny day, and an overmastering impression came from the Lord that said to me, ‘This is what I want you to do, and I will help you to make truth clear,’ Brooks said.

“I didn’t know the power of a mother’s prayers,” Brooks said. “Mother said these words to me: ‘Son, when you were born, I gave you to the Lord. Now He’s calling you.’ Wouldn’t you think she would have shouted, or shed tears, or something? She did none of that. She went on about her business, running a household and serving the Lord. And from that moment I have never looked back.”

Brooks certainly never looked back. With unexpected financial support from his father, who previously had not showed interest in the Adventist message, Brooks enrolled in Adventist-operated Oakwood College (now Oakwood University) in Huntsville, Alabama, and completed four years of studies there.

Upon graduation, the Adventist Church’s Allegheny Conference hired Brooks as a tentmaster for J. Dasent, a former conference president serving as an evangelist in Delaware. Dasent asked Brooks to preach his first sermon.

“I think it was a test,” Brooks said in a 2009 interview with the Adventist Review. “But the Lord blessed, and when we concluded the campaign and were returning to headquarters, Dasent was kind enough to give me the highest recommendation.”

Brooks was asked to run his first full evangelistic series the next summer, in 1952, in Chester, Pennsylvania.

“I had a great, exciting summer,” he said. “We had a little church there, 22 members. I love telling young guys, ‘First campaign we doubled the membership.’ They look at me in awe, then I tell them, ‘We had only 22 members.’”

Brooks led eight- to 10-week evangelistic meetings for the next dozen years in Delaware, Pennsylvania, New Jersey, and Ohio. He then accepted an administrative position as general field secretary of the Columbia Union Conference but continued to lead major evangelistic meetings in big cities such as Chicago, Cleveland, and Philadelphia.

“If you have heard C.D. Brooks preach, it was most certainly an unforgettable experience,” authors Benjamin Baker and Harold L. Lee wrote in their 2013 biography C.D.: The Man Behind the Message. “His distinct voice trumpets truth with an authority rarely seen in today's pulpits. The stories he skillfully weaves thrill the imagination and bring conviction to the heart. Loving yet uncompromising, Brooks delivers the Adventist message without apology. His appeals to accept Jesus reverberate in the mind long after they are over.”

In 1971 Brooks became a general field secretary of the General Conference, the administrative body of the Adventist world church, but still led evangelistic meetings, eventually traveling to six continents.

“I didn’t want to go to Antarctica because there was no one to preach to,” he said.

In 1974 Brooks was asked to be the founding speaker for Breath of Life, a television ministry being developed for African-American viewers. In that role Brooks led three or four evangelistic campaigns every year, establishing 15 congregations.

His work at Breath of Life and elsewhere put him on the cutting edge of technology, according to C.D.: The Man Behind the Message.

“A media trailblazer, Brooks has spread the gospel through every type of media, including cassette, radio, television, and Internet,” the book says.

He led more than 20,000 people to Christ, Baker told the Adventist Review.

“When we think of lighthouses, we often forget those who work to keep them shining,” Carlton Byrd, the current speaker of Breath of Life, said by e-mail. “Pastor C.D. Brooks kept the light shining. He attended the flame of truth, compassion, and love, and that ministry forever changed the world. He epitomized the words of Jesus, ‘Let your light so shine before men, that they may see your good works, and glorify your Father which is in heaven’ (Matthew 5:16).”

Byrd said he would long remember many moments with Brooks but was most astounded at his faith as he struggled with cancer.

“The magnitude of his faith in the face of adversity is what I consider most outstanding,” Byrd said. “The most memorable moment for me with this great man of God was when I recently visited him and discussed the health challenges he was experiencing. He assured me, ‘Carlton, if God wills to heal me, He will heal me. If not, I accept His will. “I know in whom I have believed”(2 Timothy 1:12).’”

The funeral will be held on Sunday, June 12, at the Sligo Seventh-day Adventist Church in Takoma Park, Maryland, the Columbia Union Visitor reported. The viewing will take place 11:30 a.m. to 1 p.m., followed immediately by the funeral. Sligo will livestream the funeral at sligochurch.org.

C.D. Brooks is survived by his wife of 63 years, Walterene; two children, Charles “Skip” Jr., and Diedre; and three grandchildren.

Brooks retired from active ministry in 1996 because of health issues but kept office hours at the General Conference for years.

In 2007, Oakwood University named its Bradford-Cleveland-Brooks Leadership Center in honor of him, Earl E. Cleveland, and Charles Bradford, former president of the North American Division.

Brooks was appointed chaplain of the North American Division in 2013.

Daniel R. Jackson, president of the North American Division, said he had watched Brooks with admiration as he walked the halls of the division, which shares its headquarters with the headquarters of the General Conference in Silver Spring, Maryland.

“He was a great preacher and one of God’s true saints,” Jackson said. “I have watched him walk the halls of our office and used to repeat in my head, ‘He is a prince among men.’ I will miss him. But one day soon he will have eternal youth and live forever with his dear wife and family.”