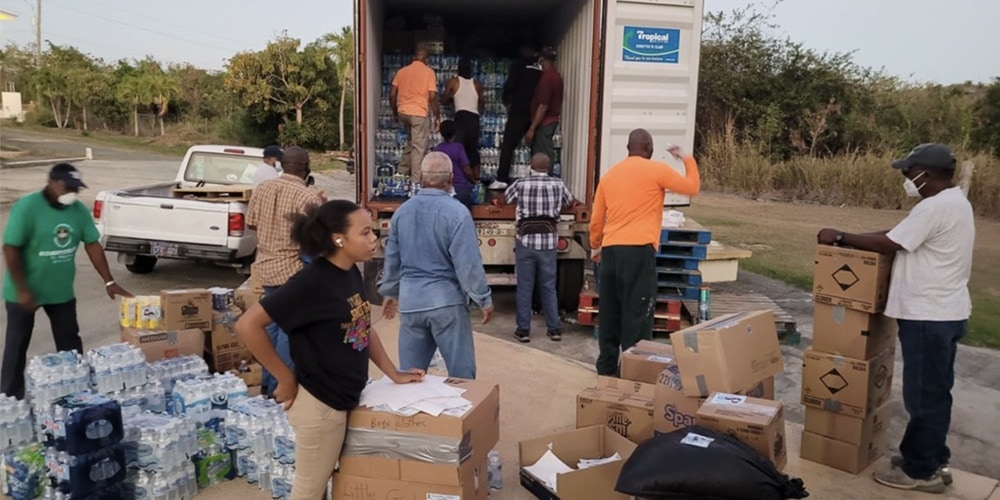 Seventh-day Adventists across 10 islands in the northern Caribbean region recently joined forces to provide urgent assistance to the hundreds of people displaced by the eruptions of La Soufrière in St. Vincent and the Grenadines. The volcano, which had been dormant for more than 40 years, sent lava streaming down the mountain and engulfed the southeast Caribbean’s atmosphere with toxic ash in April 2021.

“We have discovered there are still major gaps in basic needs, including food, water, hygiene, cleaning kits, and personal protective equipment,” Isaac Alexander, health ministries director for the Caribbean Union Conference territory. “The needs are widespread, and we are working around the clock to get these essential items to those impacted.” At the start of the eruptions on April 9, more than 20,000 people were displaced and unable to return to their homes.

After the initial eruption, the Adventist Development and Relief Agency (ADRA), through its North Caribbean Conference director, Wilmoth James, collaborated with the region’s Community Services leaders to commission a prompt response to alleviate the discomfort of residents on St. Vincent and the Grenadines. Leaders also collected a special disaster offering throughout all its congregations on April 24.

“Many of you have watched the heartbreaking pictures of the effects that this seismic activity has had on the people of St. Vincent,” Desmond James, president of the North Caribbean Conference of the Seventh-day Adventist Church, said as he appealed to church members across the region earlier last month. “We are extremely grateful and thrilled by the robust response as the peoples of the North displayed a massive, compassionate response in cash and other assistance to our brothers and sisters in disaster.” Already, church leaders have distributed the supplies to those affected.

Wilmoth James noted that ADRA emergency teams worked on the ground to mobilize members to support the need on the island of St. Vincent. “We are grateful to God for members coming together for this mission of mercy,” he said. “We believe that several factors contributed to the response, including the structure set up by ADRA over the years in the island territories, ADRA depots established on every island to activate during emergencies, and the generosity of church members.”

Wilmoth James acknowledged that members across his territory know what it means to sleep “without a roof on their head and to be in need of water.” He added, “The fact that there is a spirit of generosity still alive in the membership of the North Caribbean Conference is wonderful to see.”

Donated supplies continue to be distributed to the people at the 10 shelters overseen by the Adventist Church in St. Vincent and the Grenadines. Additional supplies were provided to the daily feeding program still ongoing by the church on St. Vincent.

Church members in the North Caribbean Conference will continue to raise funds to support residents in the aftermath of the volcanic eruption in the days and weeks ahead.