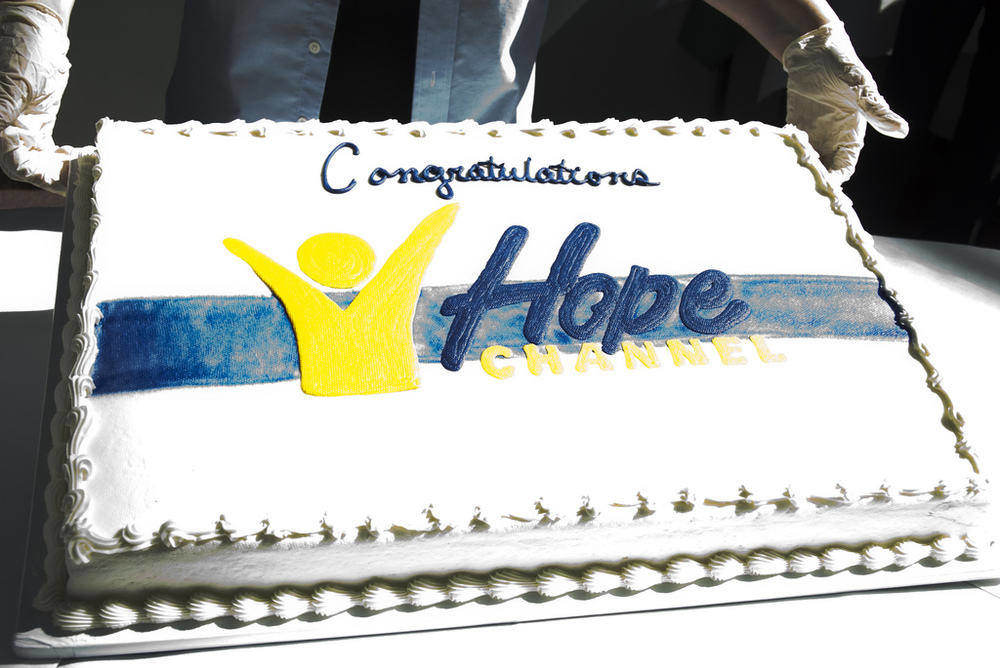 Brad Thorp, who has steered the Seventh-day Adventist Church’s Hope Channel from its origins as a NET satellite uplink in the 1990s to becoming a global television network, is stepping aside as president.

Thorp told a meeting of Adventist world church leaders on Thursday that he had led Hope Channel to the best of his ability over the past 22 years and wanted his successor to take it to the next level, according to those present.

He also likened Hope Channel to being a fourth child in his family, saying he had raised the channel and, like with his own three adult sons, was ready to let it go.

“Having been with Hope Channel from the beginning and sharing in all the stages of growth, we feel like Hope Channel is one of our children,” Thorp told the Adventist Review on Friday.

His wife, Kandus, Hope Channel’s vice president for international development, added: “Hope Channel has never been ‘ours,’ but we have had the sacred privilege of nurturing and developing it, and God has abundantly blessed. We have witnessed so many incredible miracles and answers to prayer. It is a humble privilege to be a part in this ministry.”

Hope Channel’s board of directors will set up a search committee with the goal of recommending a candidate as president on April 11, church leaders said. That date falls during the Spring Meeting, an annual, weeklong business meeting of the Adventist world church at its headquarters in Silver Spring, Maryland. Hope Channel’s main offices occupy a south wing of the headquarters.

Thorp will continue with his responsibilities as president until a successor is chosen.

Ted N.C. Wilson, president of the Adventist Church, said Brad and Kandus Thorps’ commitment to take “a small, initial idea of part-time satellite broadcast and turn it into an extensive 24/7 international television network is a testimony of hard work, determination, creativity and complete trust in God’s power to miraculously open doors for the proclamation of the three angels’ messages around the world.”

“We thank God for the blessings He has provided through the talents and dedication of Brad and Kandus Thorp,” Wilson said. “The greatest achievement, for which we give God all the glory, is the evangelistic results from the outreach of Hope Channel. This is Brad’s passion: seeing souls won to the Lord. I know that God will continue to bless Brad’s ministry of evangelistic outreach as we see the fast-approaching return of Christ.”

His sentiments were echoed by Guillermo Biaggi, board chair of Hope Channel and a general vice president of the Adventist world church.

“We praise the Lord and express gratitude to Elder Brad Thorp and his wife, Kandus, for allowing the Holy Spirit to guide them in creating Hope Channel as a worldwide television network on behalf of the Adventist Church,” Biaggi said. “We want to ‘Reach the World’ with a message of hope, peace, and love, and Hope Channel through its 43 channels is helping millions to get acquainted with this wonderful, Bible-based message.”

“Reach the World” is the title of the Adventist Church’s strategic, five-year plan for 2015 to 2020.

Thorp said he might assist in the implementation of some “Reach the World” initiatives after Hope Channel. Kandus Thorpe will continue overseeing new channel development and other projects for the time being.

Read: What You Need to Know About the Adventist Church’s New Strategy

Thorp, a native of the Canadian province of British Columbia, first got involved in religious television programming in 1993 when the world church leaders asked him to coordinate NET 95, a satellite uplink that ended up ushering the church’s public evangelism meetings into the digital era. At the time, Thorp had served the previous nine years as associate ministerial secretary and director of the Mobile Evangelism Institute at the church’s Swiss-based Euro-Africa Division.

The hugely popular NET 95 beamed presentations by evangelist Mark Finley from Chattanooga, Tennessee, into church sanctuaries across the United States and elsewhere in 1995.

“God abundantly blessed this first event, and for NET 96 I coordinated the event for the Euro-Africa Division,” Thorp said. “We had more than 600 locations participate and many thousands of baptisms.”

Finley led NET 96 from Forest Lake Academy near Orlando, Florida. In all, more than 1,500 churches participated in North America and an additional 2,000 churches were involved in other parts of the world. The series was translated into 14 languages.

“This is the closest to the day of Pentecost that I have ever seen,” he said, referring to the outpouring of the Holy Spirit depicted in Acts 2:1-13. “Amazing! In NET 98, we had 40 translators simultaneously translating Dwight Nelson in our global broadcast. The Holy Spirit’s presence in those rooms was incredible.”

By 2010, the NET events had contributed to more than 2 million baptisms around the world, Thorp said.

After a number of successful NET events, thousands of churches found themselves equipped with often-idle satellite equipment and began calling for full-time broadcasts, Thorp said.

The Adventist Church selected the name “Hope Channel” in 2002, and the first full-time channels began to broadcast in 2003: one in Brazil for South American viewers and the other for the rest of the world. Today, Hope Channel’s 43 full-time channels broadcast in 41 languages, including Spanish, Portuguese, German, Romanian, Mandarin, Russian, Tamil, Hindi, Ukrainian, Arabic, Farsi, and Telugu. Six more channels are currently in development.

“This has entailed tremendous ownership by the world church and the support to create these channels,” Thorp said.

He applauded the “tremendous” support of Adventist Church presidents Folkenberg; his successor, Jan Paulsen; and Wilson, as well as the world church vice presidents who have chaired the channel’s board and the treasurers who have assisted in funding basic salaries and operating costs.

The channel’s donors, however, deserve special praise for funding the programming, 95 percent of which is produced in-house, he said.

“Without the liberal gifts of tens of thousands of donors around the world, Hope Channel would not exist and continue to grow,” he said.

The Hope Channel network has nearly 100 media centers that produce local programming, and it has more than 1,000 full-time staff members worldwide.

Thorp marveled at the sacrificial work of many workers, recalling one team that took turns sleeping in a broadcast control room for months, waking every 30 minutes to load another tape and then working throughout the day as well.

“What stands out in my mind is the incredible work of the Holy Spirit in inspiring so many people to work together to create and broadcast programs,” he said. “The teamwork is amazing, and we are thrilled to see these individuals empowered, equipped, enabled, and supported by the church to minister through the media of television.”

Finley, Hope Channel’s chair from 2005 to 2010 and currently its vice chair, described Thorp as a leader with “faith, commitment, a willingness to sacrifice, and vision.”

“Brad played a significant part in visioning the possibilities of taking NET evangelism internationally,” he said. “Brad has a significant passion for winning the lost to Jesus Christ. I’ve always appreciated his heart for souls for the kingdom of God.”

Finley said Thorp has seized every opportunity to broaden the network internationally. He recalled that Brad and Kandus Thorp repeatedly told him that Hope Channel needed to have a presence in India if the Adventist message was to reach the country’s population of 1.2 billion.

“I wondered how it might be possible to have Hope Channel in the many languages of India,” said Finley, who spoke with the Thorps about India while conducting evangelistic meetings in the city of Chennai from 2000 to 2012. “But today it’s a reality largely due to Brad and Kandus’ commitment.”

What lies ahead for Hope Channel will rest in part in the hands of its next president. But Thorp said he was grateful for being given the opportunity to expand the church’s evangelism efforts beyond programming in churches to home viewing.

“The full-time broadcasts jump past gatekeepers so viewers can directly learn and understand our message and lifestyle,” he said. “Over time, viewers come to have confidence in our message and often respond by being baptized.”

Profile
Media Ministry Is Transforming Lives in Fiji
Despite lockdowns and restrictions, more than 600 have been baptized in 2021.
Commentary
Ted Wilson’s Philippines Trip Was ‘Just in Time’
From visas to rain and a helicopter, God’s timing is called perfect.
Commentary
A Day on the Road with Ted Wilson
Five sermons and a road scare do not tire Adventist Church leader.