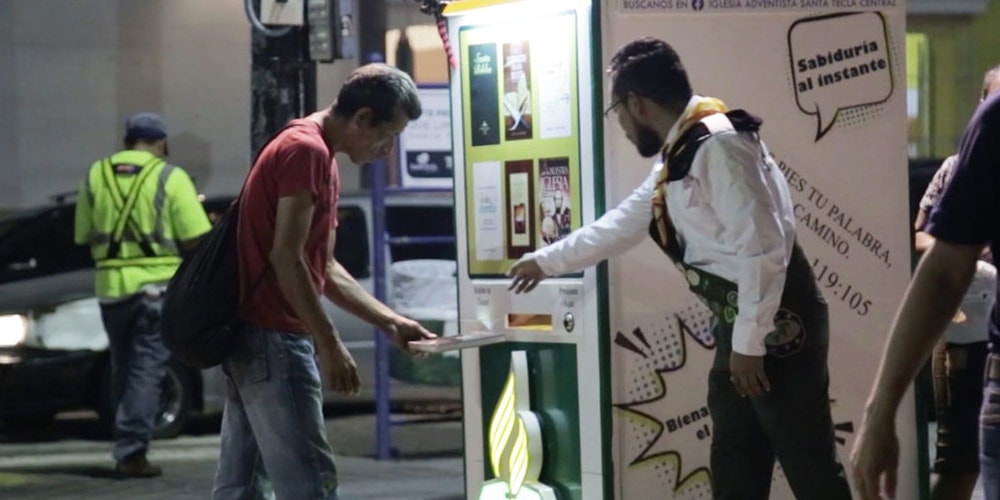 Azucena Quintanilla wanted to make a difference in her local Seventh-day Adventist church. She wanted to engage more members in spreading hope in the community of Santa Tecla, a municipal district in La Libertad in San Salvador, El Salvador.

Quintanilla, 21, wanted to have a free Adventist book dispenser placed in the middle of the town’s main park. Operating it would be as simple as pressing a button for a free book or magazine. She brought her idea to the church board and the members, and she invited them to bring new and good-as-new books and devotionals for sharing with anyone who wanted a free book.

Books and missionary magazines were collected and dispensed from a specially made stand, complete with a button, lights, sounds, and a sign.

“The dispenser cost us just US$40 to build from materials recycled from a wooden airplane that was used during one of our Vacation Bible School events,” Quintanilla said. A church member helped build it, and another member, an electrician, worked on the button and lighting.

Church leaders spoke with municipal leaders about the idea, and arrangements were made to make the book dispenser available for three Saturday evenings — November 16, 23, and 30, 2019. “The idea sparked so much interest among municipal leaders that they approved those three days for the activity,” local church organizers said.

Each magazine or book contained a note with a positive message, the logo of the Adventist Church, social media contact information, and an invitation to visit the nearest Seventh-day Adventist church.

“It caused such a stir at the park,” Quintanilla said. “Many people were so curious to press the button and get a free book, or a Bible, or whatever came out.”

“I think this was a new way of getting people’s attention, similar to a vending machine,” said Carlos Hernandez, an onlooker who got a free Bible. “I love to read. I will see how this version of the Bible is and will come back next Saturday to see what I can get.”

The dispenser was scheduled to be available from 6:00 to 8:00 pm, but by 7:30, all the books and magazines had been given away, Quintanilla said.

A total of 50 Bibles, 570 Adventist books, and more than 400 magazines were given out for free through the unique initiative.

Quintanilla said she was challenged during a recent Adventist communication congress to think of innovative ways of getting more members involved in connecting with the community. She said she was thrilled with the results of the literature project and thanked church members who got involved.

She said plans are in place for additional free book dispenser activities in several towns and communities in the coming months.