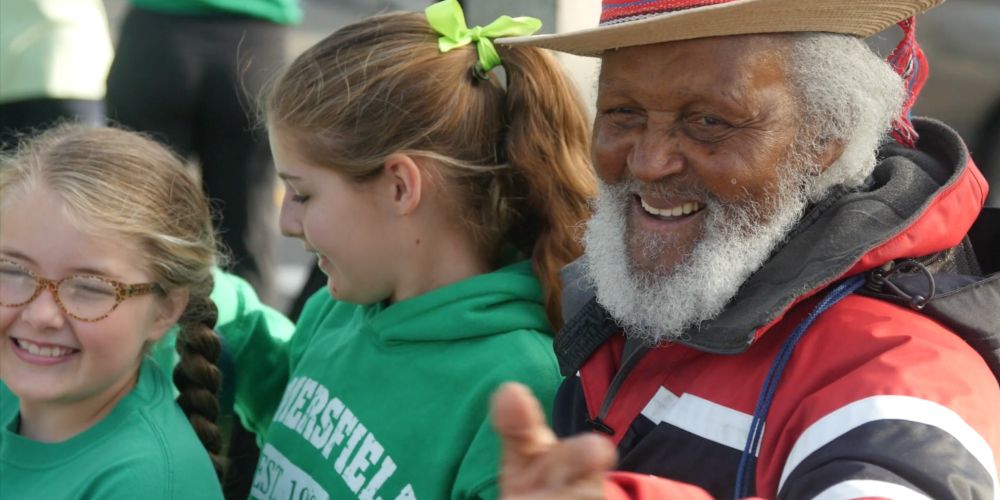 Editor’s note: This report about the death of Johnny Barnes, whom the North American Division (NAD) says “played a key role in helping make the Seventh-day Adventist Church a fixture” in Bermuda, is republished courtesy of the island’s Royal Gazette newspaper. A NAD statement and video are appended to this report.

By Jonathan Bell and Adam Zacharias, The Royal Gazette

Bermuda has bid farewell to Johnny Barnes with a regal funeral in tribute to “Mr. Happy,” an ambassador for the island known worldwide.

Bermuda Institute schoolchildren lined roadsides around his customary place at Crow Lane to cheer his funeral procession on its way to St. George’s Town this week.

The school’s auditorium earlier hosted a service of hundreds, including Michael Dunkley, the premier, and Governor George Fergusson, with guests paying final respects before his cedar casket.

Many sported bright colors in keeping with Mr. Barnes’ wishes.

John James “Johnny” Barnes died on July 9 at the age of 93, with his wife of 65 years, Belvina, at his side. She sat with family at the front row.

Fergusson explained how he, like tens of thousands of others, experienced the “lifting of the spirits that came with Barnes’s cheery, no-strings early morning greetings.”

His altruistic benevolence was not aimed at “fame, wealth or pushing a cause, other than the Christian message of love thy neighbor,” Fergusson said.

Recalling hearing Barnes’ message for the first time during a morning milk run 30 years ago, Dunkley thanked the Barnes family for providing an ambassador — and hailed a “remarkable and original man who impacted the lives of many, in ways that we are still coming to understand.”

Barnes’ well-wishing went back far longer than the oft-quoted year of 1986, Rosemary Tyrell told the gathering on July 18.

She recounted how, decades earlier, he would cheer to the students coming into Hamilton from the wall of the old bus depot, “waving to us like we were royalty.”

During British Queen Elizabeth II’s last visit to Bermuda, Barnes told her that he loved and prayed for her, with the queen responding, “And I love you, too.”

There were travelers who visited Bermuda simply to see Barnes and share his compassion, pastor Randolph Wilson said.

Introducing a film tribute to him, “Mr. Happy Man,” Cynthia Aberdeen said that Barnes exhibited “the spirit of Bermuda.”

Caregiver Russ Ford recounted Barnes’s final days and the dedication of those who tended to him — above all his wife, who had always wanted to be a nurse.

Awakening Belvina Barnes at 2:45 a.m. on his last day, Ford held hands with her and prayed. Johnny Barnes, though unresponsive, moved his lips in words of love, and took his last breath at 5:51 a.m.

Ford brought the audience to their feet with the words: “If anyone is deserving of national hero status, it is John James Barnes.”

Pastor Kenneth Manders drew laughter and applause by suggesting that East Broadway be changed to Johnny Barnes Way. After the service, a procession of cars made their way to the St. George’s Seventh-day Adventist Church cemetery.

Among the crowd gathered in cheery tribute at Barnes’s Crow Lane roundabout was his fellow churchgoer, Angela Bean.

“Johnny shared love and joy every day. He was an example, and I want to do this in his honor,” said Bean, while waving at passing cars.

Barnes was buried mid-afternoon in a plot overlooking the ocean, with a crowd of about 70 people looking on.

Attendees sang hymns including “What a Friend We Have in Jesus” and listened to a Bible reading from First Thessalonians, while red rose petals were scattered on Barnes’ casket.

“Johnny was a national icon, but he was a very humble man. He showed every good characteristic that a Christian should exhibit,” said Stefan Burton-Schnuell, a former pastor at the St George’s Seventh-day Adventist Church, who flew back to Bermuda from the U.S. state of New Jersey to attend the service.

“Every time I visited Johnny’s house, he would tell me that he loved his wife,” said Sydney Gibbons, pastor of the Hamilton Seventh-day Adventist Church. “His message was very simple and doesn’t change. It’s about inclusiveness and accepting people.”

A long standing figure on the island of Bermuda, Barnes was known for greeting residents and visitors with a warm "I Love You!"

For more than 50 years, he was a daily fixture at a roundabout in the middle of the island, sitting on a bench and waving to all who passed. Visitors came from around the world to meet the man who felt called to share a message of love with everyone, every day.

Barnes played a key role in helping make the Seventh-day Adventist Church a fixture on the small island located in the middle of the Atlantic Ocean. A statue of Barnes in his familiar waving pose was raised by local business owners to honor his role in spreading the image of a warm and friendly culture with visitors from all over the world.

Ninety-three years of age, Barnes recently had to stop his daily greetings because of failing health. He passed away early on the morning of July 9 from natural causes.

In 2015, the North American Division featured Barnes in its NAD Division Report below:

The story of Johnny Barnes. (NAD)