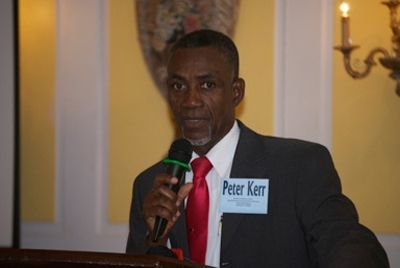 The Atlantic Caribbean Union Mission, one of
the newest unions of the Inter-American Division, is only three years old
(organized November 29, 2010), and consists of Adventist membership in three
countries: The Bahamas, The Cayman Islands, and the Turks & Caicos Islands.

About 30 treasury workers from schools,
conferences, missions; along with union administrators and staff, gathered for the
two-day event. The group sought ways to
improve transparency and accountability, and to prevent fraud in local churches
and other institutions.

Douglas reminded the church leaders that today’s
generation of lay members is much different from those of previous generations.
"In the past, members returned tithes and asked no questions. Now in this
generation, yes members are still giving but are requiring accountability, and
it is the workers’ responsibility to always be transparent and accountable.
Administrators are to always protect the church by preventing abuses.” He added
that "It is always important to remember that God is our CEO."

Kimberley Byran, an accountant with the South
Bahamas Conference, observed that the sessions were informative, interactive,
and enlightening. "I understand more clearly and I am better able to carry
out my responsibility in such a key area in the church,” she remarked.