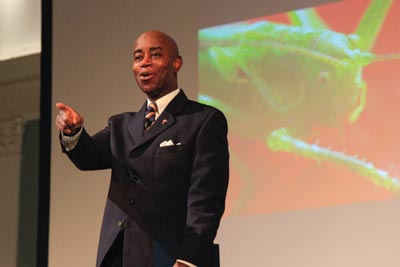 The most compelling evidence of God’s creative power is a transformed life.

It might not be a scientific argument, but as United States Senate chaplain Barry Black said, it was enough to move his 10-year-old heart to accept Jesus, and enough to sustain his faith for decades.

“I’ve come to tell you that God is still creating anew,” Black told a packed auditorium at Seventh-day Adventist world church headquarters on November 16, 2013. “And I challenge you, as you celebrate what He did during Creation week, to prepare to celebrate what He wants to do in the here and now.”Black’s keynote address was part of “Creation: The Earth Is a Witness,” a community outreach event held over a mid-November weekend at the Seventh-day Adventist Church’s General Conference headquarters in Silver Spring, Maryland.

The event promoted the biblical account of origins with a series of evening lectures for adults and daytime workshops for school-age children led by Guide magazine nature columnist Rich Aguilera. His presentations brought the biblical flood story to life, complete with piped-in thunder, lightning projected on a screen, and artificial rain.

Both kids and their parents watched a new version of the movie Creation: The Earth Is a Witness set to live orchestral accompaniment. The film is a day-by-day account of the Creation week illustrated with footage that Adventist filmmaker Henry Stober spent five years collecting worldwide. It begins with darkness before God created light and ends with Moses, the author of the Genesis account of creation, and his son worshipping God on the seventh-day Sabbath.

Black, whose keynote followed the half-hour movie, commented on its impact: “If you have not had a sense of the transcendent, as this beautiful orchestra has played and you have seen the splendor of the Creation, I want you to know that I have a Ph.D. in psychology. See me for counseling after this is over,” he said, eliciting laughter from the audience.

The retired admiral of the U.S. Navy Chaplain Corps—the first Seventh-day Adventist and the first African American to hold the position—said his own testimony is proof of God’s ongoing creation.

Black grew up in a rough Baltimore, Maryland, neighborhood, where he narrowly escaped a life of crime thanks to a mother “who planted the Word of God in my heart.” At age 10 he accepted Jesus. Three years later when friends asked if he would help them confront another teenager, he recited Scripture and refused. Those friends were charged with murder and sentenced to life in prison.

“So I literally owe my life to the power of the Word of God and His Holy Spirit who is still creating in the twenty-first century,” Black said.