If your eye doctor told you that you need delicate surgery to keep your vision, would you trust an 84-year-old eye surgeon to operate? Chances are that you would think it twice. That is, unless you meet Howard Gimbel—Seventh-day Adventist ophthalmologist, university professor, senior editor, international speaker, amateur musician, and recent appointee to the highly coveted Order of Canada.

“The tires aren’t worn out yet.”

Gimbel, who turned 84 last month, is still working full time, operating on around 20 patients a day at his Gimbel Eye Clinic in Calgary, Alberta, Canada. And the world-renowned doctor has no plans to retire.

“The tires aren’t worn out yet,” he recently joked in an interview by CBC News in Calgary. “I don't feel like I want to retire because I don’t anticipate I could have the joys that I have in practice doing anything else.”

In 1974, Gimbel pioneered and developed innovative methods that changed cataract surgery dramatically in Canada and around the world.

“When I was in training, we had patients stay in the hospital for a week,” he shared during the CBC interview. “They were bed-ridden, and they had risks of pulmonary embolism and others. Now, not even having to change clothes to have the surgery, it's more like going to the dentist.”

Back to Calgary, he opened a clinic where he soon made the most of his fascination with emergent technologies. In 1974, he became the first Canadian surgeon to use an ultrasonic probe to remove cataracts, according to the clinic’s website. When he combined this technique with the new intraocular lens implants, the demand for the surgery grew exponentially, since the procedure did not require hospitalization.

“Gimbel and his staff were able to provide a pleasant and reassuring surgical experience,” reads the clinic website. “Invasive tests and procedures, hospital gowns, and unnecessary medications were eliminated.”

The success of the new methods encouraged Gimbel to continue developing new techniques, including the co-invention of the continuous curvilinear capsulorhexis (CCC), which eventually became a world standard and is still used in cataract surgery.

“God gave me the courage to innovate,” he said in a recent phone interview with Adventist Review when describing the reason for his successful career. “After all, the Lord desires that we become a blessing to others.”

Gimbel acknowledged that many of his great achievements would never have been possible but for the support he received from various people throughout his long career. A grandson of an evangelist, he said he also felt inspired by his Christian teachers and professors. “[In my education] I had inspirational role models,” he said.

As a way of giving back, Gimbel still flies once a month to Loma Linda University, where he teaches, operates, and trains a future generation of eye surgeons.

But perhaps no one was so instrumental in his success as his wife of 61 years Judy Carl, whom he met in Walla Walla and married on the evening of his graduation day. Gimbel is fast to acknowledge the role Judy has had in his personal and professional life.

“After the new method [of cataract surgery] became extremely successful, my practice exploded,” he said. “People began to travel to Calgary from all over to get their eye surgery at my clinic. I couldn’t keep up.”

Since their kids had already left for boarding school, he invited Judy to work with him, and she accepted. “She became the administrator, managing the whole clinic operation, and she has stuck with me since then.”

“The Lord gave us the compulsion that we had to share,”

Judy also became instrumental in implementing a training program for the technical staff, and eventually her husband’s conferences and lectures for other eye surgeons.

“The Lord gave us the compulsion that we had to share,” he told Adventist Review. As other surgeons were traveling from around the world to see him operating, Judy organized professional events in Calgary and nearby resort town Banff, where Gimbel was able to teach others what he had learned along the way.

“Judy’s assistance and support have been a real blessing,” he said. Together, they had five children and now enjoy their thirteen grandchildren.

As the son of a piano teacher mother and a father that loved singing in church, Gimbel’s first memories are surrounded by music. As a young man, he learned to play the musical saw and the trombone, and began to sing in various quartets and musical ensembles at his local church. “In high school, some friends and I formed a quartet, and when I got to Walla Walla, I sang again in a quartet,” he said. He still loves listening to classical music and singing in choral groups.

Throughout his career, Gimbel has been the recipient of dozens of awards, including the Alberta Order of Excellence in 1992, and the Premier Surgeon PS250 in 2010. The American Society of Cataract and Refractive Surgery has listed him as one of the “25 Most Influential Ophthalmologists of the 20th Century.”

Recently, he crowned his multiples prizes with the official announcement that he had been appointed to the Order of Canada. The highly coveted award from the Governor General of Canada, which he expects to receive in an official ceremony later this year, recognizes the outstanding merit or distinguished service of Canadians who have made a major difference through lifelong contributions in every field.

Gimbel has co-authored two best-selling textbooks and numerous book chapters. He is a frequent contributor to medical journals and is in high demand as a speaker. Because he cannot accept every invitation, he has produced numerous surgery training videos and beamed live surgery via satellite from his clinic to more than 25 major conferences around the world, according to his clinic website. He has also been an honored guest speaker at many universities, including Harvard, Johns Hopkins, UCLA, and the Mayo and Cleveland Clinics.

Despite his successful career, Gimbel’s bigger joys are found in simpler things. He still visits the family’s 1,750-acre farm whenever he finds the time and strives to keep active in body and mind. “Now I am learning Spanish!” he shared excitedly with Adventist Review.

But for all his achievements, for Gimbel, the best vision is God’s vision, and his greatest joy is to know that he has followed God’s leading for his life.

“I never imagined this life and this career,” he said, “but remember it’s amazing what God can have in store for you even when you don’t know it.” 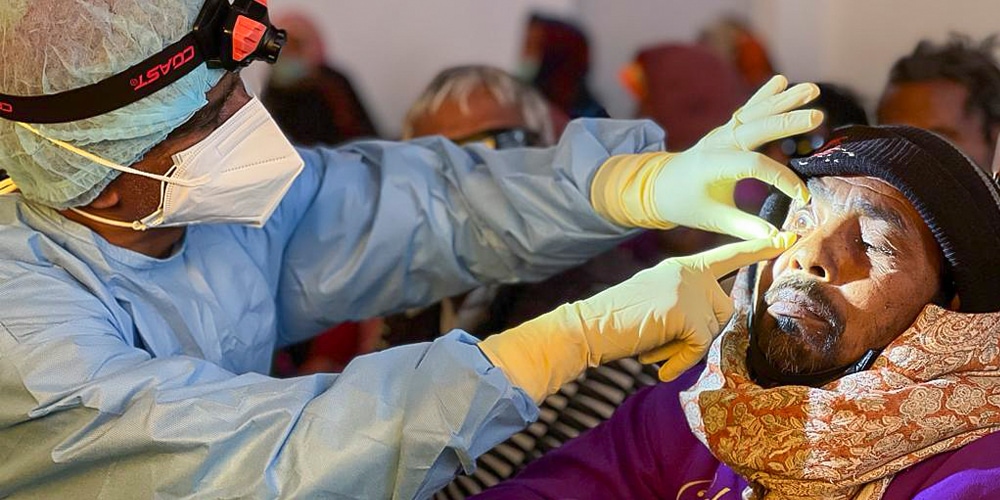