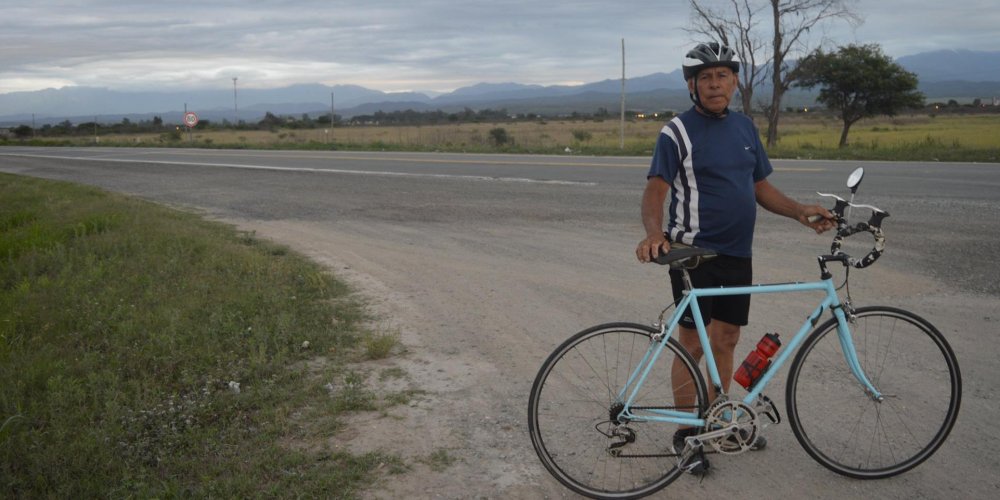 How far would you go to build a Seventh-day Adventist school?

A 68-year-old grandfather has embarked on a 3,700-mile (6,000-kilometer) bicycle ride across Argentina to raise funds for an elementary school.

“I have no way of contributing financially, but I know how to ride a bike,” said Ramón Verón, a wiry elder at the Adventist church in Escobar, a city of about 50,000 people located 20 miles (30 kilometers) from Buenos Aires.

Verón, a father of four and grandfather of five, set off on the two-month trek with his youngest daughter, Florencia, 22, on Nov. 8. He is pedaling his 18-year-old racing bike from La Quiaca on Argentina’s northern border with Bolivia to Ushuaia on the southern tip of the continent.

A total of US$400,000 is needed to open the school, a project that has been on the drawing board for 10 years, on the designated site near the Temaikén theme park.

“The land is there,” said Diego Varrenti, pastor of the Escobar church.

The enthusiasm is also there. Verón’s bike ride, called “All for a School,” has ignited the spirits of local church members. The trek has its own
website, Facebook page where the journey can be tracked, and Twitter account where the hashtag #laescueladeDonRamon can be used to support the initiative.

“Everybody is motivated,” said Raúl Medina, a local church member.

Many church members have started to give a second tithe, an extra 10 percent of their income, for the school project. Not only do they want a church school, but they also realize there is a real need with a large number of children living in the area, Medina said.

“We need to start the work,” he said.

The Adventist Church’s South American Division, whose territory includes Argentina and seven other countries, has 898 schools and colleges with 20,221 teachers and 312,544 students.

Long-distance biking is nothing new for Verón. At 14, he rode 100 kilometers from his birthplace in the town of Villa Guillermina to the city of Resistencia. Then he pedaled his way to Buenos Aires, Bahía Blanca, and Salta. Ever since, he has gone on an extended tour every three or four years.

“But this is not just another initiative,” Verón said of his latest quest. “Since I was 4 I have wanted to go between La Quiaca and Ushuaia, but I wanted to do it for a special reason.”

Adventist education played a role in the decision of his biking partner, daughter Florencia, to join him on the road. Florencia graduated from River Plate Adventist University and went as a missionary to Uruguay. Upon her return to Argentina, she decided to go with her father on the trip.

“My parents have drilled in me since I was little that helping others is the most important thing,” she said. “That was passed on to me in college, too. It opened my mind to see that others are first.”

Her father said that was the kind of attitude that young people needed to have to make good families and improve their neighborhoods and country.

A few days before the bike rides started, a reporter from the Argentine newspaper El Clarín asked Verón whether he would be able to collect the necessary funds.

“It is always a risk,” he replied. “But when God is with us, He helps us, even if we are struggling and especially when we are thinking of others.”

He flirted with the idea of buying a newer bicycle for the adventure but then decided that the money would be better spent elsewhere.

“It is old alright, but it rides just fine,” he said with a smile.

Verón, meanwhile, hopes to complete the ride in early January and see the school open by 2017.

“We have faith that the school will be already open in 2017,” he said.

His dreams do not end with the school. He is already thinking about the need for a high school.

“Later on we will do something else for a high school because God has no limits,” he said.

Voices
January-born Reflections
A combination of contributions designed for intellectual satisfaction.
Profile
Media Ministry Is Transforming Lives in Fiji
Despite lockdowns and restrictions, more than 600 have been baptized in 2021.
Commentary
Adventists’ Passion for Service Is a Force to Be Reckoned With
At the AMEN conference, attendees give away snapshots of their commitment to service.