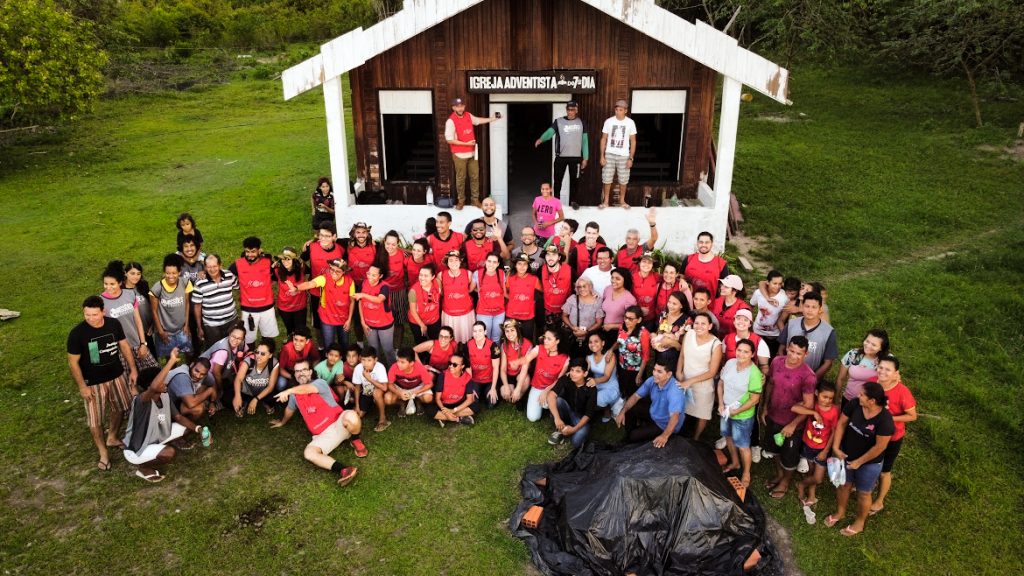 Have you ever imagined traveling more than 2,500 miles (4,000 km), staying on a boat, and working every day as a volunteer? It seems hard to imagine a group of young people who decide to give their vacation time for a common goal: to serve others.

But that is precisely what happened with a group of students from Brazil Adventist University (UNASP), who participated in the Amazon Lifeguard project, an initiative promoted by the Northwest Missions Institute (IMN) in partnership with the Volunteering and Mission Center.

In late June 2022, after arriving in Manaus, capital of the state of Amazonas, about 35 people got into a mission boat and headed toward the Nova Jerusalém community. Their first challenge was to travel by boat for 24 hours on the Amazon River until they reached their place of service.

Accounting student Vitor Nunes, 20, said he could not have imagined the experience he was about to have. “When we left our school, I felt nervous,” Nunes said. “I had created three pictures in my mind: first about the volunteer team, second about the place of service, and third about the spiritual component of the initiative. But I must say I was wrong in all of them. My expectations were surpassed by far.”

According to IMN director Ronivon Santos, the partnership with the school is now seven years old. It seeks to motivate young university students to engage in mission and participate in initiatives aimed at supporting riverside and indigenous communities in some of the most hard-to-reach places across the region.

Adapting to a Challenging Place

The mission initiative in Amazonas, known for its tropical climate, high humidity, and temperatures above 100°F (38°C), involved the harsh process of adapting to a challenging place.

“For ten days, volunteers lived on the boat, where they ate and even slept in hammocks,” IMN journalist Thalita Beatriz reported. “Their routine had been carefully devised, with various rotating activities that provided them with a wide range of opportunities of learning and applying their knowledge.”

Initially, activities focused on finishing a laundry room for collective use, providing music classes, and setting up a school’s vegetable garden and orchard. Students also worked on improving the existing pier, adding eight more air barrels underneath to make it safer.

“In addition to what was planned, we did some things that were not initially planned, like providing medical and psychological care for the residents, vocational lectures, and inventory of items and expanding the coverage of the flour storage depot,” Rolf Maier, who led the trip, shared.

The benefits of what was accomplished reached not only the families in the community but also the volunteers themselves. “For some time, I had been looking for some answers from God, without getting them,” Nunes said. “But in the mission field, I really learned to listen to God.”

According to the team leaders, the plan for the next groups that will visit is to improve the community water and power systems. They are planning to implement a waste and water treatment system, install a solar power system, and increase the production of the vegetable garden, introducing native fruit species such as cupuaçu and açaí.

A Renewed Sense of Service

“Being in mission always helps you to become part of a new family,” Maier said. “It is just natural, since participants live and share every day in close quarters. For most of them, it is a unique experience, in which they learn about what is really important in life, namely, to serve others and not yourself. I can really see how participants change between the beginning and end of a project. They certainly change for the better.”

Project participants leave with a sense that life is not worthy to be lived if it’s not lived to serve others, organizers said. And they find it hard to say goodbye.

“I didn’t want to leave the community,” Nunes said. “I became really attached to them.”

But, Nunes emphasized, he left with a new sense of purpose. “Through this project, I learned that at the end of the day, what matters is how I spend my life serving others. If Jesus left heaven to serve, who am I to act differently?”