All Hands on Deck to Reach the Cities 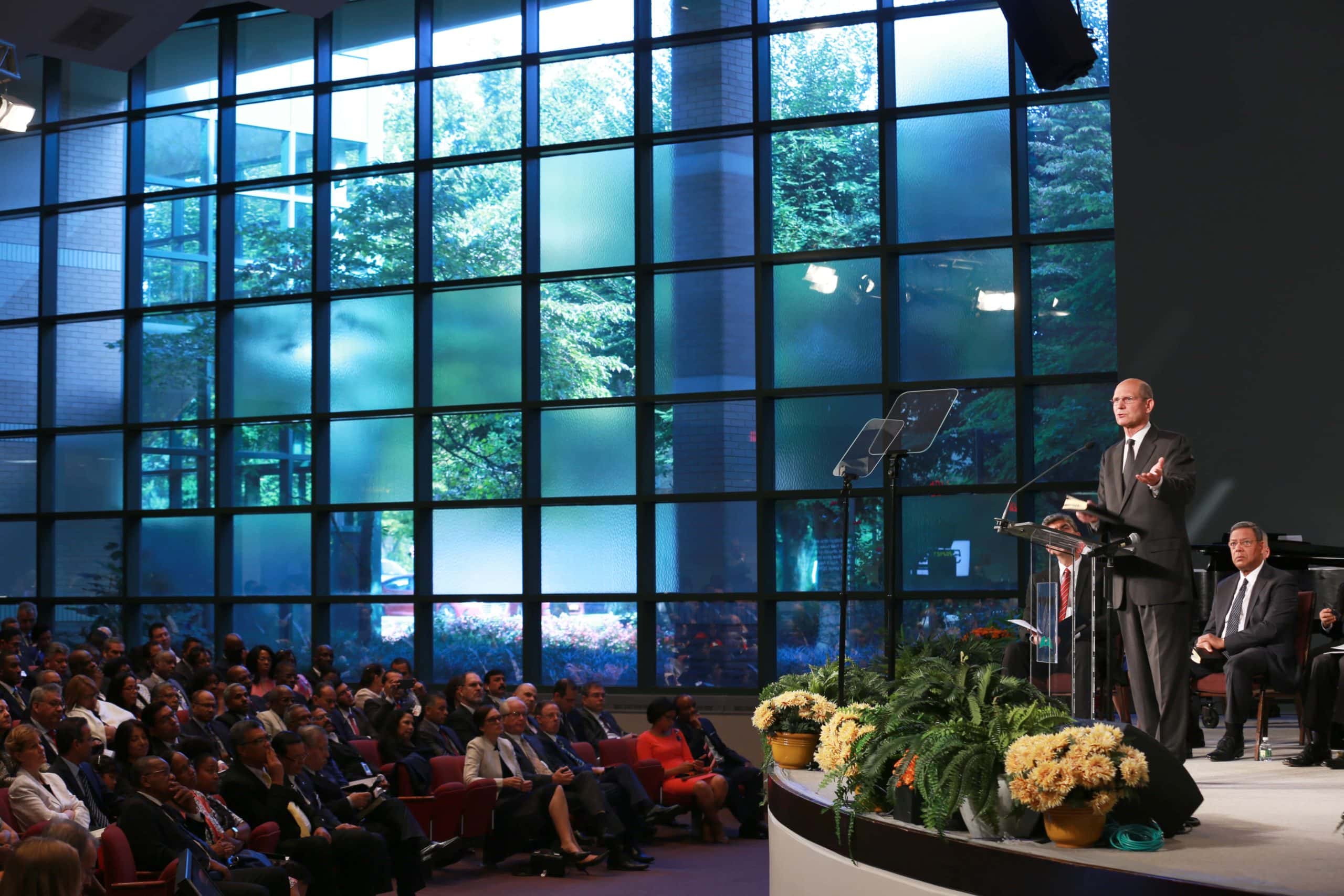 God’s plan and longing desire is for His followers to go into all the cities to teach, preach, and heal in His name, said Seventh-day Adventist church president Ted N.C. Wilson. His remarks were part of his annual Sabbath address to the members of the world church’s Executive Committee, during the worship service at the denomination’s headquarters in Silver Spring, Maryland, United States, on Oct. 7.

Based on the Bible story of the prophet Jonah, whom God called to evangelize the populous ancient city of Nineveh, Wilson called on every member to consider focusing every effort to reach the large urban centers of the world.

“Christ’s laborers are still few in the large cities of the world,” said Wilson. “God is pleading with us to reach these massive secular fortresses with the life-giving message of the Gospel.”

Building on Jonah’s analogy, Wilson said that while many members have taken seriously God’s call to reach the cities, many have “sailed to Tarshish instead.” Tarshish is the faraway city Jonah sailed to in order to run away from God’s call. “Have we given lip service and only superficial attention to the great task of reaching millions in the metropolitan centers of the world?” Wilson asked. “Have we truly challenged our members to reach out to others?”

As we follow God’s command to reach the cities, we should avoid applying human ideas and adopt heavenly-inspired methods instead, said Wilson. Those methods have been clearly stated, he said, in the written messages of church cofounder Ellen White, which Seventh-day Adventists believe to be inspired.

Wilson explained that it is a practical approach that strives to portray Christ’s character to others, and that includes dozens of possibilities. Among others, he mentioned youth-driven community initiatives, health clinics, vegetarian restaurants, integrated media and social media evangelism, counseling centers, and personal witnessing with family and friends.

“These are the profound concepts from heaven [to work] the large metropolitan centers of the world,” Wilson said.

Moving past theoretical definitions, however, Wilson invited several church leaders to share how they are applying some of these methods in cities around the world. The focus was on what have been called “centers of influence,” or places where by implementing a practical Christian ministry or initiative, the church is able to make inroads and share the Gospel with local residents.

Leaders who approached the podium to share what they or those under their leadership are doing included Teenie Finley, who together with her husband Mark developed a novel center in the US state of Virginia. In it, they offer training to pastors and lay members, as well as engaging activities for all the community to attend.

Their “Living Hope Center” includes a church meeting space for 270 people, a media center, a school of evangelism, and a community health center. The center’s health programs—on natural cooking, stress management, and health expo—and their archeology, prophecy, and doctrinal seminars are attracting hundreds of people from surrounding communities.

“It is our desire to follow Christ’s method and to give the rest of our lives in training others in Christ’s selfless ministry,” concluded Finley.

Following Finley, Adventist Mission Office director Gary Krause shared what centers of influence in large cities are doing to address this burden for unreached urban areas around the world.

There are hundreds of centers of influence in the world today of different kinds, he said. But one thing they have in common is that they move out of the walls of the church into the community to mingle with people and show Jesus’ love in action.

Krause closed by retelling an experience from Argentina, where a woman who came to accept the Adventist message due to a center of influence said, “I wasn’t looking for anything but I found everything.”

Other leaders shared ongoing community initiatives in populous cities such as Hanoi, Vietnam, and Cairo, Egypt, where the church has pledged to make special efforts to show Jesus’ love in practical ways among millions who do not know Him.

Every Member and Ministry Involved

Wilson emphasized that reaching the big cities is a “massive work,” and one that cannot be accomplished only by paid pastors. “We need Total Member Involvement (TMI),” he said in a nod to a world church initiative that looks to get every member involved in mission.

“TMI has energized lay people in a marvelous way,” Wilson said. “In many [church regions], it has become a very motivating vision that has transformed churches into powerful soul winning agencies.”

Adopting a more personal tone, Wilson then appealed to every leader and member to get on board. “I am personally asking that all fields…emphasize this amazing TMI method,” he said. “Let us revitalize our church members in every area of church mission.”

According to Wilson, TMI is a process that includes Bible study and outreach, but also health and lifestyle reform, a wise use of financial means, well-ordered biblical families, and other life-enhancing changes.

“All of this is possible as we lean on Christ for our every need,” he said, as he invited TMI worldwide coordinator Duane McKey and his wife Kathy to share a major TMI and evangelistic initiative planned for Tokyo and other large Japanese cities in 2018.

McKey shared about past and ongoing TMI initiatives in Rwanda, Romania, Nepal, and the Philippines. In preparation for the 2018 TMI event in Japan, 48 Adventist Japanese pastors were invited to the Philippines to lead an evangelistic series. Their efforts resulted in 1,400 baptisms. Preparations are also in progress for a similar outreach in India in 2019.

Against these and other initiatives, Wilson reaffirmed that TMI calls for involvement in every area of church activity. “[We must] use everyone, women, men, young adults, including children in reaching out to the people of the great cities,” he said, as he introduced world church director of Children’s Ministries Linda Koh, inviting her to share what children are doing to share God’s love in cities around the world.

“How to reach millions of children in the cities?” asked Koh, before sharing some of the programs that are working to the bring young children to Jesus, such as Vacation Bible Schools, health expos, sports day, music festivals, and others.

Koh explained that success is achieved when children come to love and accept Jesus. “As the many children who come to us and tell us, ‘Jesus is now my friend forever,’” she said.

A comprehensive health ministry is also vital for TMI, said Wilson. Adventists pastors and health professionals can work together. By way of example, he called world church Health Ministries director Peter Landless to provide examples about how health initiatives are supporting the mission of the church in big cities.

“Comprehensive Health Ministry believes every member is a medical missionary,” said Landless, before reporting the success of initiatives such as mega and small health expos, tobacco cessation and addiction recovery programs, fun walks and runs, and cooking schools. He highlighted the 600 million US dollars in charity healthcare provided around the world each year, and the 50 million health-related books distributed.

“We can be part of this if we believe the [health] message, live the message, and teach the message,” Landless said, before concluding, “From the heart transplant to the simple loaf of bread, there may be more religion there than in many sermons.”

At Wilson’s request, Global Mission Urban Center director Doug Venn made a heartfelt appeal for members to get actively involved in sharing God’s message in the cities.

“We need to be convicted and recommitted to reaching the cities,” said Venn, who called on church leaders to be “rebaptized” together with him “for the Mission to the Cities priority.”

Wilson closed his message by making yet another plea to give the evangelistic work in the cities all the attention it deserves. “Please take the ‘Mission to the Cities’ challenge seriously, and submit it to God in prayer for your planning in every city around the world,” he said. “The time to work our cities is now!”

To read a transcript of Wilson’s message, click here.