Adventists ‘Shake Africa for Christ’ With 2,309 Baptisms in Indian Ocean 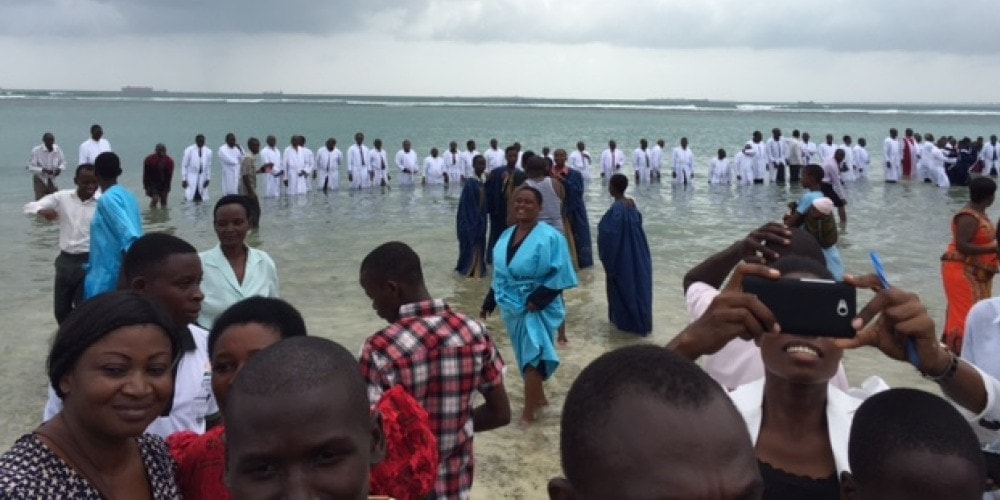 Thousands of people have been baptized across East Africa, including 2,309 in a mass baptism in the Indian Ocean, as Adventist Church leader Ted N.C. Wilson wrapped up a major evangelistic series with a call for church members “to shake Africa for Christ.”

The baptisms, held on Sabbath, Feb. 7, capped three weeks of evangelistic meetings at scores of sites, including about 100 in Tanzania’s capital, Dar es Salaam.

To celebrate, 40,000 people from the 11 countries of the Adventist Church’s East-Central Africa Division packed a stadium in Dar es Salaam for a grand finale under the banner “Mission Extravaganza.” Two hundred buses from Kenya alone brought church members to the event.

It was not immediately clear how many people were baptized across the division, which made extensive use of television and radio in its Jan. 10-31 evangelistic campaign. Geoffrey Mbwana, a general vice president of the General Conference and a native of Tanzania, led major meetings that were broadcast on television.

Wilson, who is on a seven-country tour and met with the president and other senior government officials in Tanzania, expressed awe at the mass baptism early Sabbath morning.

“A beautiful sight! A wonderful blessing from God!” he said by e-mail.

The newly baptized members headed straight from the beach to the National Stadium for worship services.

Wilson, who took the platform to preach at 1:45 p.m., urged the audience to share the news of Jesus’ soon coming in their own communities.

“God calls you to shake Africa for Christ!” Wilson said. “Be in connection and communion with Him every day, being revived and reformed in Him every moment of your life.”

Many of the 40,000 attendees accepted the challenge, and they divided into small groups at the end of the sermon to pray for the Holy Spirit’s power to proclaim the Advent message back at home.

Later, Wilson was joined on the stage by Foreign Minister Bernard Membe and Agriculture Minister Stephen Wasira, who is an Adventist.

Membe, who gave strong affirmation to the Adventist Church in his speech, tweeted two photos of himself on the stage and wrote that he had felt “humbled” to address the crowd.

President Jakaya Kikwete welcomed Wilson and an Adventist delegation to his official residence, the State House, for an evening meal and talks that lasted until about 10:30 p.m.

Wilson, who called the meeting “very helpful,” noted that Kikwete has been instrumental in preserving peace in Tanzania and helping to resolve conflicts in Cote d’Ivoire, Burundi, and Kenya.

“He is very knowledgeable about the Seventh-day Adventist Church and very complimentary,” Wilson said.

Wilson — who arrived from India on Thursday and left on Sunday for South Sudan — was met at a VIP terminal at the Tanzanian airport by church and government officials. Pathfinder and Adventist Youth marching teams put on a welcome show.

From the airport, Wilson attended the inauguration of the new headquarters of the recently formed Southern Tanzania Union Mission.

The Mission Extravaganza event officially opened on Friday at the National Stadium with a parade of thousands of people, including Pathfinders, Women’s Ministries members, health workers, pastors, and literature evangelists.

The guest of honor, Tanzania’s vice president, Mohammed Gharib Bilal, told the gathering that the government would guarantee the right to worship but people must also respect one another’s right to worship.

“The doors are open, so we may consult and encourage one another,” he said, according to Tanzania’s The Guardian newspaper.

In conversations with Adventist leaders, the vice president and other government representatives voiced amazement with Mission Extravaganza, saying they had never attended a meeting where people showed such respect and good decorum.

The event was a “great witness for the Adventist message and Christ’s power to bring order to our lives through the Holy Spirit,” Wilson said.

News
A Tale of 2 Tires 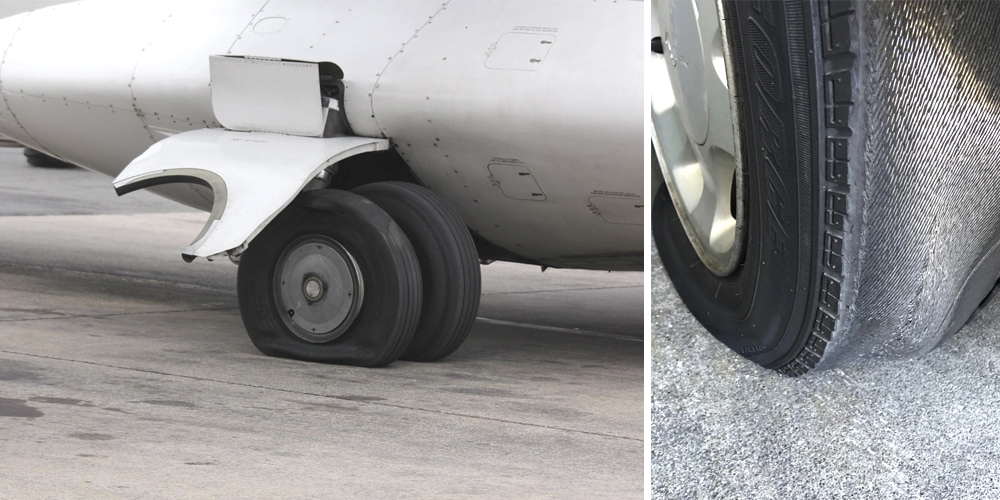 News
50 Years and Counting in Tanzania 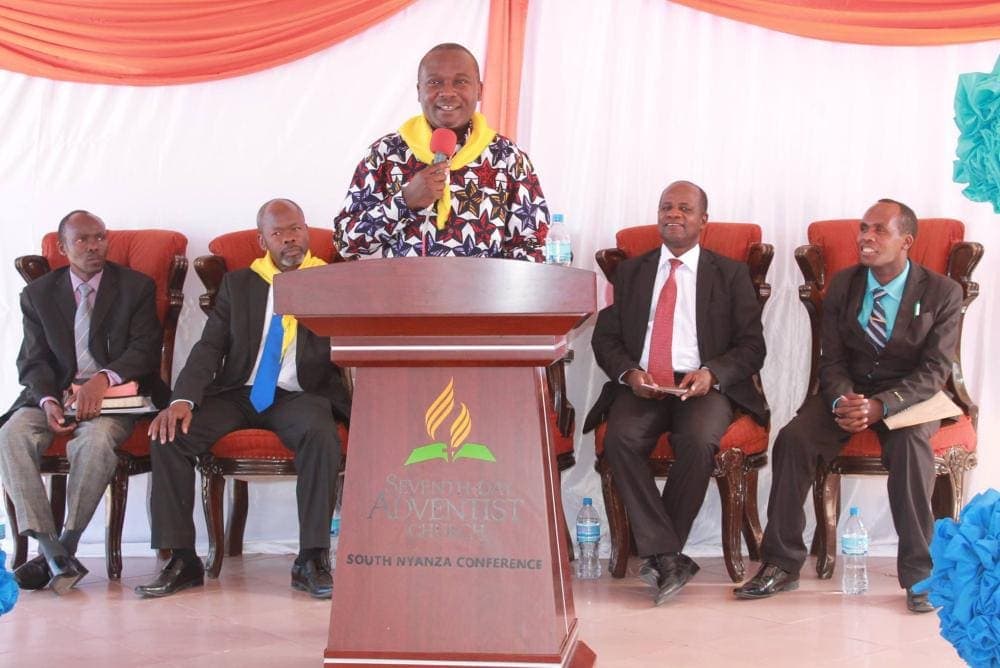 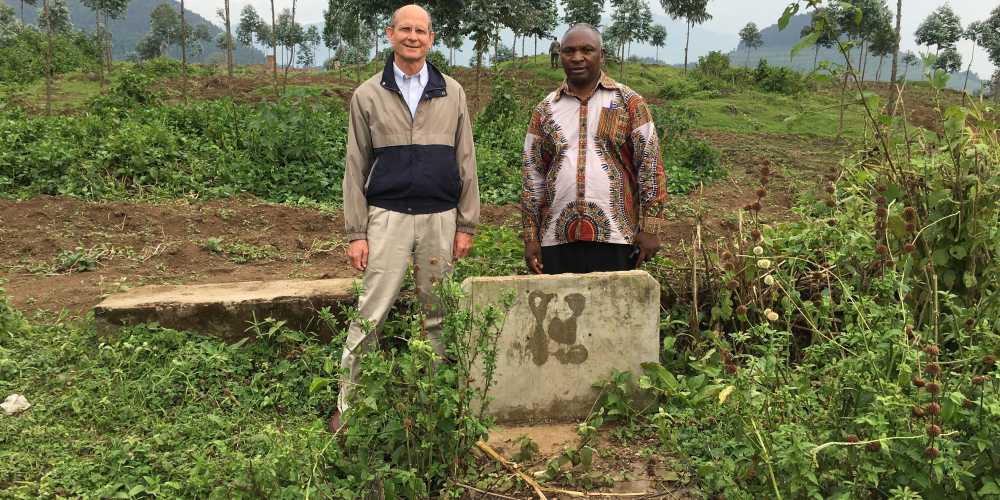