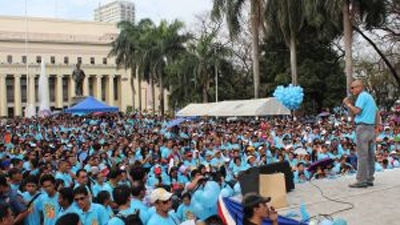 Almost 20,000
Seventh-day Adventists rallied at Liwasang Bonifacio in Manila, Philippines,
February 22, 2014, to celebrate the completion of a month-long community
service event in the region called Love-in-Action,
sponsored by the Central Luzon Conference. High-ranking government officials as
well as Adventist Church leaders from the conference, the North Philippines
Union, and the Southern Asia-Pacific Division attended.

On the previous
three consecutive Sundays, the Central Luzon Conference of the Seventh-day
Adventist Church in the Philippines conducted simultaneous community service
projects, including a cleanup drive, child guidance and feeding programs, and
medical/dental missions to help the government provide for basic community
needs for residents. The program reached some 100,000 people in 500 barangays,
or neighborhoods. The rally conceptualized the church’s mission to care for the
environment and its inhabitants by conveying God’s love through acts of
kindness and service. Conference president Romeo T. Mangiliman along with
Manila mayor and former Philippine president Joseph Ejército Estrada welcomed the crowd.

Local church
members and leaders promoted the event by distributing more than 1 million
tracts to those living in the region.

Love-in-Action originated
with the Integrated Evangelism Lifestyle program, an evangelism tool for Hope
Manila 2014:iCare. It exemplified the gospel message in the lives of Seventh-day
Adventist Filipinos in preparation for a two-week evangelistic campaign
scheduled for May at the Philippine International Convention Center in Manila.
General Conference president Ted Wilson will be the speaker for the series of
meetings.

Gonzales congratulated the
church for “choosing to give life to its message and remaining united with a
mission to serve the least of its brothers.”