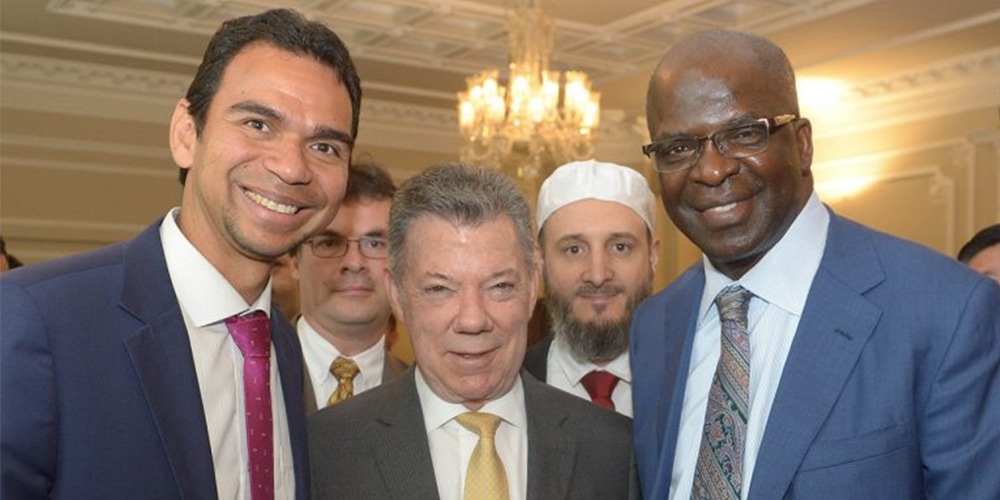 Seventh-day Adventist religious liberty leaders were invited by the Colombian government to help celebrate the country’s third annual National Religious Freedom Day, held July 4, 2018. During a morning meeting at Casa La Giralda, headquarters of Colombia’s Ministry of the Interior, Ganoune Diop, director of Public Affairs and Religious Liberty for the Adventist world church, addressed more than 100 religious and political leaders who had gathered to mark the occasion.

“You have the opportunity to make a historic contribution to peace by recognizing human dignity as the essential foundation for building a peaceful coexistence,” Diop told the group, which included Evangelicals, Protestants, Catholics, Muslims, Jews, Buddhists, and representatives of other faiths.

In his presentation, Diop acknowledged that Colombia faces extraordinary challenges following more than five decades of armed civil conflict—a devastating struggle that through the years has displaced some 5 million people from their homes, left an estimated 220,000 dead, and taken a massive economic and emotional toll on generations of Colombians.

Diop said that people of faith in Colombia now have a critical role to play in the peace and reconciliation process, which has been underway since the 2016 cease-fire agreement between the government and rebel groups. He challenged his listeners to help forge a society that recognizes each human life as sacred, with a God-given worth greater than that of temples, churches, mosques, or religious texts.

“Only this,” said Diop, “can provide a sure foundation for an inclusive and harmonious future in Colombia.”

Earlier in the day, Diop, along with Gabriel Villarreal, Public Affairs and Religious Liberty director for the Adventist Church in Colombia, attended a breakfast event for religious leaders at the presidential palace, Palacio de Nariño, hosted by Colombian president Juan Manuel Santos. Santos, who received the Nobel Peace Prize in 2016 for his efforts in ending Colombia’s civil conflict, has also been a key supporter of religious freedom.

Diop and Villarreal spoke with Santos, thanking him for his continuing support for religious minorities, which includes signing the 2016 decree that recognized July 4 as National Religious Freedom Day. In the decade leading up to this landmark decree, Adventists in Colombia had helped build a broad coalition of religious leaders dedicated to promoting the principle of religious liberty.

In the afternoon of July 4, Diop was also the keynote speaker at an international symposium hosted by Colombia’s Ministry of the Interior and the mayor of Colombia’s capital, Bogotá. More than 200 people attended this event, which explored the contribution of inter-religious cooperation to social development.

Reflecting on the day’s events, Villarreal said he was encouraged by the level of support for religious freedom shown by the Colombian government. “The Seventh-day Adventist Church in Colombia will continue working with religious leaders from different denominations, political leaders, and government entities to make sure that the right of religious freedom is respected for everyone, everywhere, and anytime," he said.

Gabriel Villarreal contributed to the reporting for this article.