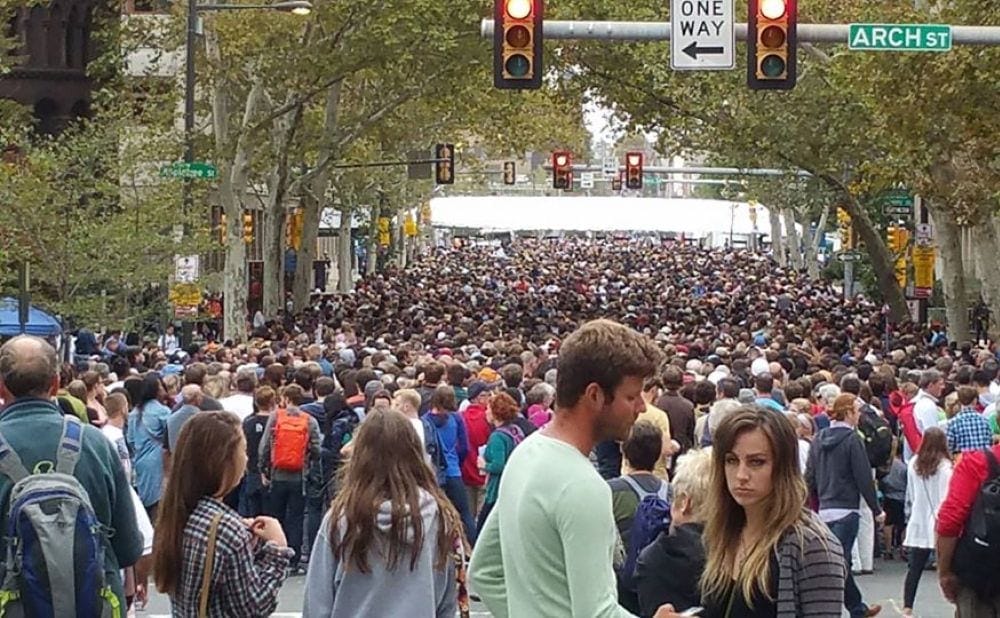 A small team of Seventh-day Adventist volunteers met its goal Sunday of distributing 1 million tracts with titles like “Hope for Families” and “Sabbath” to scores of people packing Philadelphia for a weekend visit by the pope.

The volunteers — a mix of people from Philadelphia itself and as far away as Hawaii — passed out GLOW tracts for the past 10 days as part of an initiative that they said has been blessed by God amid indications of a struggle between good and evil.

The outreach effort wrapped up Sunday night as Pope Francis ended a historic, six-day visit to the United States with an evening mass in the city.

“We have met so many good people who have thanked us and prayed with us,” Martha Vang, a volunteer from California, told the Adventist Review. “It’s amazing to see God soften people’s hearts.”

A team of 30 to 45 volunteers distributed tracts daily on streets, at homes, and on parked cars in parking lots, said Nelson Ernst, director of the GLOW ministry, which is part of the Adventist Church’s Pacific Union Conference, the organizer and funder of the initiative.

“We’ve had cops coming up to us in the poorer neighborhoods, saying, ‘We know what you are doing and want to thank you and let you know that we are protecting you,” Ernst said.

Volunteer Tijan Oloa said her own life was changing after she started sharing her experience passing out tracts with her husband of 11 years, a Sunday-keeping Christian back at their home in Sacramento, California, who hadn’t shown interest previously in studying the Bible.

“He has started researching the Bible for himself to understand what is happening at this time in Earth’s history,” Oloa said.

Her husband’s interest in the Bible was sparked by two incidents that occurred on the first full day of the outreach initiative, Sabbath, Sept. 19.

Oloa spent much of the afternoon tucking GLOW tracts into car handles and under windshield wipers in parking lots. Near the end of the day, a man came running toward a GLOW van that had just picked her up, Oloa said. He pounded on the van’s door and screamed, “What are you guys doing? What are you guys doing?” He then managed to open the van’s sliding back door and, pointing directly at Oloa in the backseat, roared, “Who is this woman?”

The stunned volunteers sat speechless in the van.

“Our driver just sped off to get us out of that situation,” Oloa said.

But another surprise awaited the volunteers when they arrived at the next parking lot to pick up another volunteer.

This volunteer told how a man had just run up to her to ask if she had put a tract on his car. She replied that she hadn’t but it had been placed there by one of her partners during an earlier sweep of the parking lot a couple hours earlier. That partner was Oloa, and she had left a tract titled “Promise of Peace.”

“The man said GLOW had saved his life,” Oloa said. “He had told God that he would commit suicide that day and he saw GLOW as a sign from God that he shouldn’t.”

The man tried to press a $100 bill into the volunteer’s hand as a donation for GLOW ministry.

Oloa related the day’s happenings to her husband in a phone call that night.

“He was really taken back to realize that a fight is really going on between good and evil,” Oloa said. “You just don’t really see it unless you are aware of it.”

What makes the story even more amazing for Oloa is she hadn’t been sure whether to go to Philadelphia. She had worried about leaving her three children and her workplace for 10 days and about finding an affordable plane ticket. But she said the Holy Spirit kept convicting her to go as she prayed for a week, and everything fell into place after she applied to work as a volunteer.

“I thought that I was just coming to be a volunteer who passed out GLOW, but this has actually been a blessing to my whole family,” Oloa said. “The Lord is showing me that I didn’t chose to come here but that He wanted me to come here to make me a better person and to change my husband.”

The idea to distribute 1 million GLOW tracts came to Ernst, the ministry’s director, as he sat at home on a Friday evening several months ago.

“God kept bugging me that we needed to doing something because we knew the pope was coming,” he said.

He prayed and a barebones plan flashed into his mind. He rushed to his computer and jotted it down. When he finished, he thought, “Where will we get the money?” Immediately he remembered that he knew a millionaire in the area.

Before the weekend was over, Ernst had met with the millionaire and secured a pledge to pay the expenses of printing 1 million tracts at Pacific Press in Nampa, Idaho, and shipping them to Philadelphia. The total cost amounted to $30,000.

Eight different titles were printed: seven from the old lineup and a new title, “Hope for Families” about Jesus’ Second Coming, made especially for the pope’s family-focused visit to Philadelphia.

GYC, an Adventist supporting ministry comprised of young people eager to share the gospel, contributed with advertising and sent its director of evangelism to Philadelphia. A number of the volunteers have links to GYC.

“Many people are reflecting more on family and religion, and it’s only our duty — and in truth our great privilege — to share the truth of the Bible,” said GYC president Natasha Nebblett. “We only pray God uses the seeds planted and that it will bear a plentiful harvest for Him.”

The volunteers covered their own travel expenses to Philadelphia and paid a fee of $115 to $170 each for transportation expenses around the city. The church’s Allegheny East Conference, whose territory includes Philadelphia, provided the volunteers with lodging at Pine Forge Academy and breakfast at no cost.

Volunteer Martha Vang signed up hoping for a spiritual blessing for herself but unexpectedly found herself bringing a small army of seven friends and family members to Philadelphia.

Vang said she didn’t think that she could last the entire 10 days when she heard about it, so she booked a plane ticket in June that allowed her to fly home to California after six days.

But hours after she arrived back home, she learned that the team was facing challenges when she joined a call-in prayer session.

“The leader said during the phone call that one person was sick, people were getting tired, and they needed more laborers,” Vang said. “Something began tugging at my heart, saying, ‘You’ve got to go back and finish the work.”

She looked at plane tickets online and was surprised to find a round-trip ticket for a flight the next day that cost $301 — the same price that she had paid for the first ticket that she bought back in June. Several friends searched the available fares and could only find tickets starting at around $800.

“I said, ‘Lord are you trying to say something?’” Vang said.

Vang determined to fly back across the United States — but not alone. She persuaded two family members and five friends to join her.

“Not to brag but I kind of enlisted an army to come back over with me,” she said.

The extra volunteers have been much appreciated, other volunteers said.

Vang said she was glad that she returned.

“I have found that when you are not actually doing the Lord’s work, you become lukewarm,” she said. “You have to actively remind yourself that this is the work that you are supposed to do, the work that the Lord has put you on this Earth to do.”

Vang’s sister, Tara, was among those who flew with her back to Philadelphia.

When tens of thousands of people lined the streets to catch a glimpse of the pope on Sabbath, Sept. 26, she began to pray for God to send someone her way who could be blessed by a meaningful conversation.

“At that moment, someone came up to me,” Tara Vang said. “He told me that he had had a bad day, and I said, ‘Hey, here is something that will make you happy.”

She handed him a tract titled, “Secrets of Mental Health.”

The man looked at the small booklet with astonishment before exclaiming to Vang that he was bipolar and had tried to commit suicide three times.

“This is exactly what I need right now,” he said.

Vang said she was “ completely blown away.”

She pulled out a copy of The Great Controversy by Adventist Church cofounder Ellen G. White, telling the man that the book and the Bible had helped her get through periods of darkness.

The man took the book and promised to read it.

While the 10-day effort to share 1 million GLOW tracts ended Sunday night, Vang said she hoped that Adventists worldwide would seize this moment in Earth’s history to share the truth about Jesus’ soon coming.

“Every single missionary has had multiple divine appointments,” she said of the Philadelphia volunteers. “All we can say is God has been so good to us. God is with us, and He has gone before us to prepare people.”