Adventists Distribute 1.1 Million Books in One Day in Chiapas, Mexico 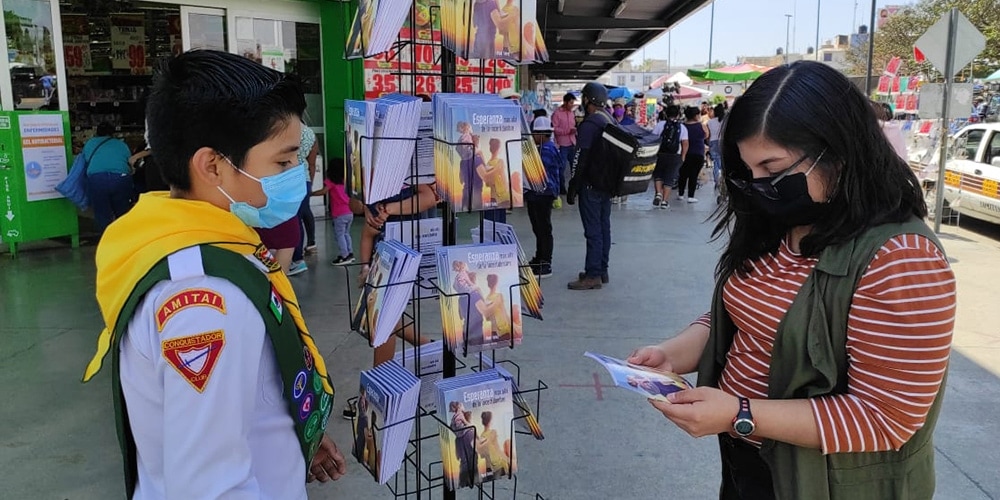 More than 1.1 million copies of the book Hope for Troubled Times, the missionary book of the year, were distributed across Chiapas, Mexico, on April 17, 2021. The state-wide initiative led thousands of Seventh-day Adventists to share the book with people in their communities amid the ongoing pandemic.

The book, written by Seventh-day Adventist evangelist Mark Finley, included a bookmark with telephone numbers of Adventist churches throughout the state and a special invitation to a national evangelistic campaign scheduled for June.

From early in the morning and most of the afternoon, church members organized by churches, youth clubs, and other ministries took to the streets and visited homes, hospitals, mountainous regions, and public spaces to share copies of the book.

Many found creative ways of sharing the books in the cities and towns where they live.

In the city of Comitán, in the east-central part of Chiapas, near the border with Guatemala, David Emmanuel, a member of the Amitai Pathfinder Club, decided to place a book stand by a supermarket entrance to offer a free copy of the book to customers going in and out of the grocery store. As Delfino Ruiz, assistant manager of the supermarket, noticed church members giving away books, he was overcome with emotion because just the week before, he wanted to find a Christian church to attend, and a group of Seventh-day Adventists came in that day with a book. “This is just what I was looking for, and it came to my workplace,” Ruiz said. Leaders later said that Ruiz expressed interest in enlisting in Bible studies.

In the mountainous region, Adventist women gave the book along with a traditional refreshing drink made of cocoa to passing drivers.

In Juan de Grijalva, a rural community in the western part of Chiapas, where most of the population is Seventh-day Adventist, young people and children spent the entire morning sharing food and water and handing the missionary book to drivers who had been detoured after an accident blocked the main highway that connects Chiapas to Mexico City.

Dozens of motorists caravanned through Tuxtla Gutiérrez, the state’s capital, with balloons and messages of hope as they distributed the book to onlookers through the streets.

Abdiel Velázquez, a three-year-old boy undergoing chemotherapy at Pediatric Specialty Hospital in Tuxtla, Gutierrez, shared the book with medical staff. Abdiel’s father, who is an Adventist pastor in north Chiapas, began sharing photos of his son wearing a smile as he gave out books.

“This was a wonderful day to see the entire church, children, young people, men and women involved in taking all necessary precautions to take the message of hope to all the corners in Chiapas, touching the lives of so many persons,” Ignacio Navarro, president of the Adventist Church in Chiapas, said. “We are happy that more than one million persons were touched by the message of hope today.”

In the later hours of the afternoon, leaders at the Chiapas Mexican Union office transmitted a live program where testimonies were shared on the day's experiences via Facebook and YouTube.

Adventist Church publishing ministries director Almir Marroni spoke during the online program to congratulate church members in Chiapas for their dedication and commitment to sharing hope in their communities. “The church in Chiapas is one of the unions that distributes the most literature around the world,” Marroni said. Inter-American Division leaders and GEMA Editores publishing house leaders also praised the witnessing efforts in Chiapas as they shared the missionary book everywhere.

During the online program, eight of the local conferences and missions within the union territory connected to share additional testimonies and missionary experiences of the day.

Months before the massive distribution day, the church promoted segments of the book through different social media platforms, radio spots, and LED screens in public spaces, according to Rogelio Morales, publishing ministries director in Chiapas, who oversaw the event. Morales said that the rest of the unions, or church regions in Mexico, were also distributing the missionary book on that day, but that “40 percent of the books distributed in the country correspond to the missionary effort of the church membership in the state of Chiapas.”