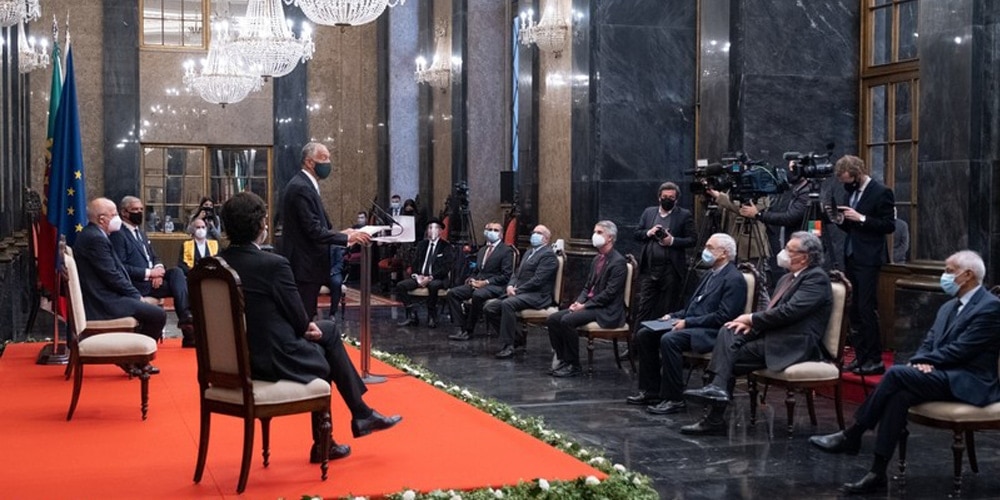 António Amorim, president of the Seventh-day Adventist Church in Portugal, attended a special meeting with other religious leaders in the Municipal Chamber of Porto on March 9, 2021.

During the event, Portugal’s president, Marcelo Rebelo de Sousa, said he acknowledged and valued the contribution of religious communities to the social fabric of Portugal.

Seventeen religious communities active in Portugal attended the ceremony, including representatives from Christian denominations and the Baha’i, Buddhist, Hindu, Jewish, and Muslim faiths. The ceremony was part of a program marking the beginning of de Sousa’s second term as president.

“Thanks to all those who make a reality of one of the fundamental freedoms enshrined in our constitution: religious freedom,” de Sousa said in his address to religious leaders. “Pluralism characterizes a free, open, and democratic society.”

De Sousa also said that “Portugal has a great debt to religious confessions in the areas of education, health, social benevolence, and crisis management, including our fight against the pandemic.” And, he added, “in the last painful and exhausting year, our unrelenting struggle would be different were it not for your contribution to crucial areas of national life.” According to de Sousa, churches were at the forefront of assistance to the underserved and underprivileged.

He also called on churches to engage in “constructive dialogue and unity of purpose, doing everything they can to stand for freedom, tolerance, mutual understanding, at a time when dividing and labeling seems so attractive.”

De Sousa also appealed to religious leaders, inviting them to make another contribution to Portugal: that “by words and deeds, you may assist in pacifying spirits, in accepting those who are different, in welcoming the stranger.”

Adventist leaders in Portugal said they believe that the Seventh-day Adventist Church’s inclusion is a recognition of the denomination’s commitment to the defense and promotion of religious freedom. It is a principle that includes the right to believe according to one’s conscience, and to change, abandon, or share one’s beliefs. It also supports interreligious dialogue based on respect for differences and public expressions of faith.

“After receiving the visit of the president three years ago, this invitation is also a sign of our commitment to being witnesses of our faith,” Adventist leaders said. “Also, it stresses our resolve to share solidarity and hope.”

The Seventh-day Adventist Church has a long and fruitful tradition of commitment to religious freedom, good relationships with authorities, and dialogue with other faith communities. Adventists understand that religious liberty and public affairs are relevant to its mission and contribution to society. Since 1978, the Portugal chapter of the International Association of Religious Liberty has supported every person’s right to worship freely and to positive interactions with other faiths.

The original version of this story was posted by the Portuguese Union Conference.