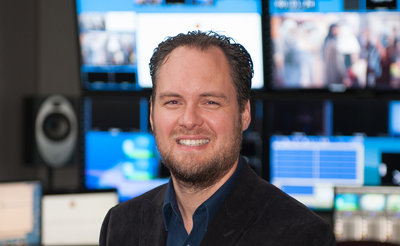 A 36-year-old Argentine producer, Gabriel
Begle, has been appointed vice president of the Hope Channel and will be
responsible for the development, production, acquisition, and broadcast of its
television programs.

“Gabriel will continue Hope Channel’s
tradition of developing quality television programs that appeal to viewers,
even a secular audience as they take their first steps toward God,” Hope
Channel chairman Pardon Mwansa said in announcing the appointment this week.

Hope Channel is the official television network of the Seventh-day Adventist Church.
Begle will become one of four vice presidents.

For the past three years Begle has produced one of Hope Channel’s flagship
programs, “Go Healthy for Good,” as well as the upcoming “Compassion” series
that highlights stories of how Adventists are changing their communities. He
has worked most of his career as a director of television production for
ministries in North and South America and has pastored several churches.

Begle said he looked forward to sharing stories that helped people find a
connection with God. “Modern TV is all about stories, and we’ll work diligently
to make Hope Channel the best storyteller in Christian media,” he said. “It’s
about making a connection with a world of people who are looking to God for a
better life.”

About 100 Adventist
students from across Europe affirmed their belief in the biblical account of
creation at a youth gathering in Portugal’s capital.

The students attended
plenary sessions and seminars by eight lecturers, mainly from U.S. Adventist
universities, at the three-day AMICUS (Adventist Ministry to College and
University Students) Congress on the campus of Lisbon University.

“This congress was
designed to foster faith in Creation and point out that both the universe and
the life it contains originated by direct action of a supernatural and
super-intelligent Creator,” said event co-organizer Barna Magyarosi, the
education director for the division.

Stephan Sigg, event
co-organizer and youth director for the Inter-European Division, said the
gathering celebrated creation “as an expression of God’s creativity and
ingenuity.”

Among the speakers
were James Gibson, director of the Geoscience Research Institute in Loma Linda,
California; and Tim Standish, professor at Loma Linda University’s earth and
biological sciences department. Morning devotionals were given by Derek Morris,
editor of Ministry magazine.

A single scholarship
has helped a team of nine theology students from Australia’s Avondale College
of Higher Education share Jesus with thousands of people in Malaysia.

Led by lecturer Mike
Parker and Pastor Vadim Butov of the Avondale Memorial Seventh-day Adventist
Church, the nine students presented five evangelistic series in the state of
Sabah during their semester break. Thousands in overflowing venues came to hear
the students preach.

A total of 243 people
were baptized, including a young woman whose father initially refused to allow
her to accept Jesus.

“If I’ve ever
believed in the power of prayer, it’s now,” said Alex Green, one of the student
preachers.

The series was funded
by a grant of A$12,000 (U.S.$10,500) from the Ministerial Training and
Scholarship Fund Management Committee, chaired by college alumnus and retired
minister Vern Parmenter.

The college’s School
of Ministry and Theology is planning a similar trip to Vanuatu in 2015.

A two-week evangelistic
series in Papua New Guinea resulted in 255 people being baptized in the Bangoho
River, the South Pacific Adventist Record
reported this week.

About 2,500 people camped in
Popondetta, capital of the Northern Province, for the program, with some
crossing the ocean or rugged terrain to attend. The venue was packed to
capacity each night as guest speaker Tony Kemo spoke on “God’s Final
Call.”

Among those baptized were
eight inmates from Biru prison.

Adventist church members
participated in a major town cleanup, marches and other community awareness
initiatives during the series, which was organized by the North East Papua Mission.

Southwestern Adventist University has
received a $500,000 gift from an anonymous donor that will provide its biology
department with an additional full-time faculty member for the next four years,
said new university president Kenneth L. Shaw.

The university will use the rest of the
donation to purchase mathematics and science equipment.

“I am so appreciative of this
gift,” Shaw said in a statement. “It will enhance our academics in a
substantial way.”

Shaw
took the helm at the university in Keene, Texas, on July 1, replacing Eric Anderson, who retired
after nine years as president. Shaw previously worked as dean of the Panama City Campus of
Florida State University.

Southern Adventist
University will launch an online radio station with Christian programming next
month, more than 50 years after its classical music radio station first went on
air with the goal of friendship evangelism.

“Community members, donors,
students, and many other groups approached us with their pledge to help make
this happen,” said WSMC general manager Scott Kornblum. “We believe listeners
will be excited to hear broadcasts that feature programming from LifeTalk
Radio, Amazing Facts, and Voice of Prophecy, as well as original content
produced right here at Southern.”

Details about the
Southern-produced content are being finalized, but initial plans include a
weekday devotional by Clear Word author and retired School of Religion dean
Jack Blanco, along with the recording and broadcasting of some of Southern's
more popular lecture classes, such as “Life and Teachings of Jesus.”

Italy: Church Gets
50,000 Visitors Via Google

Here’s a new way to invite
strangers into your church: put a panoramic view of the interior on Google
Maps.

The Romanian Adventist
Church in Rome has become the first Adventist church in Italy to allow Internet
users to pay virtual visits, thanks to the work of its project leader, Mircea
Popa, the Inter-European Division reported this week.

“This is a new opportunity
that allows many people to learn about the Romanian Adventist presence in
Rome,” the division said in a statement. “Come and visit us, too.”