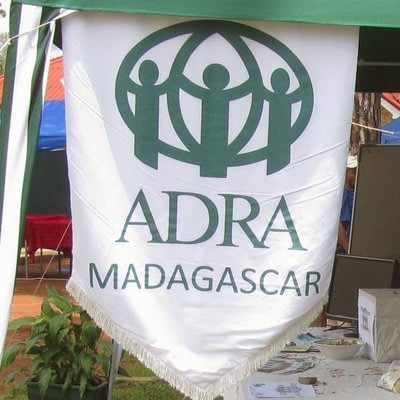 ADRA, the Adventist relief agency, is
partnering with the U.S. government's USAID in a $75 million initiative to improve health and
nutrition in Madagascar.

Tackling high rates of malnutrition
and growth stunting in children under 5, ADRA will work to deliver education
and promotion regarding maternal health, breastfeeding, caring for common
illnesses, sanitation and hygiene.

This partnership with USAID follows a
long list of successful ADRA projects in Madagascar, many of which were
implemented with the help of USAID, said Imad Madanat, ADRA International’s
vice president of programs.

“We value our partnership with
USAID,” Madanat said. “It has enabled us to deliver high impact interventions
and foster positive change around the world.”

The
meetings—one in downtown Sofia and the other in the city’s Roma district—were
conducted on Sept. 28-Oct. 11 under the world church’s Mission to the Cities
initiative to share Jesus in the world’s largest cities.

Vadim
Butov, a Russian-Australian national and senior pastor at the Avondale Church
in Australia, spoke to about 430 people nightly, 140 of whom got Bibles as gifts
after eight visits. Attendees also received free massage, blood pressure tests,
tea and cookies, and sharing books.

At the end
of the series, 50 people enrolled for Bible studies, and 36 are preparing for
baptism.

As Butov
preached, Craig Young, head elder at the Avondale Church, spoke to a crowd of
80 to 130 people nightly in a tent in the Roma district. A tent was used
because no suitably large hall could be found. Ninety-six attendees received a
Bible for coming for eight nights in a row, and 19 requested baptism.

CHRISTMAS SPECIAL: A teaser video of the "Peace on Earth" Christmas program being produced by Voice of Prophecy for ABC television.

Teams from U.S. television network ABC and the Voice of
Prophecy descended on the Spencerville Adventist Church in Silver Spring,
Maryland, on a recent evening to record a special Christmas program that will
be broadcast across the United States on Christmas Eve, Dec. 24.

The television program, directed and produced by the Voice
of Prophecy, an Adventist media ministry, has the theme “Peace on Earth” and features
a message by Voice of Prophecy speaker and director Shawn Boonstra, the North
American Division said.

“The gift of peace is the very best gift that we can share
with our friends and family this year,” the division said in a statement.

Broadcast times for the annual Christmas program are to be
listed on ABC television’s website in November.

The award recognizes the efforts of the university’s health-care
graduates to encourage healthy lifestyles in the region and beyond.

“This is a very important
moment being the first university in the country to be awarded this
recognition,” Hugo Cettour, the top health official for the Province of Entre Ríos,
said at a ceremony on Oct. 16.

He added: “What we are about to do here is just a symbol because
we know that the work you accomplish in this school is well beyond any
formality.”

University leaders said a landmark had been reached in the
school’s 116-year-old history but also spoke of greater responsibility.

“This new status provides us with a higher benchmark that we will
strive to keep,” said academic vice president Víctor Armenteros.

Adventist Health/Central
Valley Network is teaming up with another nonprofit organization to open a $10
million medical plaza in Fowler, California.

The 50-50 partnership
combines Children’s
Hospital Central California’s expertise
in pediatric care with Adventist Health’s expertise in rural and adult health
care to benefit the region’s families by improving access to high-quality care,
the two organizations
said in a statement.

“We’re very grateful
for this partnership to benefit our families,” said Wayne Ferch, president and
CEO of Adventist Health/Central Valley Network. “It will also support the
growth of our Selma and Reedley hospitals.”

The network operates
medical centers in Hanford, Selma, and Reedley in addition to 31 Community Care
clinics in 21 towns and other services.

“Children are
healthier when they have easy access to their care providers,” added Todd
Suntrapak, president and CEO of Children’s Hospital Central California, one of
the largest children’s hospitals in the U.S., with 356 licensed beds and a
medical staff of more than 550 physicians.

An
Adventist chaplain serving in Afghanistan has been featured in an article
published by the U.S. Defense Department.

The
chaplain, Captain Edgardo Rivas, provides spiritual guidance during the week
and conducts a Seventh-day Adventist worship service to civilian and military
personnel every Sabbath morning at Bagram Air Field, said the article published
by DVIDS, a media arm of the Defense Department.

Rivas, who
is on his second tour of Afghanistan, said a highlight of his job was when a soldier,
a former Adventist, embarked on a search for God’s will after a Sabbath service.

“After the
service, he approached me and told me that it was time for him to come back to
God,” he said. “Little by little God is doing His work, regardless where you
are.”

John Biama,
a military information technology specialist and a native of Sudan, said he was
surprised to learn that an Army chaplain was conducting an Adventist service.
As a church member for 19 years, he hasn’t missed a service.

“It feels good to take time out of our busy
work week to observe the Sabbath,” he said.