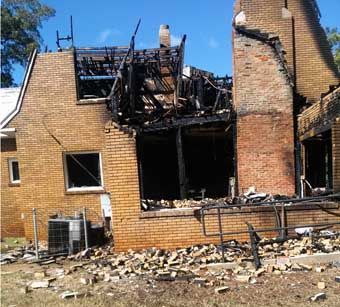 A small Seventh-day Adventist church, the Griffin Hilltop Seventh-day Adventist Church, had its building destroyed in an early-morning fire on Sunday, September 22, 2013, the Georgia-Cumberland Conference reports.The building is “a total loss,” officials there said. The church, once a physician’s home, had been located in the former residence since 2008. The building was on the top of a small hill, several hundred feet from a roadway, making it a challenge for firefighters to get water to the structure. It took several hours to bring the blaze under control and to keep it from spreading, according to media reports. Dan Hall, pastor of the Griffin church, said the congregation is now left to decide where to go from here. In the meantime, neighbors in the community have offered assistance. “Three local congregations have offered us the use of their facilities,” Hall said. “All three offers were very generous, and we will have a board meeting to decide on which location.” Conference officials offered their condolences to the members. “Any time there is pain, we hurt as well,” said Ed Wright, conference president. “And we pray for God’s healing to touch those in pain at this difficult time.” —with information from Tamara Wolcott Fisher, communication director, Georgia-Cumberland Conference