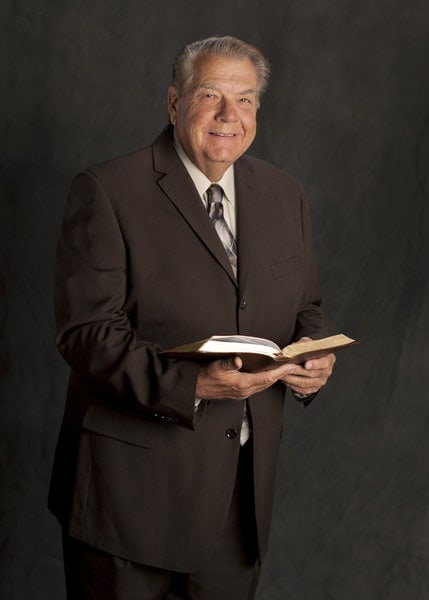 Updated Monday, May 18, 2015, to include funeral information in 21st paragraph, new quotes throughout

Ron Halvorsen Sr., a New York gang member who gave his heart to Jesus at age 17 and became a Seventh-day Adventist evangelist who led thousands of people to baptism, died on Friday after a lengthy illness. He was 76.

His son, Ron Halvorsen Jr., announced the death on Facebook late Friday evening and asked for prayers for his family, especially his mother, Carrol, and sister, Diane.

“I’m in transit to dad and mom. Just before they closed the door to the plane in Dayton, I received news that my dad has passed away,” Halvorsen Jr. wrote.

Ron Halvorsen Sr. was diagnosed with multiple myeloma, a cancer that starts in the bone marrow’s plasma cells and affects the whole body, in November 2014.

He had successfully fought off three previous bouts with cancer and believed that he would land on his feet again, making plans to travel to Norway and engage in other evangelistic activities, said Ruthie Jacobson, who prayed with Halvorsen just hours before he died.

“He was still working for the Lord,” she said, adding that he had recently told her that he still had a lot of work to do.

Condolences poured in from around the world, with friends describing Halvorsen as humble, approachable, and gracious.

“Elder Halvorsen was one of the Seventh-day Adventist Church’s great evangelists, and he preached the straight truth of the Bible,” said Ted N.C. Wilson, leader of the Adventist Church. “It hit home to those who listened attentively.”

“A giant has fallen. A true giant,” said John Bradshaw, director and speaker for It Is Written, where Halvorsen worked for more than a decade as an evangelist and prayer coordinator after he retired.

“Ron believed in preaching the power of the gospel,” Bradshaw said. “It had changed him, and he knew it could change others. And as God worked through Ron, it did so many times.”

Evangelist Mark Finley said Halvorsen left an enduring legacy as a Christ-centered, fearless biblical preacher who loved people and had a passion for evangelism that was undimmed through the years.

“He was consumed with the overwhelming desire to see men and women, boys and girls won for Christ,” said Finley, who called Halvorsen a dear friend whose life was intertwined with the Finley family for decades. “He was one of a kind but would to God we had 1,000 preachers like him whose whole life was consumed with winning the lost.”

He Prayed to the End

Jacobson, prayer ministry leader for the North American Division who worked with Halvorsen for the past two decades, praised him for the way he merged evangelism and prayer.

“He would not do evangelism without a lot of prayer,” she said.

He prayed to the end, she said. Jacobson prayed with Halvorsen often in the months after she attended a special anointing for him in November.

After Jacobson prayed, he said, “Wonderful, I can breathe. God is so good.”

He called her again for prayer on Friday morning, but his voice was weak.

“He had been going downhill all week,” Jacobson said.

She prayed and promised to visit him in the hospital where he was staying in a suburb of Orlando, Florida. She arrived five minutes after he died.

A memorial service will be held at 4 p.m. June 13 at the Forest Lake Church in Florida, the Florida Conference announced on Twitter on Monday. It will be live-streamed on the church’s website, forestlakechurch.org. Well-wishers can leave a comment for the family on a tribute wall on the website of the DeGusipe Funeral Home.

Watch Ron Halvorsen Sr. share how he went from gangs to God in an interview with John Bradshaw on It Is Written.

Halvorsen was born on Jan. 18, 1938, in a tough neighborhood of Brooklyn, New York, and joined a gang as a teenager. But his life changed drastically when a teenage friend, Jim Londis, helped lead him to Jesus when he was 17. (The video above tells the story.)

Halvorsen and Londis remained lifelong friends. Londis, a former pastor of Sligo Church and former president of Atlantic Union College, is now retired and living near Collegedale, Tennessee. He was traveling abroad and could not be reached immediately.

After accepting Jesus, Halvorsen went on to serve as a pastor in churches in Connecticut, Tennessee, and Takoma Park, Maryland, as well as at Southwestern Adventist University in Texas.

But he will no doubt be best remembered as a powerful evangelist with a remarkable personal testimony and an active prayer life. He never forgot how God changed his life as a young gang member on the streets of Brooklyn.

“I’ve held an evangelistic meeting every year of my life ever since” being converted at the age of 17, Halvorsen said in an interview on It Is Written about two years ago. “I told my wife, ‘Honey, if I die before Jesus comes, put a pulpit in my casket because I’ll come up preaching.”

He acknowledged to friends that he had lost count of how many people he had baptized. His best estimate put the figure at more than 10,000.

A favorite story that Halvorsen told about evangelism and baptisms occurred after he passed the 6,000 mark. As the story went, he approached a church leader and said, “Elder, I understand that series you held in New York City some years ago was a great success!”

The church leader looked not only puzzled, but embarrassed.

“No, I think you’re mistaken,” he replied. “That meeting didn’t turn out nearly as well as we had hoped.”

Halvorsen smiled. “Well, I think the number I’m hearing is that there were at least 6,000 baptisms in that meeting,” he said.

The pastor looked truly confused. Halvorsen had to have his facts terribly mixed up.

Halvorsen continued: “You see, elder, there was a woman at that meeting who was baptized along with her son. Her son was my friend and brought me to the Lord. I was baptized, and so far I’ve baptized more than 6,000 people in my ministry. So it seems to me you’ve had over 6,000 baptisms for that series you held.”

“Oh, thank you for telling me that,” the church leader said, tears welling up in his eyes.

They both shed tears as they thought about the amazing ways that God works.

Among the people whom Halvorsen baptized were Finley’s mother and sister.

“He was our local pastor in Norwich, Connecticut, when I was a college student,” Finley said. “I looked forward to coming home to hear his powerful Christ-centered sermons.”

“One of my fondest ministry memories is holding an evangelistic meeting with Ron in San Diego, California, alternating preaching and baptizing hundreds of seeking people,” Finley said.

Halvorsen worked as an evangelist for the Carolina Conference, Faith For Today, and the General Conference in New York. He also taught homiletics at various colleges and was ministerial director of the Mid-America Union. Before retiring, he worked as church growth director for the Southern Union. He wrote two books, “From Gangs to God” and “Prayer Warriors.”

In retirement, he conducted prayer seminars for the North American Division and worked at It Is Written.

Bradshaw said the last evangelistic series that Halvorsen held was for It Is Written in Charlotte, North Carolina, in 2013.

“It was vintage Ron, relentlessly lifting up Jesus,” Bradshaw said. “If there was one thing Ron loved to emphasize, it was God’s love and grace, God’s willingness and ability to save the worst of sinners. What an amazing thing to be remembered for.”

He said Halvorsen’s legacy would be the countless lives that he had influenced with the gospel.

“The first person I told of Ron’s death told me how her sister — who been away from God for 35 years — returned to faith in Jesus after hearing Ron lift up Jesus,” Bradshaw said. “And that has happened countless times. … All he wanted to do was tell people about the love of God; that they had hope in Jesus.”