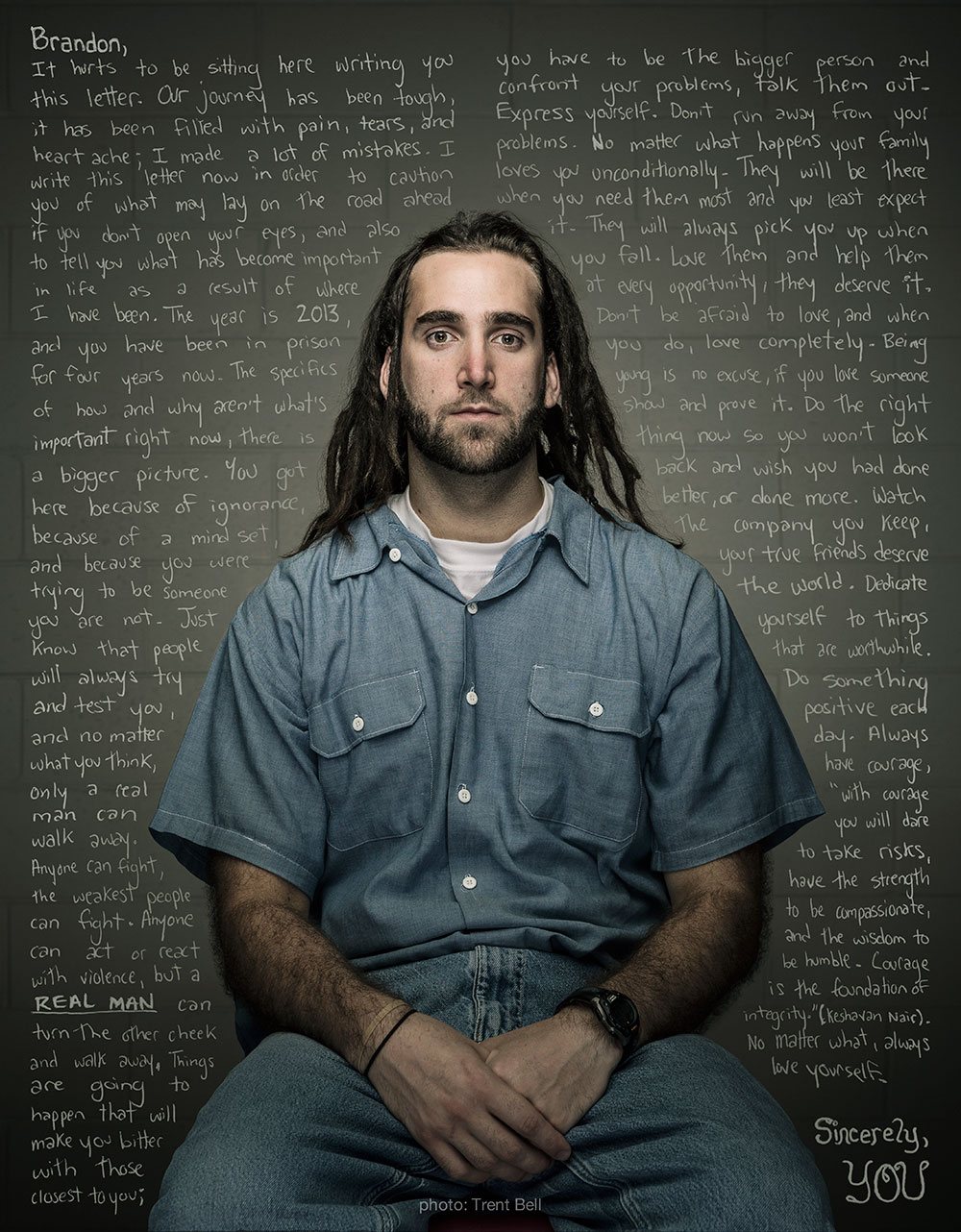 By Melodie Roschman, Andrews University, with additional
reporting by

We’ve all make mistakes that we wish we could undo. But what
if you could send a letter back in time, warning yourself against a poor choice?

That’s the question that Adventist photographer Trent Bell
asked 12 prison inmates, leading to a photo series called “Reflect: Convicts’
Letters to Their Younger Selves” that has been featured in media in North
America, Britain and Australia.

Bell decided to undertake “Reflect” in early 2013 when, only
a few days after the birth of his son, he learned that an Adventist friend with a wife and
four children had been sentenced to 36 years in prison.

The news came as a shock and a wake-up call, a reminder of
how quickly a single bad decision can change lives, said Bell, 37, who lives in
Biddeford, Maine.

“There were times when my son would look up and smile at me,
and the finality of my friend’s situation would rush into my head, and I would
hear a cold, thin voice say, ‘There but for the grace of God go I,’” Bell said
in a statement on his website.

With this in mind, Bell approached the prison system in
Maine with a proposal: He would take portraits of convicts, ask them to write
letters to their younger, pre-crime selves, and then superimpose the text over
the portraits.

With permission in hand, Bell shot portraits of 12 inmates
at Maine State Prison in Warren, Maine, in August 2013. After the photo shoot,
he returned to his studio and spent hours editing the photos and overlaying the
men’s handwritten letters over their portraits.

“There was a moment when I first saw the text overlaid
around the inmates and the project really came together,” Bell said. “It was an
immediate realization that something powerful had been created.”

Bell printed the portraits to be almost life-size and
displayed them to overwhelmingly positive reviews at Engine Gallery in
Biddeford, Maine, in February 2014.

In a video on Bell’s website, visitors described the portraits
as “extremely powerful,” “very touching,” and bringing them to tears.

The father of the youngest prisoner in the series, an inmate
identified only as Brandon, said that the portrait made him feel proud of his
son.

“He’s done so many other things to help others in his
situation, and as I see his portrait on the wall and the letter that he wrote,
it’s sincere and it’s my son, it’s all him,” the father said.

Bell, who received his master’s degree in architecture from Andrews
University in 2003, works full time as a commercial photographer, and his
photographs have appeared in The New York
Times, Conde Nast Traveler, and Good
Housekeeping
, among other publications.

Bell is not finished with the “Reflect” project, whose goal he said was to "encourage conversation, to
create empathy, understanding and a heightened experience of standing in
someone else’s shoes."

He plans
to develop it into a documentary film and, possibly, a second photo series, this
time applying the concept to other aspects of society.

“God gave me my parents, gave them biblical principles to
raise me with, and put his love deep in my thoughts process and heart,
where this project came from,” he said.

Watch a video about the project