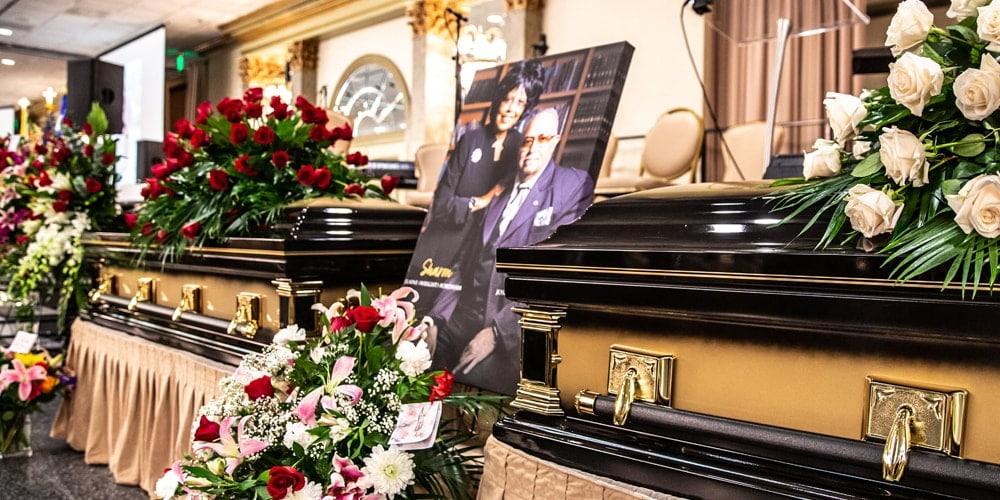 Some 1,000 attendees gathered Sunday, August 8, 2021, to remember Henry and Sharon (Wright) Fordham. At the time of their death in a house fire on July 18, they were president and first lady of the Allegheny East Conference (AEC) in the North American Division (NAD) of the Seventh-day Adventist Church.

Dave Weigley, Columbia Union Conference president, said, “On behalf of the Columbia Union family, and my wife, Becky and I, we send our deepest condolences. We have a deep appreciation for this couple that has touched so many lives.”

Pete Palmer, AEC’s vice president for administration, presented remarks with his wife, Dahlia. He shared that Henry J. Fordham III spent close to 30 years in AEC leadership as ministerial director, executive secretary, and, for the past nine years, president. “He never lost his sense of being grateful to God for using him,” he said.

Representatives from the City Council of Philadelphia and Pennsylvania House of Representatives sent official citations and condolences and gratitude for the impact the Fordhams had on their communities. Tom Wolfe, Pennsylvania governor, shared a letter honoring the Fordhams; and the mayors of Philadelphia and Baltimore also extended their sympathies.

Family members, friends, and Allegheny East Conference members and employees paid their respects through music via a mass choir and by wearing Henry’s signature beret.

Story after story echoed memories of how the caring couple — lovingly known to friends and family as “Butch” and “Sherry” — comforted, cared for, and pointed others to Jesus.

United States Senate chaplain Barry Black shared an anecdote of Henry Fordham, who was his mother’s pastor in the late 1980s. After Black rushed home from a trip to Australia to be with his mother, who was in a coma, he found Fordham asleep in the hospital’s family waiting room, “keeping watch.” Black said Fordham helped him grieve his mother’s death, as Black was on the “precipice of agnosticism.”

He added, “Butch and Sherry pulled me back,” helping him grow spiritually fit to have enough faith through his brother’s death in 2005 and again supporting him through his sister’s death in 2019. The Fordhams helped him “learn to keep believing, even though God didn’t make sense.”

Henry Wright, cousin to Sharon and a retired long-time pastor, delivered the eulogy: “Two good people, covered by the blood of Jesus, have shockingly and unexpectedly and tragically gone to sleep.”

Wright urged the attendees to use this period of mourning as a period of self-reflection: “I don’t preach eulogies; I preach homilies at funerals. Funerals are about the dead, but homilies are for the living. [The Fordhams’ future is] signed and sealed, but the question now is, ‘What about you?’ ”

Wright emphasized that a funeral gives one the opportunity “to face the fact [that] when you do the self-evaluation and come up short, don’t worry. Jesus has paid it all. Everybody here has been covered by the blood of Jesus Christ. I wish I could change July 18. I can’t do that, but I can claim I’m covered.”

The couple was laid to rest at Crest Lawn Memorial Gardens in Marriottsville, Maryland.