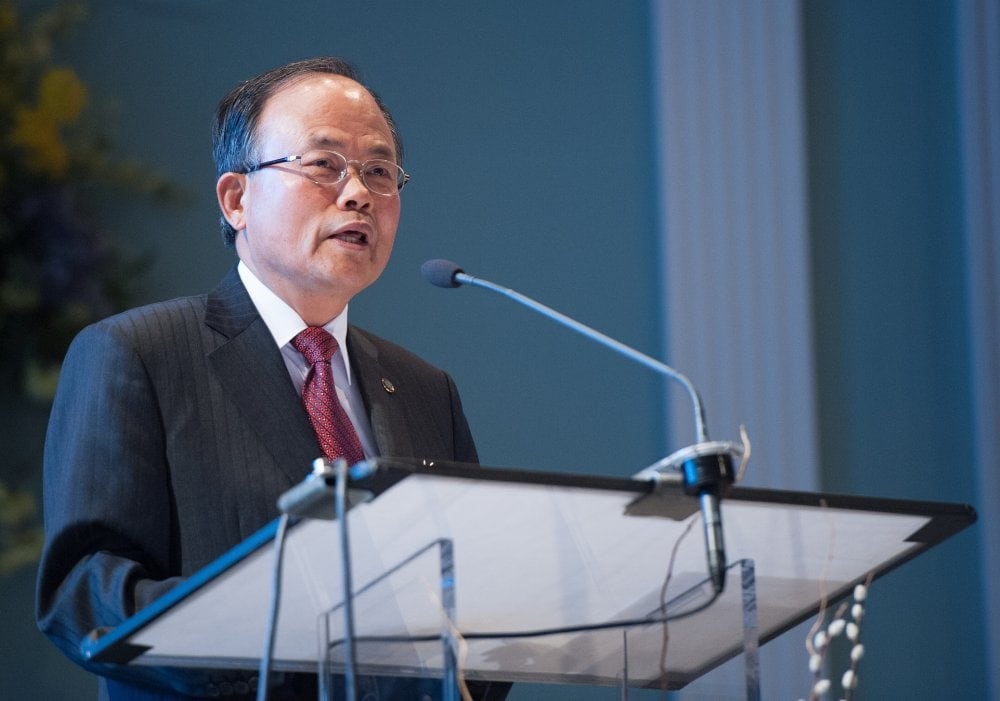 The Seventh-day Adventist Church’s Northern Asia-Pacific Division plans to roll out an ambitious initiative at its year-end meetings this week to increase membership in its territory to at least 1 million over the next five years.

The initiative, which will be presented at the division’s headquarters near Seoul, South Korea, comes as the Adventist Church’s 13 divisions and other entities hold a blitz of year-end meetings to announce their five-year plans to share the news of Jesus’ return.

The Northern Asia-Pacific Division’s goal is formidable for a territory with 1.6 billion people, making it the church’s largest in terms of population, but also among the least reached with the gospel, with only 3 percent identifying themselves as Christian. The other 97 percent are Buddhists, Shintoists, Muslims, Shamans, and atheists.

Division president Jairyong Lee intends to unveil the “Vision One Million 2020” initiative to boost church membership to 1 million at a five-day gathering that begins Thursday.

“As we begin another quinquennium, we should not simply continue with what we have done in the last five years,” Lee will say, according to a copy of his president’s report obtained by the Adventist Review. “We need to have a new start with renewed commitment and unprecedented dedication to the mission of the church.”

The Adventist Church now has 702,081 members in the Northern Asia-Pacific Division, which encompasses China, Japan, Mongolia, North Korea, South Korea, and Taiwan, according to division statistics. The division grew by 77,841 members and more than 100 new congregations over the past five years.

A Plan to Reach the World

In South Korea, Lee will caution attendees at year-end meetings that time is running short to share the Adventist message.

“We still have many mission opportunities in our territory. However, the opportunities will not always remain,” Lee will say. “Evangelism will become much more challenging in the near future. People are becoming more humanistic, materialistic, and egocentric as time passes. They are becoming more and more focused on surviving in a highly competitive society. 'We must work the works of Him who sent Me, as long as it is day; night is coming when no man can work’ (John 9:4).”

To reach its goal, the division plans to align its outreach efforts with initiatives promoted by the Adventist world church, including Mission to the Cities, Comprehensive Health Ministry, and Total Member Involvement. It also will rely on homegrown programs such as the His Hands Mission Movement, which prepares and sends missionaries within their own countries, and the 1000 Missionary Movement and the Pioneer Mission Movement, which sends missionaries between countries.

Such strategic planning is a key reason that church leaders and laypeople gather for year-end meetings at the General Conference, division, conference, and mission levels in late October and early November every year, church leaders said.

This year’s division meetings are particularly significant because they follow the Adventist world church’s General Conference Session in San Antonio, Texas, last July, an event that is held every five years to elect the church’s top leadership. Lee was elected to a third five-year term at the Session, which also chose his division’s secretary and treasurer. Many divisions are electing the other senior administrators and department directors at their year-end meetings.

“The meetings are required for voting items of business — policy, the budget for the following year, meeting calendars, and strategic plans — but they also give an opportunity for reports from administration, departments, and institutions, as well as networking with colleagues who may be facing similar issues,” said Myron Iseminger, undersecretary of the Adventist world church who was attending the Inter-European Division’s year-end meetings in Bucharest, Romania, over the weekend and into the start of the week before flying to Seoul for the Northern Asia-Pacific Division’s meetings.

“Right now, for example, the Inter-European Division is working in small groups to discuss details of a strategic plan for the new quinquennium,” he said.

A Closer Look at Year-End Meetings

The North American Division is also holding its year-end meetings, a seven-day gathering that will wind up in Silver Spring, Maryland, on Wednesday. Daniel R. Jackson, president of the North American Division, announced in his president’s report late last week that the division had 11 goals for the next five years, including 1,000 new congregations and the involvement of every one of his territory’s 1.2 million church members in preparing their communities for Jesus’ return.

The Inter-American Division announced at its year-end meetings, which are also ongoing, that it baptized 1.04 million people over the past five years, surpassing its goal of 1 million. But the division also said 690,000 members had been removed from its books as the result of its first major audit.

The Northern Asia-Pacific Division, which was created by splitting the former Far Eastern Division into two in 1997, faces unusual year-end meetings because its quinquennial council will elect department directors for the first time, said Sungsub Song, the division’s assistant secretary.

The other division that emerged from the split was the Southern Asia-Pacific Division based near Manila, Philippines.

While the year-end meetings may sound like a lot of traveling and sitting behind conference tables, they are essential for planning the work of the Adventist Church, Iseminger said.

“In addition to accomplishing required business, many divisions also rotate the meetings to the various unions within their territory,” he said. “This gives an added bonus of helping the leadership from across the division better understand the work in that union so that they can be more informed when voting on actions that affect that territory.”

“Bring warm clothes because it could be quite cold in Korea,” he said.