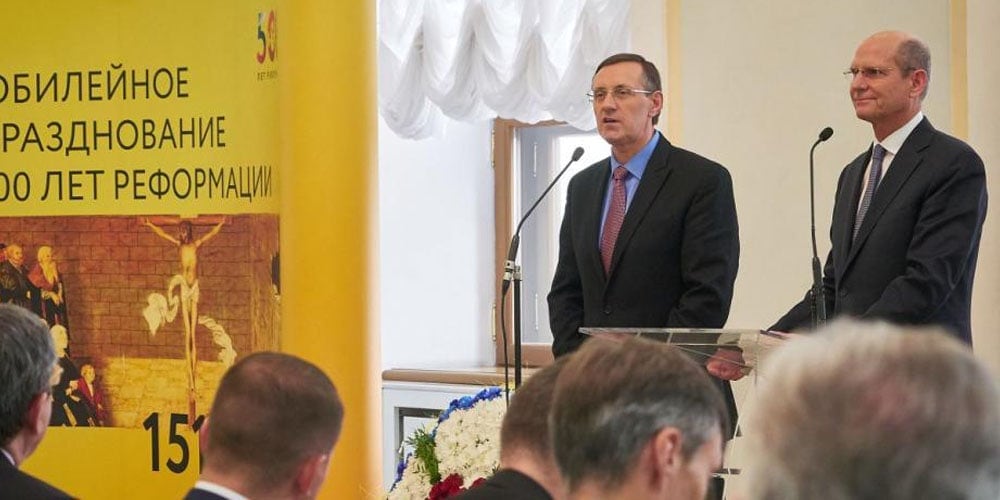 Ted N.C. Wilson, president of the Seventh-day Adventist world church, encouraged top clergy and government leaders in Russia’s capital to uphold the principles of the Protestant Reformation and to seek a God-guided reformation of the heart.

Keeping his focus on church mission, Wilson also emphasized practical Christianity and the three angels’ messages (a central theme of Seventh-day Adventist eschatology) in his remarks at a Moscow forum commemorating the 500th anniversary of Martin Luther’s nailing of the 95 theses to a church door in Germany.

“It is a great privilege on this day 500 years after the Reformation began, when there seem to be so much instability and challenges in the world, to continue the reformation in our hearts,” Wilson said in a brief speech to 200 leaders gathered for the “Reformation: 500 Years” event on Oct. 31.

He said the Seventh-day Adventist Church was grateful for the foundations of the Reformation, and he singled out several principles as especially important: only the Bible, salvation only by faith in Jesus, Christ is the only mediator, eternal life only through the grace of Jesus, and to God only be the glory.

Wilson said that those Reformation truths are proclaimed by sharing the three angels’ messages of Christ’s soon coming in Revelation 14.

“The very heart of the three angels’ messages is righteousness, the justification of Christ,” he said.

Pointing to Jesus’ words in Luke 4:18, Wilson added, “The Reformation must help make Christianity practical. Preach the gospel to the poor. Heal the broken-hearted. Preach deliverance to the captives, recovery of sight to the blind, and set at liberty those who are bruised. As the Reformation continues, may these principles burn in our hearts and help us truly fulfill the Protestant Reformation.”

He also thanked the Russian government for protecting religious freedom in a part of the world where it can be difficult for Protestants to spread the gospel.

Leaders from the Russian government and a number of religious denominations gathered at Pashkov House, an 18th-century nobleman’s mansion beside the Kremlin walls, to remember the Reformation. Among the 15 speakers were senior Kremlin aide Sergei Kiriyenko, who brought greetings from President Vladimir Putin; a leader of the Russian Lutheran church, which was a main organizer of the event; and Germany’s ambassador to Russia. Six religious songs were performed between the speeches, including a portion of Handel’s “Hallelujah” chorus sung by an Adventist choir.

Michael Kaminsky, president of the Adventist Church’s Moscow-based Euro-Asia Division, who interpreted Wilson’s remarks, marveled that senior clergy from the Russian Orthodox Church, the Roman Catholic Church, and the Islamic faith joined their Protestant counterparts in supporting the Bible.

“It was interesting to see people from various walks of life find something in common,” he said in an interview. “Everyone spoke about the importance of the Word of God.”

Oleg Goncharov, director of religious liberty for the Euro-Asia Division, was heartened by the attendance of top government officials from the Kremlin and the Moscow city government.

“They showed their support by speaking at the meeting,” he said. “I think Protestants and Seventh-day Adventists face a good future in Russia.”