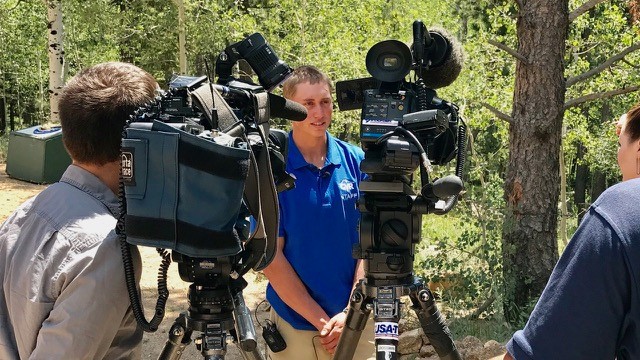 A bear attack took place about 4 AM on July 9 on center campus lakefront at Glacier View Ranch (GVR) in Boulder County, Colorado, United States. The incident involved Dylan, who preferred to be identified by first name only, a staff member. The bear wandered into the main area of campus where several staff members were sleeping by the tepees. Unprovoked, it attacked one staff member, dragging him about 10 feet. Campers were not threatened or involved at any time.

The on-campus medical team responded immediately and stabilized Dylan while the camp directors contacted emergency personnel. He was transported by EMS to Boulder for medical treatment. Lefthand Fire Department, Boulder County Sheriff’s Office, EMS, and the Colorado Department of Parks and Wildlife were immediately notified and responded.

During the attack, Dan Hansen, director of the GVR Christian Retreat Center and Summer Camp campus, said that other staff members present followed their training and diffused the situation before the bear could cause further harm. Staff and directors at GVR took appropriate actions and cooperated with the Colorado Department of Parks and Wildlife to track and remove the bear from the area. The bear was caught on Monday morning, July 10.

Staff at the camp, parents of campers, and Dylan himself, who went through the dramatic experience of being attacked by the bear some 24 hours earlier, felt a sense of relief at the news.

“I woke up to a radio call at 4:30 AM saying the bear was in the live trap,” reported Kiefer Dooley, director of GVR summer camps. “They had set three [traps] around campus, and it was caught in the one by the maintenance area,” he added.

“We expected to have such an outcome with the Colorado Parks and Wildlife rangers setting up traps,” Steve Hamilton, RMC youth director said. “With the event being so unexpected, we were naturally caught off guard, but our staff responded professionally and according to how they were trained.” It was the “quick reaction of the staff and [also] my reaction, what I did. I grabbed his ears and poked his eyes as fast as I could,” Dylan recalled the dramatic moment as he was being dragged for about 10 feet by an aggressive attack.

When it was all over, Dylan expressed his gratitude for his fellow camp friends. The 19-year-old teaches wildlife survival skills to the campers at Glacier View Ranch.
“I’m not afraid of the bears. I’m not afraid of sleeping outside. You just have to be aware and respect the animals,” Dylan said in a report by the Associated Press.

It only took him a few hours in the hospital to recover from his injuries, and he was back at the camp to the great relief of his friends and colleagues.

Due to its location in the mountains, just several miles from Rocky Mountain National Park, contact with various wildlife throughout the summer camp season is anticipated. “As such, we train our staff for contact, interaction, and incidents with wildlife including moose, wild cats and bears,” said Dan Hansen.

For the camp staff, issues of how to explain the situation to the public, and especially to parents of the two groups of children—one leaving the camp and another arriving on the same day of the incident—became crucial and the camp staff was expected to do their best.

“With each crisis, lessons are learned. We were also working on protocols established by the Colorado Parks and Wildlife. Hence, the area was sheltered from the arriving media reporters,” Hansen added.

“Thank you, everyone, for your concern and well wishes. We certainly felt the love with all of the texts, phone calls, and Facebook posts. All is well at Glacier View Ranch,” he commented.

The bear attack story received an unprecedented, though understandable, volume of attention by the local, national and international media. One media report said that “it would not be an exaggeration to call Dylan’s survival miraculous.”

A rapid response of the medical crew and alert staff was extremely crucial.

Dylan is temporarily left with nine staples to the back of his head, and four scratches to his forehead. He told RMC News Nuggets that he credits his “guardian angel, and training I received from my grandpa [on] how to respond to a bear attack.”