ADRA Commits to Achieving Objectives of the Global Compact on Refugees 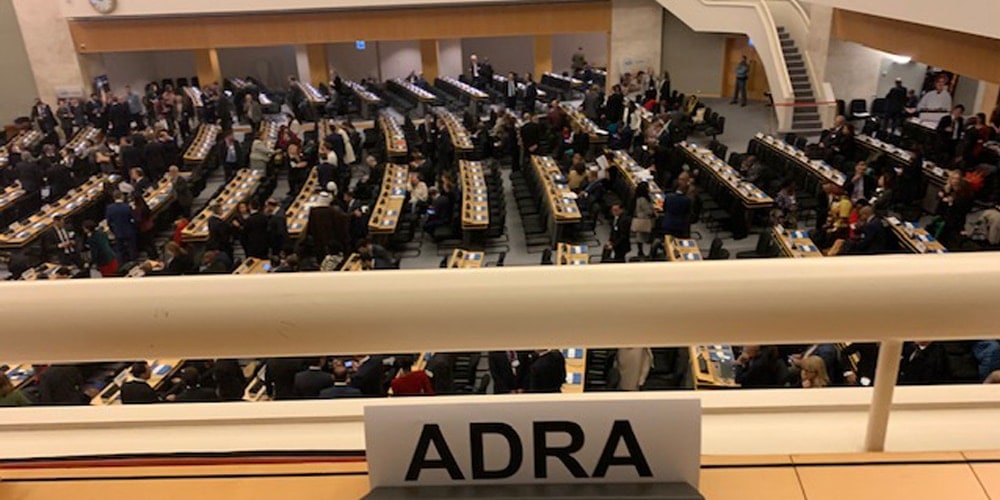 On December 17 and 18, 2019, the Adventist Development and Relief Agency (ADRA) joined more than 2,000 humanitarian practitioners and member states at the first-ever Global Refugee Forum in Geneva, Switzerland, to find transforming solutions to the world refugee crisis, benefiting both refugees and their host communities.

More than a third of the world’s displaced population — some 25.9 million people, according to a 2018 United Nations High Commission for Refugees (UNHCR) report — have been forced to flee their own countries entirely, leaving their homes behind and becoming refugees. Refugees are defined as people forced to leave their country in order to escape war, persecution, or natural disaster.

The forum, according to the UNHCR, is an opportunity to “ease pressures on host countries; enhance refugee self-reliance; expand access to third-country solutions; and support conditions of origin for return in safety and dignity.” ADRA continued working to improve the lives of 16.3 million people around the world in 2018, including refugees in Africa, the Middle East, Asia, and South America, well after the media spotlight had moved on to the next disaster.

As of October 2019, around 224,000 Venezuelans resided in Brazil, 385,000 in Ecuador, and more than 1.6 million in Colombia, according to the Regional Interagency Coordination Platform for Refugees and Migrants from Venezuela. To date, more than 4.7 million Venezuelans are living outside their home country. This number is expected to rise to 6.5 million by the end of 2020.

At the forum, ADRA pledged to support the most vulnerable, ensuring urgent assistance is provided to female-headed households, pregnant and lactating women, families with children under five, elderly people and people with disabilities, and women and girls affected by sexual and gender-based violence.

ADRA representatives made two commitments. First, they stated that as the official international humanitarian arm of the Seventh-day Adventist Church, ADRA, in partnership with the Adventist Church, which has the second-largest Protestant school system in the world, made a joint announcement of a new global campaign, “Every Child. Everywhere. In School.” The campaign is an urgent call to leaders around the world that all children, regardless of race, age, nationality, gender, disability, religion, or origin, have a right to earn and complete an education, and that being in school is a recognition of the value and potential of each individual child. One of the factors that motivated the campaign is the statistic that refugee children are five times more likely to be out of school than their non-refugee peers.

ADRA’s second commitment is for the crisis in Venezuela. As leaders pointed out, never before has Latin America suffered a social and economic crisis of this magnitude, a crisis that continues to disrupt the lives of millions of people across the region. A whole-of-society approach is a priority for any work with refugees and host communities, especially when it comes to addressing the needs of the most vulnerable, such as women, children, and people with special needs. It is for these vulnerable populations that ADRA pledged to remain committed to playing a key role in implementing a global compact on refugees and especially in the Venezuela crisis.  As a result, ADRA has committed US$1 million to the response efforts in Venezuela. These resources will be used to leverage the effect of other public funding that ADRA has received, including from UNHCR, to ensure there are no gaps in interventions. These projects will be implemented in Ecuador, Columbia, Brazil, Peru, and Argentina.

The Adventist Development and Relief Agency is the international humanitarian arm of the Seventh-day Adventist Church. Its work empowers communities and changes lives around the globe by providing sustainable community development and disaster relief.

The original version of this story was posted on the Adventist Development and Relief Agency news site.