‘A Gift to the City of Baltimore’ 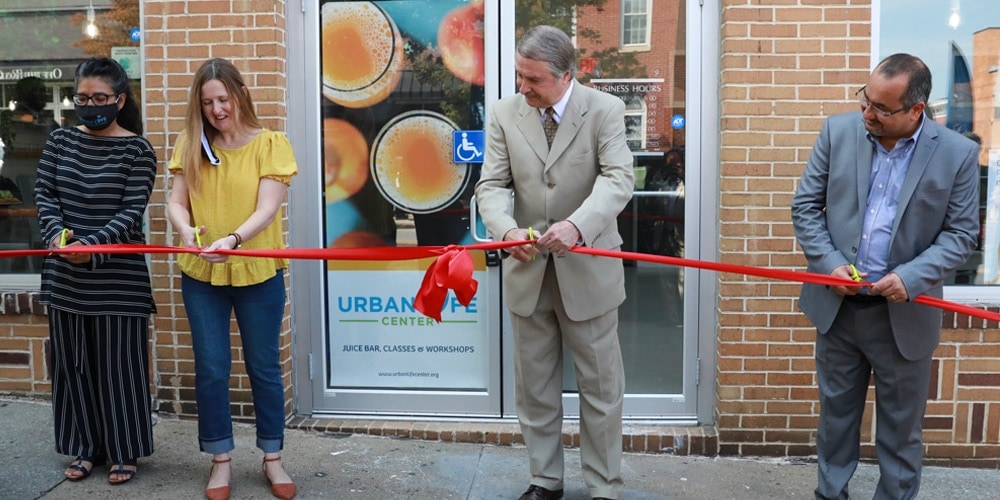 At the grand opening ceremony for the new Urban Life Center in Baltimore, Maryland, United States, on August 13, 2021, Frank Bondurant, vice president for ministry development of the Columbia Union Conference, declared, “The church needs to be willing to go wherever people are. And where are people? They’re in the cities.”

The Urban Life Center results from a strategic partnership between the Ellicott City and Baltimore-White Marsh Seventh-day Adventist churches. It aims to be a place for making friends and serving the community as a bridge to presenting the gospel message.

Bondurant, who also serves as the church planting coordinator for the region that includes seven Mid-Atlantic states and the District of Columbia, was joined by administrators from the Seventh-day Adventist Church headquarters, the North American Division (NAD), and the Chesapeake Conference, home to the new Baltimore initiative.

“It’s fitting that we have a ribbon-cutting ceremony, because this really is a gift to the city of Baltimore,” Jerry Lutz, president of Chesapeake Conference, said. Lutz was joined by Ellicott City Seventh-day Adventist Church lead pastor Paulo Macena and two employees of the new center in snipping the ceremonial red ribbon that officially opened the Eastern Avenue location.

The center features an innovative juice bar, where patrons can enjoy healthy juice combinations while learning more about health in a relaxed atmosphere designed for making friends. The storefront location began limited operations earlier this summer and now offers classes, seminars, and workshops in the areas of wellness, health, and leadership. It also provides project opportunities for serving the wider Baltimore community.

“This place is just an excuse — an excuse for making connections,” Gary Krause, director of Adventist Mission for the Adventist Church, said. Krause and his colleagues have launched similar centers in Asia, the Middle East, the South Pacific, and Europe. As in the Baltimore Urban Life Center, Adventist Mission collaborates with other regional entities of the denomination in planting new congregations in major cities of the world.

Macena said he is delighted to see the vision he helped launch finally come to fruition. “It is an exciting opportunity for us to do incarnational ministry,” he said. Macena and Baltimore-White Marsh pastor Diego Boquer have spent more than a year developing the model and the resources that led to Friday’s ceremony.

The Urban Life Center is designed to be a focus of Chesapeake Conference’s ongoing church-planting efforts in Baltimore. The 16,500-member conference has announced a goal to plant 35 new churches in its territory by 2025.

David Klinedinst, evangelism and church growth director for the Chesapeake Conference, worked with Macena and Boquer to create the project. For him, this is just the first step of many. “There are many neighborhoods in Baltimore with no Adventist church or ministry,” Klinedinst said. “The Urban Life Center is seeking to meet that need and ultimately be a launching pad and catalyst for other church plants in Baltimore.”

The original version of this story was posted on the Chesapeake Conference news site.