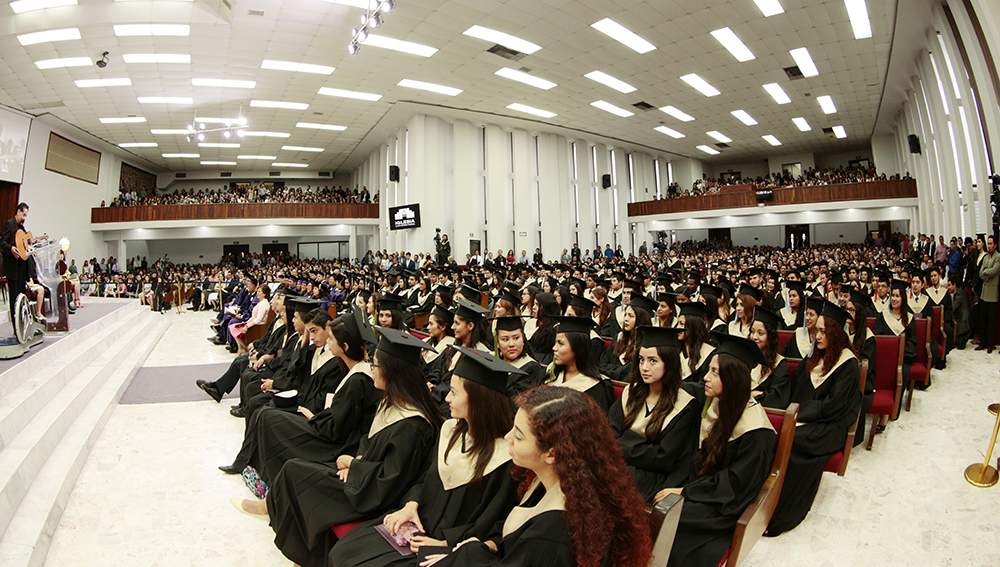 Seven Seventh-day Adventist employees from a single church entity, the Dominican Union, have made history by receiving doctoral degrees in business administration, an achievement that church leaders said would strengthen local church leadership and was worth replicating in other parts of the world.

The seven employees — a union treasurer, a fiduciary association director, three conference treasurers, a university financial vice president, and a radio executive director — were among 13 graduates who received the degree at Adventist-owned Montemorelos University in Montemorelos, Mexico, last weekend.

This was the first time that such a large group of church employees from a single union has been granted such a high degree in business administration in the church’s Inter-American Division, which encompasses the Caribbean, Mexico and Central America, and the northern part of South America.

“One of the best investments by the Adventist Church is to train men and women to serve the Lord with love and dedication,” said Cesario Acevedo, president of the Adventist Church in the Dominican Republic. “This doctoral training of our employees positions us well to the demands of the 21st century.”

Inter-American Division treasurer Filiberto Verduzco singled out the seven graduates as he congratulated the hundreds of graduates during a graduation ceremony at Montemorelos University on May 22. He read a letter of congratulations from Juan R. Prestol-Puesán, a native of the Dominican Republic who serves as treasurer of the Adventist world church.

“Through this letter from Juan Prestol, not only are your personal efforts recognized, but the vision and leadership of the church in the Dominican Union as well,” Verduzco said. “In the name of the world church treasurer and the Inter-American Division, we pray that the Lord continues to lead as you … share your God-given talents and capabilities with others and with the church in the Dominican Republic.”

He said the accomplishment of the business administration doctoral graduates was an example for other countries in the Inter-American Division.

Prestol-Puesán, who was unable to attend the graduation because of a commitment to participate in a ground-breaking ceremony for a hospital complex at Loma Linda University Health in California, said in an interview that the seven graduates from the Dominican Republic have increased their skills, capacity for service, and ability to mentor others.

“It feels good to see leaders respond positively to the calling of the Lord to expand their horizons,” he said. “They understand better the ways the Lord can use them.”

Those from the Dominican Union who received the doctorates include:

Moisé Javier, who has worked as Dominican Union’s treasurer for about 15 years, said the doctorate required significant work but he was pleased with the acquired expertise.

“This training will allow us to be able to train others in our church’s post-graduate business schools, lead in business administration research centers, conduct business consultations in the private and public sector, and take part in research projects,” he said.

The doctorates have also come at a financial sacrifice for the Dominican Union and for the graduates, who have paid a percentage of the tuition, Javier said.

“I am sure that my church will not be the same because the academic preparation of our administrators graduating today will translate into better served churches, better trained pastors, and institutions that are more financially solid,” he said.

Belkis Alcántara said the completion of her new degree will better equip her to lead the fiduciary association at the Dominican Union office, a position she has held for about a decade.

She recalled that her parents repeatedly told her when she was younger: “When you acquire knowledge, this is a great treasure that will always be with you. It could be that you will not be rich, but if you have knowledge, that is a treasure.”

“It hasn’t been easy studying while being a pastor’s wife, mother, worker and a student,” Alcántara said.

But she praised God and thanked church leaders for providing the opportunity to better serve the church.

Another graduate, Miqueas Fortunato, expressed joy after completing three years of studies by spending summers at Montemorelos University while serving as executive director for the church’s Radio Amanecer in the Dominican Republic, a position he has held for 12 years.

“This new degree will help me conduct and disseminate empirical and theoretical research in my work at the radio station as I strive to contribute creatively to my church,” Fortunato said.

His doctoral research was on corporate image, marketing, and social responsibility.

“I actually feel smaller now, but I have great enthusiasm to serve God and His church,” he said.