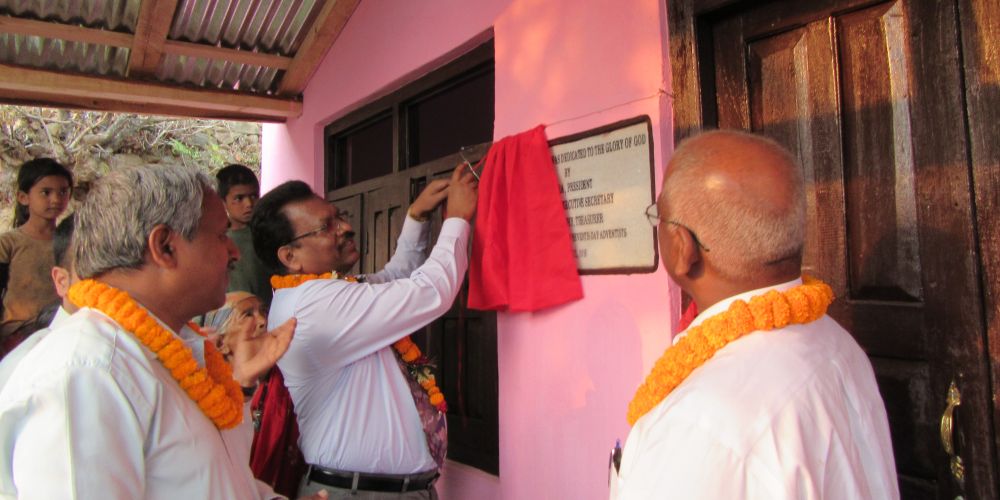 The three top leaders of the Seventh-day Adventist Church’s Southern Asia Division have made a historic visit to Nepal to open six churches, including several rebuilt after a devastating earthquake last year, and to witness the baptism of 22 people.

“The visit left a good impression, and we all were revived and renewed,” Pokharel told the Adventist Review.

With the six new churches, the Adventist Church now has 37 churches and 16 companies across Nepal. Membership stands at about 5,000 people.

Adventist work in the aftermath of an April 2015 earthquake that killed more than 3,500 people dominated the five-day visit, the first time that the division’s three senior officers have traveled together to Nepal.

The first two stops, in the capital, Kathmandu, were to the Adventist-run Scheer Memorial Hospital and ADRA’s local office. The organizations assisted thousands of people affected by the earthquake.

After that the three leaders, accompanied by Pokharel, headed to the remote village of Sirubari in the country’s Sindhupalchok District, one of the areas hardest hit by the earthquake. The three leaders led a dedication ceremony for the newly rebuilt Sirubari church. Local pastor Sankar Baral joined about 145 church members at the occasion, Pokharel said.

“Our leaders were welcomed with flowers, garlands, and Nepali caps,” he said. “Beautiful Nepali Christians songs were sung, and several members put on a traditional welcome dance.”

The visitors then traveled toward China’s Tibet border to dedicate the newly rebuilt Thumpakhark church, which had been flattened by the earthquake together with all of the village’s houses.

Fourteen people were baptized at the dedication ceremony in the mountainside church.

“In this village we have 27 Adventist families consisting of 57 baptized members and 23 children who worship the true God and tell people about Jesus,” he said.

Villagers are also slowly rebuilding their destroyed homes, he said.

In Kaping, a nearby village also on China’s border, the church leaders dedicated a rebuilt church at a ceremony attended by 120 people.

“Twenty Adventist families in this village lost their homes because of last year’s earthquake, and our church was also destroyed,” Pokharel said.

The reconstruction was funded by Adventist supporting ministry Gospel Outreach, and its regional co-director Linda Shultz laid the foundation stone in January.

Eight people were baptized at the dedication ceremony.

Gospel Outreach also supports a number of Bible workers, including Koirala and Baral, who function as pastors in their villages.

After the Kaping meeting, the church leaders raced back to Kathmandu, a four-hour drive, to catch a plane to their next destination, Biratnagar, Nepal’s second-largest city near the border with India.

Around 450 people gathered outside for the dedication of the new Bairani church, which seats only 200 people.

“It was a hot day, but all the people stood outside under the sun for five hours to listen to the leaders,” Pokharel said.

Article
How the Church Began
The four crucial steps Jesus took.
Voices
January-born Reflections
A combination of contributions designed for intellectual satisfaction.
Profile
Media Ministry Is Transforming Lives in Fiji
Despite lockdowns and restrictions, more than 600 have been baptized in 2021.