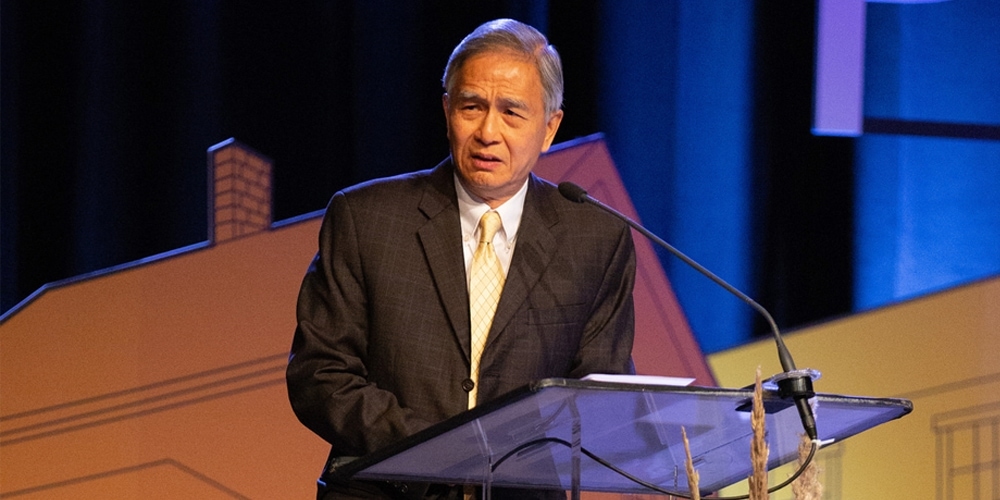 Where are you physically and where are you prophetically are the two questions we’re going to try to answer during this report,” stated  G T Ng, executive secretary of the Seventh-day Adventist World Church, during the opening remarks of his statement to the 2018 Annual Council delegates.

“How in the world did we become a global Church? Probably the most international Church in the world?” Ng inquired. “It’s because of prophecy!”

But, he cautioned, the work is not finished. Using Revelation 10:11 as a mandate, Ng quoted, “You must prophecy again about many peoples, nations, tongues and kings.” “This is our marching orders of the Church,” he said, ”to spread all over the world, to proclaim the Three Angels Messages.”

Concluding his remarks, Ng brought attendees back to Battle Creek. The first 30 years after the founding of the Seventh-day Adventist Church signaled unparalleled global expansion. “We caught the vision in the early days!” said Ng. “Right here in Battle Creek!”

Following his introduction of the Secretary’s Report, Ng introduced Gary Krause, director of Adventist Mission. Krause highlighted several entities that make up the mission family at the General Conference. These include the
Office of Archives, Statistics and Research (ASTR), Inter-Division Service Employees (ISE), Deferred Mission Appointee program (DMA), Adventist Volunteer Service (AVS) and the Institute of World Mission (IWM) which gives missionaries cross-cultural tools and training as they enter the field.

During his report Krause highlighted Adventist Mission’s many initiatives, including its
“Total Employment Tent Makers Program.” Total Employment allows people to seek jobs opportunities in their field, in challenging places, to engage their communities and share the love of Jesus.

Krause also featured the six
Global Mission Centers, a film contest for young adults and the Adventist Mission website that hosts a variety of mission stories, videos and news items.

Krause then turned the time over to David Trim, director of ASTR, who introduced Dragoslava Santrac, the new managing editor of the
Encyclopedia of Seventh-day Adventists (ESDA) project. Santrac stressed the significance of this new online information system saying, “Leaders of God’s church, church members, the new encyclopedia is not a luxury, it’s necessary.”

Santrac outlined the goals for ESDA as follows:

In closing, Santrac emphasized, “There are many biblical, theological, and historical resources published by other denominations that our church members can use and find useful but who will produce an encyclopedia of Seventh-day Adventist if not us? And if not now when? Please make ESDA one of your main priorities in the following two years. Together we can achieve the goal to launch the ESDA online in 2020. Together we can make ESDA speak Gods truth and faithfulness to our children and this world until Jesus comes.

According to Santrac, articles will be released on ESDA online starting early next year with a desire that all divisions and unions are equally represented.

In his statistical report, Trim shared that the Adventist Church has now reached a reported  membership of more than 21 million, with latest figures as of June 30, 2018.

Last year was the 15th year, and the 13th in a row, where more than 1 million accessions were reported to the Seventh-day Adventist church in the year.

Even with those statistics, Trim highlighted accessions are rising and that in 2017, someone became a Seventh-day Adventist every 23 seconds. He attributes this growth to church planting. In the last 12 months, 2,500 new congregations were established—502 churches and 1,998 companies.

“If we look at the total numbers over the last 20 years, you can see very steady growth,” said Trim. “To such an extent that the world-wide ratio for Adventist to the population is now at 361 people for every Seventh-day Adventist globally.”  Trim continued, “If we use numbers to identify trends in mission, they can help us. If we rely on numbers to shore up our identity, they will harm us.” Referencing Zechariah 4:6, Trim concluded that it’s “Not by might, nor by power, but by my Spirit, says the Lord.”

To help facilitate mission opportunities, the Adventist Church released VividFaith, a new app networking organizations needing help with people interested in serving. Italo Osorio, architect of VividFaith, asked committee members to focus on the future of this new tool that makes it easier to connect missionaries with service opportunities.

Ted N.C. Wilson, president of the Seventh-day Adventist World Church, highlighted the need for mission and the use of technology. Referring to VividFaith he said, “The more opportunities we have to serve and share our faith, the brighter and clearer people will see Jesus reflected in each one of us. When the app launches, it is hoped that there will be at least 100 opportunities listed from all across this globe.”
You can find a full article about the new VividFaith app here.

During the last segment of the Secretary's Report, Cheryl Doss, IWM director, along with representatives from the Seventh-day Adventist Theological Seminary at Andrews University introduced a brand new missions textbook titled
Introduction to Adventist Mission. It’s the first textbook of this kind produced by the Adventist Church.Wilson offered a prayer of dedication, asking that the Lord “would use the results of this book to the further expansion of the Adventist mission around the world.” Read the detailed article on Introduction to Adventist Mission here.