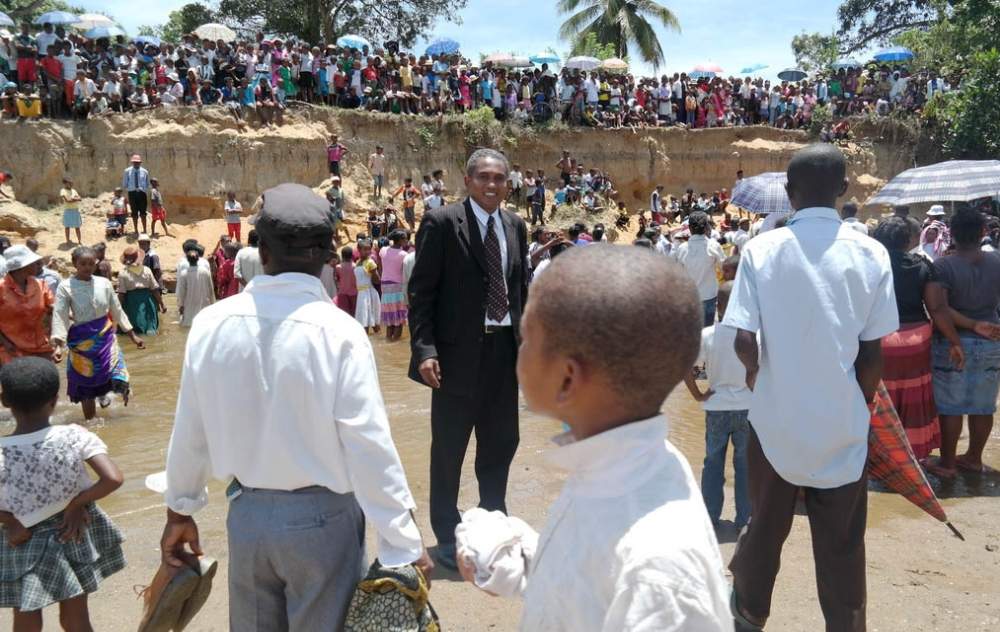 wo Seventh-day Adventist pastors from Ukraine led an evangelistic series that resulted in 610 baptisms in Madagascar.

The pastors, Michael Demyan and Roshel, a Madagascar native who goes by only one name, have traveled to the large island nation off Africa’s southeast coast for the past eight years as part of an evangelical program supported by the Adventist Church’s Eastern Dnieper Conference in Ukraine.

Evangelist Demyan and Roshel, who pastors an Adventist church in the Ukrainian port of Berdyansk, baptized 353 people after the first series in Ambodiangezoka, the Ukrainian Union Conference said. A second series in Ambanja led to the baptism of 134 people, including 19 prison inmates. The third series, in Ampanifiana, had 123 baptisms.

“This is how 610 people committed themselves to the Lord over one and a half months,” said Roshel, according to a statement published on the Ukrainian Union Conference’s website.

In reviewing the evangelistic initiative, Roshel linked its success to the active participation of local Adventists. He said church members had embraced the biblical principle of “sowing seeds of truth” through Bible studies and other outreach efforts in the six months before the evangelistic series reached the three towns. That prepared people for the “harvest time” when the pastors arrived, he said.

In addition, church members likened the evangelistic series to a holiday and eagerly invited friends and neighbors to join them at the meetings, he said.

“We praise God for the people who accepted Christ and pray that we will be able to hold several more evangelistic series over the next year,” he said.

The pastors baptized 413 people during the last evangelistic series in the previous year.

“I have a dream that a similarly large number of people will turn to God in Ukraine,” he said.

The Adventist Church’s Euro-Asia Division, which encompasses many former Soviet republics, including Ukraine, has one of the smallest memberships of any of the church’s world divisions, with about 115,000 members, according to the latest figures from the world church’s Office of Archives, Statistics, and Research. The country with the largest number of Adventists in the division, or nearly 50,000 members, is Ukraine.