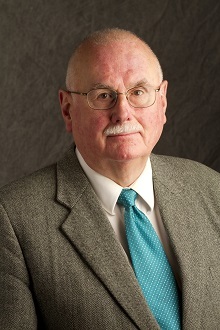 On Sabbath, November 19, hundreds of Adventist scholars attending their national societies’ annual meetings in San Antonio, Texas, united to celebrate the work of two longtime professors of the Seventh-day Adventist Theological Seminary for their 108 combined years of distinguished service to academe and the church. Publication of a Festschrift, a collection of essays by colleagues, in their honor, is one of the high tributes scholars may receive for their work.

Robert M. Johnston, retired New Testament scholar, received his Festschrift during the Sabbath morning meeting of the Adventist Society for Religious Studies (ASRS) at the San Antonio Hyatt hotel. It honored Johnston’s 60 years of teaching and other service to the Adventist church at several levels and in different parts of the world. Before becoming a celebrated seminarian he served for two years at Fresno Union Academy teaching Bible, History and Spanish. Later, he and wife, Madeline, made pioneering contributions to the growth and education of the church in Asia: 1958-1969, they served in Korea where he was head of the religion department at the Korean Union Training School which became Korean Union College (now Sahmyook University); from 1969 through 1970 he was acting dean of the graduate School of Religion at Philippine Union College. Subsequently, he was earnestly recruited for the Seventh-day Adventist Theological Seminary, where he arrived in 1973. As Madeline says, “we’ve been here ever since.” Johnston retired in 2002, having spent much of his time at the seminary as chair of the New Testament department.

Johnston’s admiration around the world of New Testament scholarship for his work on parables is reflected in the focus of his Festschrift, entitled Biblical Parables, a compilation of studies on Old and New Testament parables by 20 scholars, including such leaders in the field as Craig Keener and Craig Evans.

On Sabbath afternoon, a rather more dramatic event unfolded during the Adventist Theological Society (ATS) annual meeting at the Laurel Heights Adventist church, a few miles away from the San Antonio Hyatt. Society leaders staged an interruption of meeting proceedings to surprise their honoree, Richard M. Davidson, the seminary’s John Nevins Andrews Professor of Old Testament and Biblical Theology, whose 48 years of service include 25 as chair of the seminary’s OT department. While several members of Johnston’s family were on hand to share in the celebration of his work, the ATS opted for surprise and almost ruined it. Davidson recounted an intriguing story about how he could have found out about the surprise. He said, “One colleague was not aware it should be a secret, and sent me an email mentioning the Festschrift. Before I got around to opening his email, he learned that the Festschrift was supposed to be a secret, and sent me another email telling me to ignore the previous email that he had sent. Since I regularly open my emails starting from most recent emails backward, I came upon this later email before the previous one. I followed his instructions and deleted his previous email without reading it. Thus the surprise element for the Festschrift was preserved!”

Davidson is widely known and highly regarded for his work in multiple areas of biblical scholarship including Old Testament Exegesis, Intertextuality, Typology, Human Sexuality, New Testament Studies—particularly in the book of Hebrews—and Church History. He is also a dedicated outdoorsman who has earned the coveted title of fourteener, meaning that he has conquered all 54 mountains in the state of Colorado that are at least 14,000 feet high.

Jiří Moskala, seminary dean, who edited the book, Meeting With God on the Mountains, and presented it to Davidson, linked his mountaineering triumphs to spiritual victories, a message that comes through clearly in Davidson’s own words: “The most important thing to do in order to achieve one’s goal when in a very dangerous passage in the mountains is to look forward and up—never down . . . .” Davidson thanked the 32 colleagues and former students who honored him by contributing to the book.

Johnston’s thank-you response was typical of the dry and subtle wit that is part of his teaching and personality. He has contributed to many Festschriften written for other scholars, and received one of his own by Korean students from his days at Korean Union Training School. But he referred to his recognition now as the privilege of being the bride, instead of always being one of the bridesmaids, and considered the dedication of a Festschrift in his honor as a function of the success and graciousness of his students. Now in his ninth decade, he offered two vital insights to his admiring audience on how someone could qualify for the honor of a Festschrift: “Firstly, you need to keep breathing for a long, long time. Secondly, you need to choose quality students.”

The thousands of students and others who have benefitted from the brilliant and godly work of these two individuals, pray that while time lasts God will keep them breathing for a long, long time yet, so that they may continue to bless this church and all the world with their ministry.