For many in the United States, Thanksgiving means feasting on good food, catching up with loved ones, and expressing gratitude for blessings. For others, the holidays bring added strain as they’re struggling to put food on the table, and in 2022, as grocery prices have soared by 13 percent nationwide, more families are feeling the pinch.*

On Sunday, November 20, volunteers at the Seventh-day Adventist Church’s North American Division (NAD) headquarters in Columbia, Maryland, helped address this need by giving away 10,000 pounds (4,445 kg) of fresh produce. Despite the brisk weather, a long lineup of guests was waiting outside the NAD building 30 minutes before the event’s scheduled 10:00 a.m. start.

“By 11:30, we’d given away every scrap of food we had … more than 300 bags. And people were still coming hours [later],” Orlan Johnson, director of the NAD Public Affairs and Religious Liberty (PARL) department, said. He added, “Everyone was so grateful for what we were doing. [The turnout] demonstrated the need, and I’m glad we were able to supply that need.”

Strong promotions, including social media, website, radio and TV ads, and print flyers attracted a diverse group, including a family from Ukraine. Johnson said, “[This family] couldn’t speak English, and I could only tell them who we were. Still, I could sense their gratitude. And I think they could sense our joy in providing. Being able to help them thousands of miles away from [the chaos in Ukraine] really touched me.”

The NAD’s first Thanksgiving giveaway was held in 2017, shortly after its new headquarters’ grand opening. “When the NAD moved to Columbia, the late Dan Jackson [then NAD president] challenged us to have a positive community presence, not just be an anonymous office building,” Melissa Reid, the NAD’s associate PARL director, said. The annual giveaway was birthed from that challenge and has previously included health screenings and vaccination clinics. Thanks to these and other efforts, Jackson’s vision came to life. Maryland’s governor recognized the NAD for its significant community impact in 2018.

Organizers praised the more than 30 NAD and local church volunteers for the day’s success. “Due to the record number of volunteers, we were able to pack all those bags in less than an hour,” Reid said.

“It almost looked like a factory in there,” Johnson added, chuckling.

Furthermore, while this event is led by PARL, “it is absolutely a collaborative effort,” Reid said, including Adventist Community Services, Literature Ministries, Children’s Ministries, In-House Operations, and others.

Reid noted, “Everybody was excited to be there and support [the event] on a Sunday morning … in the cold, and that’s so nice to be part of; it showed me how special our work environment is.”

Thanks to this spirit of volunteerism and the team obeying God’s call “to be the hands and feet of Jesus,” Johnson said, “the day went exceptionally well.” 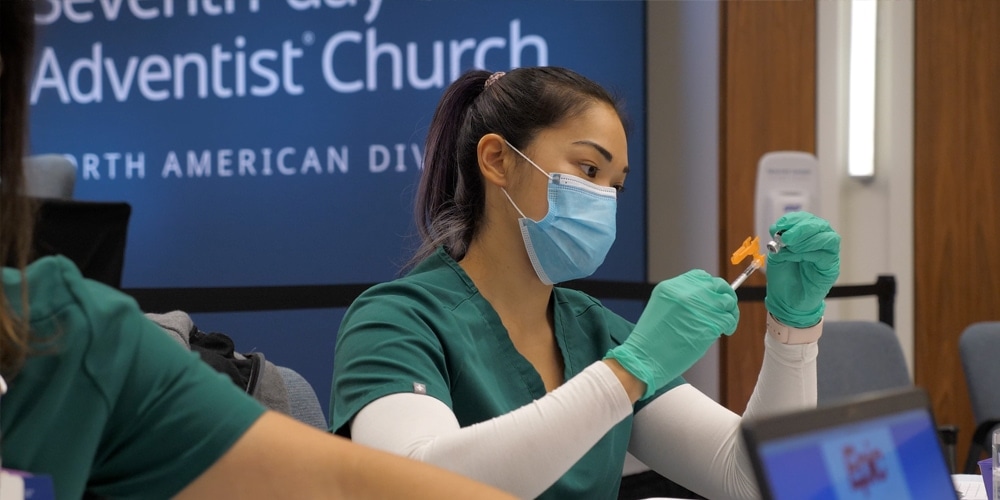