Nabal and the Drummer Boy 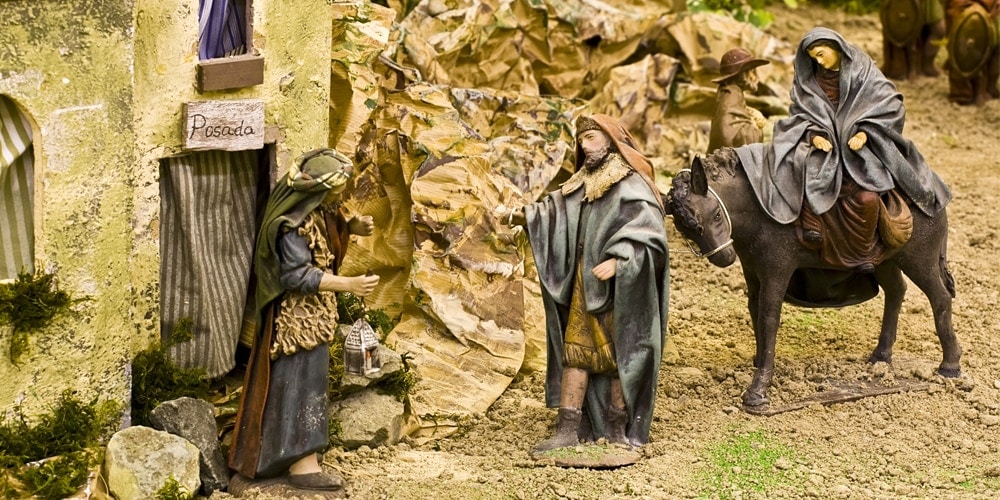 The boy lost himself in his music that night. He played with all his heart, like he had never played before, oblivious to the world, oblivious to all but the Toddler as he played his “alien” tunes on his alien drums. Not alien to him, but to innkeeper Nabal who could hear the music, though for him it was falling on deaf ears. He didn’t care a whole lot for aliens, though he’d once collected taxes for them. He didn’t care much for locals either, and they returned the favor. What counted with Nabal was coins he could count. But some of his neighbors in this village of a few hundred, and some of his guests would later say they had enjoyed the music. He couldn’t tell them all they wanted to know about it. High and low people went through Bethlehem. Some women who worked for him knew more about it: they were from distant lands with distant songs and dances.

The night of the boy with the drums was only a memory. But Nabal still squirmed involuntarily every time it grated the insides of his head and poked on his heart. He should never have gone to the house. He should have stayed inside his inn, busy or bedded. But he hadn’t really gone so much as he had been drawn—irresistibly drawn—over there. He knew who was in the house: a man, his wife so young she might have been his child, she and he and their 2-year-old child, and—and what? Sometimes he still disbelieved his eyes, ears, memory, everything. The aliens had filled his village and the house that night: not the aliens he once worked for, but men from the East, a royal covey, dismounting, “parking” their camels, gathering their elegance about them, moving with intention toward and into the house. And among the magi and their attendants, there was a boy. You could not tell that he didn’t belong. No one—and everyone—belonged in that night. Under the stars and the star that night everyone outside was longing to be in; and everyone inside wished everyone else could have been.

Nabal’s aloofness failed him that night among the outsiders, his heart pounding as drummer boy drumsticks played something that moved him strangely, which itself was strange. The memory lived inside Nabal as if his own eyes had absorbed the entire scene within, so that he could no longer distinguish between dramatic imagination and endless narration. The world had stopped: village rabblerousers; other curious locals; the Eastern kings; their respectful servants; the strong, quiet, self-effacing man; the drummer boy; every one of them and beings unnamed and unseen, it must have been, the world of that little room, from fore to rear of the crowd, had bent themselves to the ground before the Toddler the woman was caring for. Her name was Mary, Nabal learned; and Mary had told everyone the Toddler’s name, Jesus. And it was then, as one, then another, and another prostrated head rose up, you could hear that silver-treble voice, clear across the yard: “Baby Jesus, I am a poor boy too, I have no gift to bring that’s fit to give a king. Shall I play for you pa rum pum pum pum, on my drum?”1 Earnestly, filled to overflowing with the spirit of worship, the boy looked back and forth into the Toddler’s face, the quiet man’s face, Mary’s eyes. The crowd looked too, and a gasp escaped a woman in the middle of the crowd. Afterward she said she thought she had seen the Toddler nod. The drummer boy thought he saw a nod too, and told the story that way forever after, about how Mary, all the people, and even the animals worshiped as he played. He said: “I played my drum for Him” then he would add the riff of his rhythm, “pa rum pum pum pum; I played my best for Him, pa rum pum pum pum, rum pum pum pum, rum pum pum pum. Then He smiled at me, pa rum pum pum pum, me and my drum.”2

Those who saw said that the star’s unearthly light was in the face of the boy as he played. Nabal could never forget how close he came that night to revamping his entire business model. And I never remember the drummer boy now without sensing that my worship deserves a better focus. The kings’ gifts of gold, incense, and myrrh express their hearts’ nobility. Two mites were all another woman had (Mark 12:42). My drum is all I have. Sure, someone may be blessed, be moved to give, to surrender all, to worship in the Spirit or in Spirit and truth while I play. But human reaction is not the focus of my worship. I don’t play for recognition; I play for Jesus. I don’t play for applause; I play for Jesus. I don’t play for comparison; I play for Jesus. Teach me to play for You, Jesus. Teach me, Jesus, to play my drum.

1“The Little Drummer Boy,” from www.traditionalmusic.co.uk.