Two Are Better Than Three

Two, four, six, eight, how many snacks a day should we take? 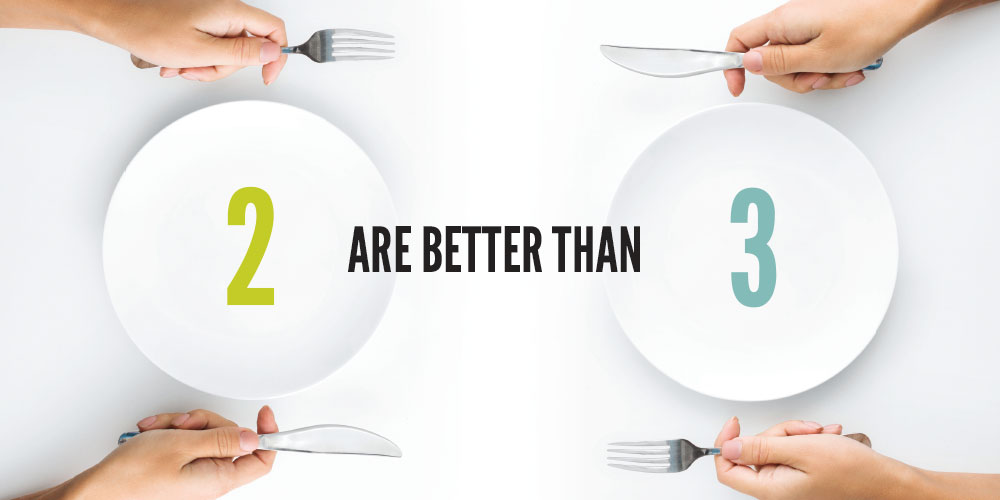 You must have heard of intermittent fasting (IF). It’s become a popular plan of voluntary food abstinence focusing on when a person eats, instead of calorie numbers or food types. Perhaps the best-known approach is the 16/8: 16 hours of fasting; eight hours of eating anything anytime. There’s also alternate-day fasting: 24 hours of fasting; 24 hours of eating freely. Besides these you could choose the 2/5 approach: fasting two days a week, eating five. One more, worth as much mention as the rest, the Warrior Diet: a 20-hour fast and one large meal consumed at night.

Learning of these suggested a question to me: is advocacy for two meals a day related to IF?

Two Instead of Three

Here’s a quote on eating habits that favors two over three: “Our plain food, eaten twice a day, is enjoyed with a keen relish. We have no meat, cake, or any rich food upon our table. We use no lard, but in its place, milk, cream, and some butter. We have our food prepared with but little salt, and have dispensed with spices of all kinds. We breakfast at seven, and take our dinner at one. . . . I have within eight months lost twenty-five pounds of flesh. I am better without it. I have more strength than I have realized for years.”1

Fifteen days after the day the Adventist Church was organized officially, May 21, 1863, Ellen White had her first major vision on health. It was Friday evening, June 5, and the Whites were visiting Brother Aaron Hilliard’s little farmhouse. They had just welcomed the Sabbath. Near the end of their prayer session Ellen placed her hands on James and pleaded for his health. All at once her thrilling exclamation, “Glory! Glory! Glory!” announced another vision. For 45 minutes she said nothing. Then she took her characteristic deep breaths, indicating that her vision was over. That vision was the nucleus of the Adventist health message.

Many church leaders and lay members embraced the new lifestyle called “health reform,” which was outlined in Ellen White’s vision. The regimen included a plant-based diet; freedom from caffeine, alcohol, and tobacco; plain food; and the two-meal plan. The health of workers and members who subscribed began to improve. But over the years interest among Adventists in a two-meal-per-day schedule has waned.

Hana Kahleova has reported on two studies on the relation between meal timing/frequency and weight gain. A small crossover study showed body mass index (BMI) increasing as meals increased from two to six.2

A subsequent comprehensive study included 50,660 individuals from the Adventist Health Study 2, all age 30 or older.3 Its focus was on possible linkage between when and how often people eat and their BMI. Participants of various body types and sizes were involved, and their eating habits and health outcomes were monitored for an average period of seven years.

The study showed more weight loss/decrease in BMI for people who regularly ate two meals per day. Conversely, those who ate more than three meals a day increased their BMI, and the more meals they ate, including snacks, the greater the weight gain. Additionally, researchers found that skipping dinner altogether and having a long, 18- or 19-hour overnight fast contributed to weight loss. Other good eating practices included leaving five or six hours between breakfast and lunch and abstaining from snacks throughout the day.

Three years ago my doctor told me I had diabetes and prescribed mini meals throughout the day to keep my blood sugar steady and eliminate insulin spikes.

Astonishing to some, perhaps, but Ellen White’s counsel of 1863 already gave the basis for successful IF programs. Some IF programs advocate coffee drinking, indulgence in unhealthful foods and intemperate practices while enjoying the recommendation of many health professionals as the best treatment for diabetes and other diseases.

In 2015, 30.3 million Americans had diabetes, and 84.1 million (age 18 and older) had prediabetes. These numbers are increasing at alarming rates each year.

The first thing most physicians tell newly diagnosed diabetics is to lose weight, a struggle for most people. The two-meal daily plan helps most practitioners lose a significant amount of weight and maintain this loss. Anyone interested in a healthy, Adventist style IF program will need to follow certain paramount principles that Ellen White identified.

Principle 1—eating time, and steady: practitioners must choose the eating times for their two meals and stick to the schedule faithfully. They should establish the rest of their plans around these two fixed times. White’s household ate at 7:00 a.m. and 1:00 p.m. regularly for more than 40 years. So choose a time that’s good for you and stay with it.

Principle 2—gap time, and plenty: there should be at least five hours between your first and second meals.

Principle 3—snack time, not: despite the vigor of product advertising, “healthy snacks” is an oxymoron. Big Pharma, uncaring health professionals, and the food industries push “healthy” or other snacking for the sake of something green that many value more than they do your health—and even their own, sometimes.

Principle 4—rest time, for the insides: just like you, your stomach needs—and deserves—a good night’s rest. Your last meal should be four to five hours before your bedtime. New IF research shows that the daily overnight fast of 15-19 hours restores blood sugar levels to normal. Food remaining in the stomach during the night causes the stomach to work the night shift and forfeit its needed rest.

Principle 5—variety time, and simple:treat yourself to a variety of simple foods at any meal. Sliced tomatoes, corn on the cob, black beans on brown rice—these will do more glorious good than many of the complex and refined products we purchase, with their additives and lab-designed colors for preservation and attraction. Eat delicious; eat simple; eat whole foods whole.

Principle 6—drinking time—water, that is:your body probably needs more fluid than your thirst cravings tell you. Work your thirst out with water: drink two glasses upon arising; drain six to eight glasses down during the day in between your two meals. The great “thirst quenching soda” story will give you at least 10 teaspoons of sugar and other chemicals per bottled serving. That will actually increase your thirst, making you want another serving.

Would you wash your dishes in teaspoons of sticky sugar? Why your stomach, then? In the Adventist Health Study women who drank the most water were at the lowest risk of a fatal heart attack, while those who drank the most nonwater beverages, such as fruit juice, soda, coffee, and tea, increased their risk of a fatal heart attack two and a half times. For men, the risk increased by 50 percent.4

Principle 7—workout time, but not all-out: exercise will help your digestion; a brisk walk—not a sprint—after a meal is especially helpful.

My Two and Three Story

Three years ago my doctor told me I had diabetes and prescribed mini meals throughout the day to keep my blood sugar steady and eliminate insulin spikes. He told me that there is no insulin surge when small meals are close together. He said, “Eating four to six small meals a day actually raises your metabolism and helps to speed up your fat-burning system. That will help you lose weight.”

But the mini meals gave me heartburn and indigestion. And I kept gaining weight. I purchased a notebook to keep an accurate record of my blood sugar and weight. I learned how to prick my finger and use the blood sugar monitor. And, of course, I prayed a lot. Through my prayers and study, the Spirit of Prophecy statements about two meals a day caught my attention.

I have been a vegetarian since 1983, but I’ve always had a sweet tooth. But now that I was following Ellen White’s health counsel, I decided to go all the way: I eliminated table sugar from my diet.5 The sugar challenge was harder for me than adopting the two meals. Over time I’ve learned to love blueberries, dates, grapes, and other fruits that satisfy my sweet tooth. Now it’s an occasional slice of fruit pie instead of sweets (especially chocolate) after every meal.

At my last doctor’s visit my hemoglobin A1C was 5.4. Those who understand these numbers will recognize that I no longer have diabetes. My bloodwork in all areas is normal. A daily 10,000-step routine outdoors in the fresh air, weightlifting about three times a week, and copious use of water—my only drink now—are the most conspicuous elements of my new lifestyle. My experience leads me to opine that much diabetes treatment addresses symptoms, blood sugar, rather than cause, an overworked, unrested stomach and digestive system. When these organs get the rest they need the body is in much better condition to heal itself by the laws God built into it.

After more than 30 years of taking cholesterol medicine, and about 15 years on high blood pressure medicine, I no longer take these prescription medications. According to my doctor I will always have diabetes, but it is in remission. Now he pummels me with questions about health in Ellen White’s writings and the Bible. He tells me, “I can’t believe that something as simple as two meals a day and cutting out sugar can produce such good results; it’s counterintuitive. But keep doing whatever you’re doing. It’s working for you.”

What has worked for me works, has worked, and will work for others too. Some aspire by strength of personal will. Some, with me, give thanks to God for His grace and enabling strength to choose something better, something facilitating what He wishes for all: “Above all things . . . prosper and be in health” (1 John 3:2, KJV).

The good news for me is that His grace is totally available to help me enjoy this new quality of life as I approach my eightieth birthday. I intend to keep calling on Him to facilitate my healthier, freer, easy-to-maintain, practically superior lifestyle: less kitchen time and effort; lower cost; no diabetes prescriptions.

So what do you think? Is two better than three? It is for me. And besides any personal testimony, research reports that validate the full health reform Adventist lifestyle keep coming out. It’s not just something for three or two people. Ellen White wrote: “If Seventh-day Adventists practiced what they profess to believe, if they were sincere health reformers, they would indeed be a spectacle to the world, to angels, and to [men and women].”6 She also wrote: “Always bear in mind that if you would give it a trial, you would find that two meals are better than three.”7

DeWitt S. Williams, retired and healthy, was formerly director of Health Ministries for the North American Division of Seventh-day Adventists.

Letters
Inbox
A Path to Trusting God | The Junk Collector | Turning the World Right Side Up | From a Longtime Reader | Wrestling With Prayer
Editorial
Crystallizing Angels
It’s a global confrontation between frogs and angels, ribbits and trumpets, and warts and wings.
Release
University Students Explore Careers in Health-care Administration
Adventist Health is preparing a generation to make sound mission-driven decisions.