The year 1969 saw some epic changes in United States society. 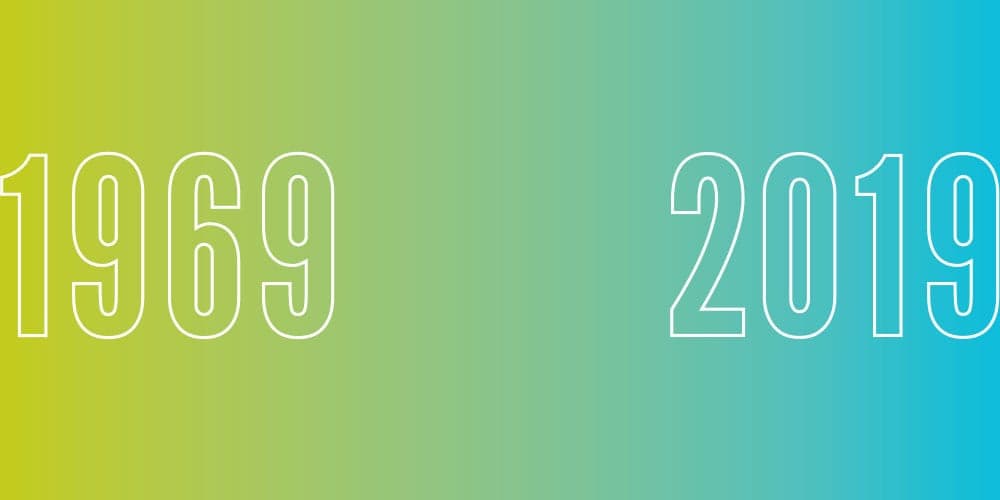 The world was both different and similar 50 years ago. So was the Adventist Church. How so? In this issue two Adventist Review editors recall living in 1969; after which we reflect on difference and similarity in war, music, media, and worship. You can surf your memories too—if you’re one of the more than 90% of today’s population who were alive in 1969.

Memories of how the Spirit moved

When I left home for Caribbean Union College (CUC), I knew where I was going. CUC was my parents’ alma mater; my older sister was an alumna; lots of colporteurs from there had told me about the place.

When I arrived on campus along with the younger brother many thought was my twin, we knew we had come for much more than just becoming employable. We had come to a place of God, a school of the prophets, a nursery of character completion that aimed at heaven. More than anything else, we knew we would be part of a prayer band: participating in a prayer band was a nonnegotiable element of CUC attendance. We learned this from the colporteurs—men who traveled to far countries like ours where good people like my parents gave them lodging, where they spent their days knocking on doors and offering people wonderful medical encyclopedias and religious books, if someone opened the door when they knocked.

Soon enough my brother and I were part of a little group that met every evening after dorm worship for prayer that ministered to inner spiritual needs before we committed the rest of the evening to study, idleness, or both.

In time I modified my definition of colporteurs: they didn’t have to come from overseas, be male, or even be students. I also discovered the significance of nightly prayer band: it was explosive. With no thorough grasp of what was happening inside us and all around, we found ourselves swept up into a spiritual passion beyond our capacity to either fathom or control: the dark little corner under the college printshop could no longer accommodate the prayer group; nor could the brief quarter hour or so between dorm worship and study periods. Sometime in 1969, with quiet suddenness but without any zapped lightning or rolling thunder, the prayer band became uncontrollable: we had to continue after study periods; we had to find a larger room; night after night dozens of young men flowed quietly toward the music room when the official thing to do was resort to bed or study hall as dorm lights were switched off at 10:00 p.m. The music room prayer sessions stretched to interminability. The revival, as we came to recognize it, reached Linda Austin Hall at the other end of campus, because now young men and their girlfriends were talking about prayer. Soon enough, a tide of prayer was sweeping through Linda Austin Hall as well.

Then the prayer group’s leaders requested audience with college administration. Audience granted we came before them to explain that from now on we would be one with them in work and service. We apologized for earlier contempt of their attempts to make us better and cynicism about their rules for orderly campus life. We had been converted, though none of us has ever since been able to explain how it happened—except for the prayer band. One non-Adventist prayer band member decided for baptism. Friends on the fringes of church life became mainstream witnesses for the gospel. Some casual ministerial students decided that gospel ministry was serious business. For Lael-Jonah, the resistance of years to God’s call to pastoral ministry dissolved into “Here am I, Lord: send me.”

Lael Caesar, an Adventist Review associate editor, is still committed to that surrender, “Here am I, Lord: send me.”

During the past few weeks I’ve spent time in airports in some of the largest cities in the United States. I’m a people-watcher, and I like to create imaginary scenarios about the people I see based on what they’re wearing.

For example, a man wearing a hat with the words “Vietnam Veteran” is likely my age. He is balding and bearded with a belly that is far removed from the chiseled physique he sported when he shipped off to fight an unpopular war in a faraway country.

The woman who accompanies the aforementioned veteran looks more like a grandma than a young woman who once had long, soft, shiny hair and wore a tie-dyed skirt and sandals instead of her polyester blouse, pants, and orthopedic “grandma shoes.”

In 1969 I was starting my senior year in high school. Although I had grown up in an Adventist home, the lure of popular culture began to have its effect.

I traded in my black, horn-rimmed glasses (think Clark Kent) for some wire-frame glasses I had picked up in an antique store (think John Lennon). I tried to grow my hair longer, like many of my friends. But often when I returned from the barbershop, my dad would send me back with the order “Have the barber do it right.”

An assignment in senior Bible class required research on a career we might consider as adults. Since my dad was an X-ray technician, that seemed an easy way to make a comfortable living. But one afternoon in my bedroom during my senior year I felt the distinct impression (not a voice, just an impression) You should study for the ministry; the idea being that I should plan to do something of eternal significance.

Now 50 years later I’m sitting in airports watching people, trying to imagine the lives they’ve lived and why they look so old, while I look so . . . well, never mind.

Here’s the thing: 50 years ago marriage was the furthest thing from my mind. I couldn’t have imagined outliving several of my friends. The idea of being a grandparent would never have occurred to me.

And those people who wore bell-bottom pants, smoked dope, and protested the war in Vietnam? They now wear Dockers, live in retirement communities, monitor their retirement portfolios, and take cruises.

Here’s the question: Did we leave our ideals behind when we started collecting academic degrees, children, real estate, and retirement funds? Or are we still passionate about the causes that animated us back in the 1970s, 1980s, and 1990s?

The problems we face now are every bit as intractable as the problems faced as a society back then, except that now the stakes are even higher. Violence in our communities is at epidemic levels. The income gap between those who are very rich and those who are poor is obscene. Racism and bigotry that were latent a few years ago are now overt and unapologetic.

There was a time we thought we could change the world. Do we still think so? Or are we too old?

Stephen Chavez’ start at Adventist Review is closer to 1969 than any other currently serving editor.