Time Line of the Protestant Reformation

Even with its detours and delays, the gospel is still all about Jesus. 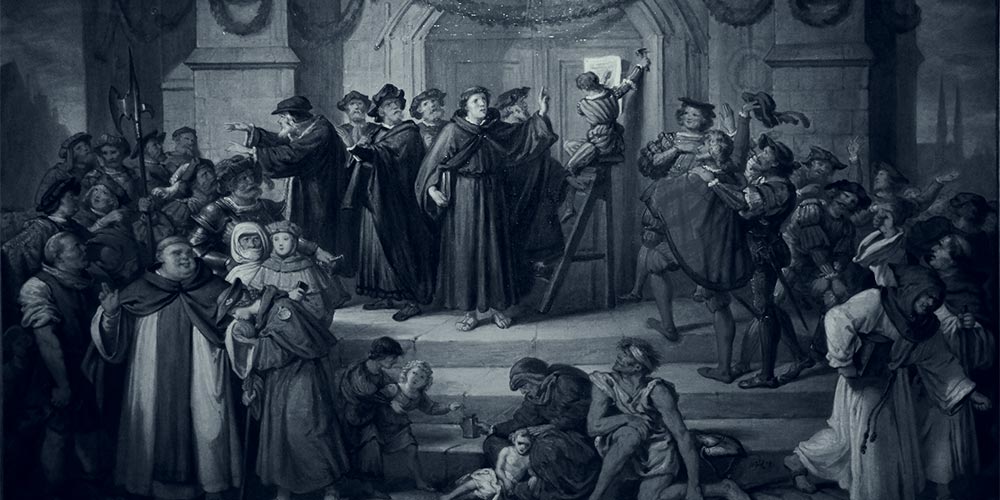 1382John Wycliffe, known as the “Morning Star” of the English Reformation, oversees the translation of the Bible into the language of the people. A group of Bibles, known as “Wycliffe’s Bible,” are translated into Middle English, setting the stage for the Protestant Reformation.

1415Priest and philosopher Jan Hus, heavily influenced by John Wycliffe, is burned at the stake in modern-day Czech Republic for attacking the teachings and practices of the Roman Catholic Church.

1517German theologian and priest Martin Luther posts a list of disputations, now known as the 95 theses, on the door of All Saints’ Church in Wittenberg, Germany, criticizing the practice of indulgences in the Roman Catholic Church. It effectively starts the Protestant Reformation throughout Europe, emphasizing salvation by grace alone and a return to the Bible as the sole source of authority.

1521Luther is called before the Diet of Worms to recant his views about salvation by grace alone. He refuses to move from his positions, declaring, “Unless I am convinced by the testimony of the Scriptures or by clear reason, I am bound by the scriptures I have quoted. . . . I cannot and will not recant anything, since it is neither safe nor right to go against conscience.” As a result, he is declared a heretic.

1526English scholar William Tyndale produces the first English New Testament taken from the Greek language. A decade later he is condemned as a heretic and burned at the stake.

1553Over the span of five years, beginning in 1553, Queen Mary I of England, known as “Bloody Mary,” goes on a campaign to rid England of Protestants, executing nearly 250 heretics, including Nicholas Ridley and Hugh Latimer together. Latimer famously says at their execution, “Play the man, Master Ridley; we shall this day light such a candle, by God’s grace, in England, as I trust shall never be put out.”

1620Fleeing persecution in Europe, the Pilgrims emigrate to the New World, setting up a colony in present-day Massachusetts.

1635Roger Williams is banished from Massachusetts for promoting full religious liberty. He flees to present-day Providence and founds Rhode Island, becoming the first territory to guarantee complete separation of church and state.

1738Englishman John Wesley, while attending a meeting in Aldersgate, hears Martin Luther’s Preface to the Epistle to Romans read and converts to Christ, feeling his heart “strangely warmed.” With his brother and hymn writer, Charles, he launches the Methodist movement, leading to great revival across England and America.

1816New York farmer William Miller converts from deism to Christ, entering upon a deep personal study of the Bible, anchored in the Reformation principles of the primacy of the Bible, and that the Bible explains itself. He eventually concludes that Christ’s second coming is imminent and proclaims the message in the northeastern United States.

1844The “Millerites” experience great disappointment when Christ doesn't return on October 22, after concluding He would do so based on a reading of Daniel 8:14. A few despondent believers come to realize that Christ started His work of the investigative judgment on the date instead.

1845Beginning in 1845, a group of “Adventists” that formed out of the Millerite movement, in continued commitment to faith in the Bible’s unparalleled authority, begin studying the question of the seventh-day Sabbath, ultimately concluding that it is still an institution for Christians to keep and enjoy.

1863The Seventh-day Adventist Church is officially organized in Michigan as a means of spreading “present truth” to “every nation, tribe, tongue, and people” (Rev. 14:6, NKJV)* around the world.

1888Adventist prophet Ellen White declares that the “loud cry” of Revelation 18:1-4, which, as the ultimate continuation of the Protestant Reformation, would spread the message of God’s love to the entire world, had begun in the message of justification by faith being proclaimed by two young preachers, Ellet J. Waggoner and Alonzo T. Jones.

SOONThe Reformation reaches climactic fulfillment when, consistent with His word in the Bible, Jesus comes to earth in splendor, and brings His people to His home of glory, along with the absolute end of evil, of sin and sorrow, death and pain.

* Bible texts credited to NKJV are from the New King James Version. Copyright © 1979, 1980, 1982 by Thomas Nelson, Inc. Used by permission. all rights reserved.

Shawn Brace is a pastor in the Northern New England Conference of Seventh-day Adventists, headquartered in the state of Maine.