​The Vision That Could Not Be Told

Ellen White had a vision, but she couldn’t describe it until the time was right. 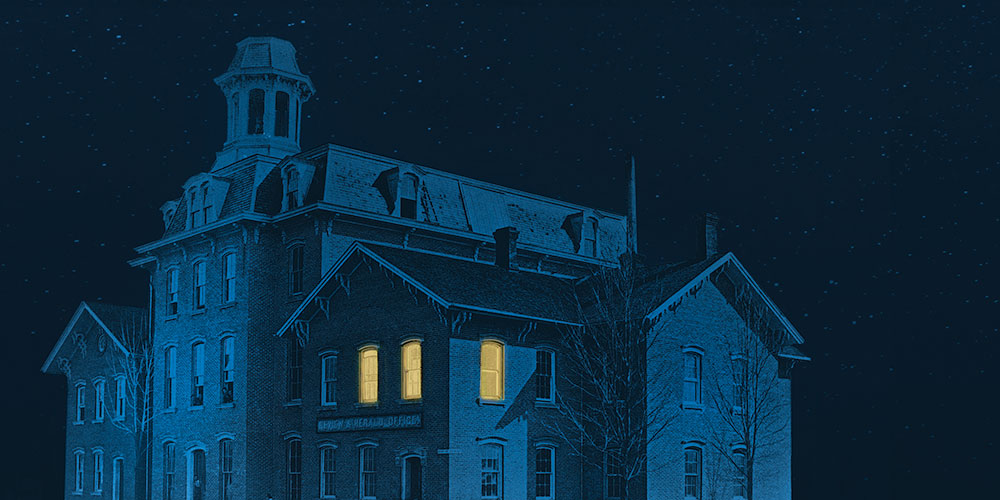 During a series of meetings in Salamanca, New York, in November 1890, Ellen White was addressing large groups. But she became weak, having caught a severe cold on the trip to the city.

After one of the meetings she left for her room discouraged and sick. She intended to pour out her soul before God and plead for His mercy, and for health and strength. She knelt by her chair and, in her own words:

“I had not uttered a word when the whole room seemed filled with a soft, silvery light, and my pain of disappointment and discouragement was removed. I was filled with comfort and hope—the peace of Christ.”

Then she was given a vision. Afterward she didn’t feel like sleeping. She was healed, rested.

In the morning she had to decide: should she go on to where the next meetings were to be held, or should she go back to her home in Battle Creek?

A. T. Robinson, who had charge of the work, and William White, Ellen White’s son, called on her in her room to get her answer. They found her dressed and well. She was ready to go. She told of the healing. She told of receiving a vision. She said, “There are some things presented to me last night concerning the work in Battle Creek.” Then she began to talk about other matters and she did not relate the vision.

Ellen White continued on her journey in the eastern states, but would later describe what had been shown her that evening about plans being made for the church’s religious liberty journal, then called The American Sentinel.

A Preview of the Future

“In the night season I was present in several councils, and there I heard words repeated by influential men to the effect that if The American Sentinel would drop the words ‘Seventh-day Adventist’ from its column, and would say nothing about the sabbath, the great men of the world would patronize it; it would become popular, and do a larger work. This looked very pleasing.

“I saw their countenances brighten, and they began to work on a policy to make the Sentinel a popular success. The whole matter was introduced by men who needed the truth in the chambers of the mind and soul.”

When the General Conference session opened the following year, March 1891, Ellen White was asked to speak to the workers at 5:30 each morning and address the whole conference of 4,000 attendees on Sabbath afternoon.

Her text on Sabbath afternoon was “Let your light so shine before men, that they may see your good works, and glorify your Father which is in heaven” (Matt. 5:16, KJV). The entire discourse was an appeal to Seventh-day Adventists to hold forth the distinctive features of their faith.

Two or three times during the meeting she started to tell of the Salamanca vision, but each time she held back. The events of the vision would simply leave her mind, so she said, “Of this, I shall have more to say later.” All those assembled had noticed that she was unable to call the vision to mind. The president of the General Conference came and asked if she would take the morning meeting.

“No,” she replied, “I’m weary; I’ve borne my testimony. You must make other plans for the morning meeting.”

As Ellen White returned to her home, she told members of her family that she would not be attending the morning meeting. She was tired; she was going to have a good rest. She planned to sleep in on Sunday morning.

That night, after the close of the General Conference session, a small group of men met in one of the offices in the Review and Herald building. At the meeting were representatives of the publishing house that issued The American Sentinel. Also present were representatives of the Religious Liberty Association. They met to discuss and settle a vexing question: the editorial policy of The American Sentinel. The door was locked, and all agreed that the door would stay locked until the question was settled.

A little before 3:00 on Sunday morning the meeting ended in a deadlock, with those representing religious liberty insisting that unless Pacific Press agrees to their demands and drops the terms “Seventh-day Adventist” and “the Sabbath” from the columns of that paper, they would no longer use it as the mouthpiece of the Religious Liberty Association. That meant the paper would cease to exist. Their meeting at a stalemate, they unlocked the door, and the men went to their rooms.

Ellen White wrote that God “has often permitted matters to come to a crisis, that His interference might become marked.”

God sent His angel messenger to Ellen White’s room at 3:00 a.m. She was aroused from sleep and instructed that she must go to the workers’ meeting at 5:30 and present what was shown to her at Salamanca.

She arose quickly and wrote for about two hours what had been shown to her at Salamanca. The ministers were just getting up from prayer in the tabernacle as Ellen White came in the door with a bundle of manuscripts under her arm. The General Conference president was the speaker, and he addressed her:

“Sister White,” he said, “we are happy to see you. Do you have a message for us?”

“Indeed I do,” she said, and stepped to the front. Then she began right where she had left off the day before. She told them that at 3:00 that morning she had been aroused from her sleep and instructed to go to the workers’ meeting and present what had been shown to her at Salamanca.

“In the vision,” she said, “I seemed to be in Battle Creek. I was taken to the Review and Herald office, and the angel messenger bade me, ‘Follow me.’ I was taken to a room where a group of men were earnestly discussing a matter. There was a zeal manifest, but not according to knowledge.”

She told how they were discussing the editorial policy of The American Sentinel. She said, “I saw one of the men take a copy of the Sentinel, hold it high over his head, and say, ‘Unless these articles on the Sabbath and the Second Advent come out of this paper, we can no longer use it as the organ of the Religious Liberty Association.’”

Ellen White spoke for an hour, describing the meeting that had been shown to her in vision months before, and giving counsel based on that revelation. Then she sat down.

The General Conference president didn’t know what to think of her comments. He had never heard of any such meeting. But they didn’t have to wait long for an explanation. A man stood in the back of the room and began to speak:

“I was in that meeting last night.”

“Last night!” Ellen White exclaimed, “Last night? I thought that meeting took place months ago, when it was shown to me in vision.”

“I was in that meeting last night,” he said, “and I am the man who made the remarks about the articles in the paper, while holding it over my head. I’m sorry to say that I was on the wrong side, but I take this opportunity to place myself on the right side.” Then he sat down.

Another man stood to speak, the president of the Religious Liberty Association. Note his words: “I was in that meeting. Last night after the close of the conference some of us met in my office, where we locked ourselves in and there discussed the questions and the matter presented to us this morning. We remained in that room until 3:00 this morning. If I should begin to give a description of what took place and the personal attitude of those in the room, I could not give it as exactly and as correctly as it has been given by Sister White. I now see that I was in error and that the position that I took was not correct. From the light given this morning, I acknowledge that I was wrong.”

Others spoke that day. Everyone in the meeting the night before stood and bore his testimony, saying that Ellen White had accurately described the meeting and the attitude of those in the room.

Before that meeting closed that Sunday morning, the Religious Liberty group gathered together and rescinded the action they had taken only a few hours before.

Had Ellen White not been restrained, and had she related the vision on Sabbath afternoon, her message would not have served the purpose that God had intended, for the meeting had not yet taken place.

Somehow the men did not apply the general counsel given Sabbath afternoon. They thought they knew better. Maybe they reasoned, as some do today, “Perhaps Ellen White did not understand,” or “We live in a different day now.”

The thoughts that Satan whispers to us in these days are the same with which he tempted our ministers in 1891. God, in His own time and in His own way, made it clear that it was His work; He was guiding; He was guarding; He had His hand upon the wheel.

Ellen White wrote that God “has often permitted matters to come to a crisis, that His interference might become marked. Then He has made it manifest that there is a God in Israel.”

This story is adapted from an account written by trustees of the Ellen G. White Estate. It is found in the book Counsels for the Church (Mountain View, Calif.: Pacific Press Pub. Assn., 1991), pp. 25-29.