The Shifting Tide of Fatherhood

When it comes to being a good father, there are no shortcuts. 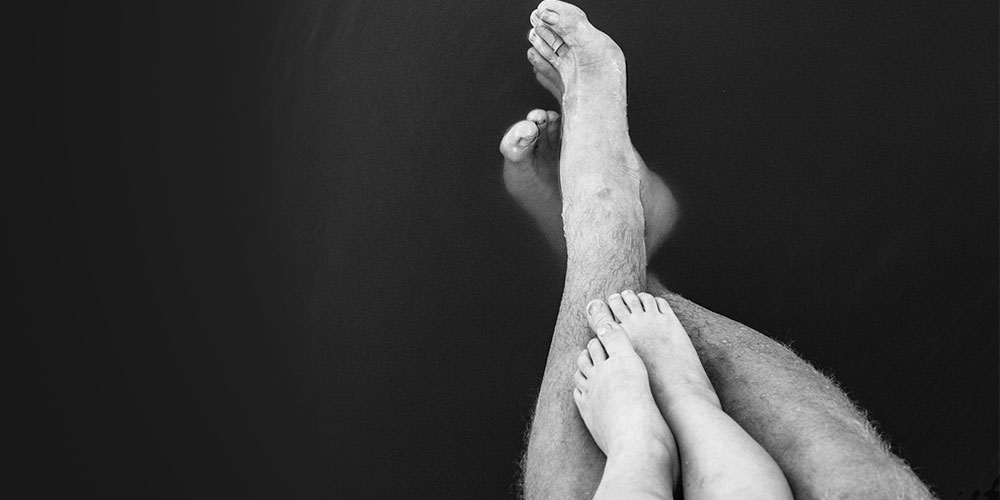 “Fix these words of mine in your hearts and minds. . . . Teach them to your children, talking about them when you sit at home and when you walk along the road, when you lie down and when you get up. Write them on the doorframes of your houses and on your gates, so that your days and the days of your children may be many in the land that the Lord swore to give your forefathers” (Deut. 11:18-21).

One of the greatest joys a man can have is to hold his newborn child in his hands for the first time. Gazing into his baby’s precious eyes, holding its little wrinkled hands with a finger, or listening to the sweet sound of its whimpering cries. It’s one of the most rewarding—and scary—experiences one can have.

With the euphoria of the moment comes an automatic weight on the shoulder of many fathers. Almost instantaneously comes a sense of overwhelming responsibility. We realize in that miracle moment that we are now responsible for a life that at that moment can do nothing to protect itself, express its feelings, or care for its basic needs. In an instant parents become protectors, advocates, and providers for their children.

The joy and responsibility of fatherhood cannot be overstated; neither can the impact of an engaged father in his children’s lives be discounted. No matter the role or place a father occupies in the family, whether a single-father, stay-at-home father, bread-winning father, resident or nonresident father, stepfather, teen father, shared or primary caregiving father, he has an important role to play in the psychological, spiritual, emotional, and physical development of his child.

Not Your Father’s Father

Fatherhood over the past four decades has changed significantly. The role played by fathers in family life has undergone seismic shifts that can be tied to a variety of influences. Some of the changes are because of cultural trends, economic factors, historical events, and gender-equality movements. Cultural shifts have moved the role of fathers in the family from an authority figure concerned about breadwinning, control, discipline, power, and value creation, to a more supportive, emotionally engaged posture. The feminist movement of the 1970s and 1980s, which pushed for more gender equality, introduced into the equation relational consequences for fathers who would not engage in child-rearing activities.

Our job is to instill courage to face a world that is often unimpressed with our children’s best efforts.

Economic factors have played a key role in the shifting of fatherhood, as more women since the 1960s have entered the workforce. According to the United States Census Bureau (2011), 70 percent of children younger than age 18, and 64 percent of children younger than age 6, have a mother who works outside the home. This has impacted fathers and their previously held gender-specific responsibilities by creating dual-income, coparenting homes in which men have become increasingly relied upon to provide domestic support through participating in the child-rearing process.

The shift has moved fathers from their primary role as breadwinners to active participants in basic child-rearing activities. So much so that it is not uncommon to see men in Parent-Teacher Association meetings, or home with children during the day, or performing tasks that were historically performed by mothers.

Researchers have for years attempted to study the links between gender-based parental differences and John Bowlby’s attachment theory, which suggests that infants and young children are conditioned to seek closeness with the parent that most satisfies their need for survival and security. Historically, babies formed a closer emotional attachment to their mothers because so often they were the ones who fed, changed, and soothed their children. But as fathers have become more engaged in the child-rearing process, beyond providing financial support, a deeper emotional, physical, trustworthy connection has been made.

Increasingly men are looking for ways to be better fathers, and to equip themselves to guide their children through a changing culture effectively. More books are being written for new fathers than ever before; and men are buying them, because now, more than ever, raising children has become a joint effort.

So how can a father be a better dad in this shifting culture?

Single-parent homes represent a growing epidemic in North America and around the world. Children whose fathers are around, living at home, have been shown to have less behavioral and substance abuse problems, and greater levels of autonomy and confidence.

However, some alarming negative effects are apparent in fathers who are missing in the lives of their children. According to the National Center for Fathering, 20 million children in the United States currently live in fatherless homes. Additionally, research has shown correlations between negative behavior and psychosocial outcomes among those children. The impact of missing fathers has ramifications for economic stability, school achievement, substance abuse, physical and emotional health, crime, and sexual activity.

Our children need us: they need us to be present, to be engaged emotionally, spiritually, and physically.

While it would be negligent to ascribe those statistics to only one factor, one would be hard-pressed to deny the critical importance of a father’s presence in the lives of children.

There’s a big difference between being there and being “with” your children. This probably goes back to the quantity-versus-quality debate. Which is most important: the amount of time spent with children, or the quality of that time? The answer: both.

Active involvement can be defined in terms of engagement. We have to interact directly with our children; we cannot be so passive that opportunities to play, learn from them, and emotionally connect with them pass by.

Accessibility. Make sure your children can express issues that are important to them, that you are open to meaningful conversations about their day, their friends, their challenges, and their relationships.

If parents do not make themselves accessible to their children, not just with time but with nonjudgmental listening, our children will find someone else to talk to. Ellen White counseled: “Fathers should . . . mingle with the children, sympathizing with them in their little troubles, binding them to their hearts by the strong bonds of love, and establishing such an influence over their expanding minds that their counsel will be regarded as sacred."1

Responsibility. Provide children with the resources they need to be successful. Ellen White also wrote: “The father’s duty to his children should be one of his first interests. It should not be set aside for the sake of acquiring a fortune, or of gaining a high position in the world. In fact, those very conditions of affluence and honor frequently separate a man from his family, and cut off his influence from them more than anything else. If the father would have his children develop harmonious characters, and be an honor to him and a blessing to the world, he has a special work to do.”2

One of my clinical specialties is grief counseling. I often have my clients create a loss history graph. You would be surprised by how many people list as their first loss a loss of trust.

Perhaps a dog died, and a child’s parents buy another dog that looked like the dead dog, thinking their child would not know. Or perhaps a mother and father got divorced, and Mom tells the children their father went on vacation, and the vacation never ended.

Our job as parents—especially as fathers—is to meet our children’s basic needs. We are great at providing physical needs, recreational needs, and spiritual needs, but our children have emotional needs as well.

Love Through the Ages

Our job is to help build confidence, to instill a sense of esteem, resilience, and courage to face a world that is often unimpressed with our children’s best efforts. That can be done only with encouragement, unconditional love, and support. Children have to learn that they are accepted no matter what they do; that they are celebrated even when they fail, because they dared to try. They are loved, not because of who they are, but because of whose they are. After all, the apostle Paul wrote: “Fathers, do not exasperate your children; instead, bring them up in the training and instruction of the Lord” (Eph. 6:4).

In his book The Seven Habits of Highly Effective People Stephen Covey’s second principle is: “Begin with the end in mind.” As parents, our eternal end goal is to see our children saved. Our short-term goal is to see them develop independence, an ability to stand on their own two feet. As we launch them every step of the way through their stages of development, we have to maintain our focus about what they need most. Our jobs are not to make decisions for them, but to influence their decisions.

We build trust by meeting the needs of our children throughout their developmental stages. As they get older, their unique needs change, and our role as parents changes. A summary of the various needs of children during each phase of their lives includes the following:

Ages 0-2: We have to be in tune with their physical needs. Our job is to protect them as they navigate a world they can connect to only in shapes and colors they cannot yet define or appreciate.

Ages 3-6: During this stage of development children are interested in the way things work. During the early parts of this stage parents are constantly bombarded with the question “But why?” It’s because children are trying to make sense of the world around them. Our job during this stage is to embrace their spirit of discovery and encourage them to explore the world beyond themselves.

Ages 7-12: During this stage our children’s bodies are changing. They are going through growth spurts and some puberty. During this stage it is important to develop a habit of open, nonjudgmental communication. As children struggle to find themselves, they will struggle to separate their identities from ours. Affirmation is extremely important as they wrestle with questions about whether they have what it takes to be successful.

Ages 13-18: This is when community becomes important. Teenagers during this stage of development pay less attention to their parents’ impression of their behaviors and more attention to the opinions of their peers and friends. This is also when teenagers begin to clarify their belief system and begin to wrestle with what they will do with their lives. A father’s role during this time is to mobilize them to make their own decisions.

Ages 19-30: This is the launching phase, when it is important to allow young adults to make their own decisions and establish their autonomy. This is when a push for intimacy and connection become their primary focus; not just intimacy in terms of significant romantic relationships, but about how they will intimately engage with the world.

As fathers, we have the important task of being leaders, priests in the home. It is our responsibility do our best and give all we can to help our children succeed in this changing world. Our children need us: they need us to be present, to be engaged emotionally, spiritually, and physically.

As the paradigm of fatherhood continues to shift and fathers’ roles expand, we do well to remember Ellen White’s statement: “The world is not so much in need of great minds as of good men who will be a blessing in their homes.”3

David Defoe is a husband to Denise and proud father of Dayna Imara. A licensed clinical counselor and family life educator, he is lead pastor of the New Life Seventh-day Adventist Church in Gaithersburg, Maryland.