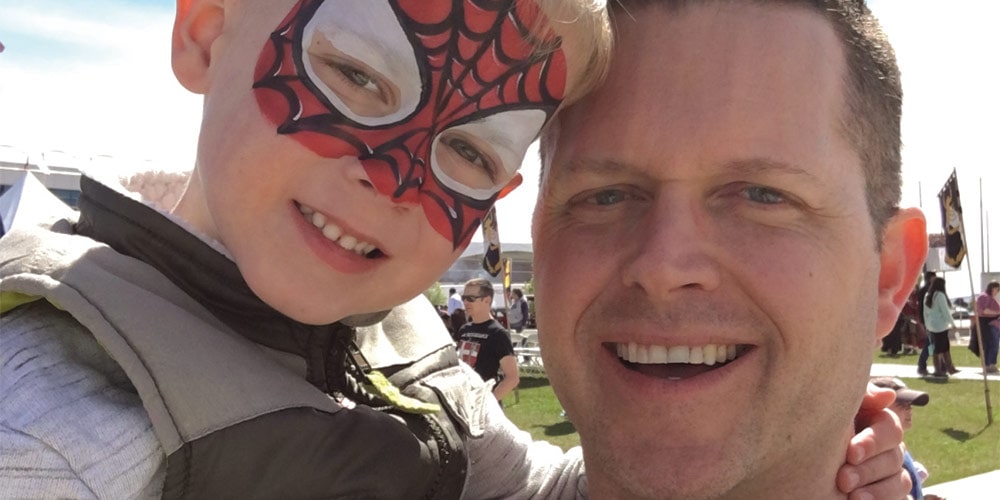 I love this picture of my son and me at a local fair a couple years ago. The face painter turned my son into the amazing Spider-Man. He was on cloud nine.

I’m not a huge movie watcher, but I saw the first Spider-Man movie years ago. If you did too, you may recall the lesson Peter Parker’s (Spider-Man’s) uncle passed on to him:
“With great power comes great responsibility.”

We Seventh-day Adventists actually have more power than we might think. We have an amplified understanding of what is happening in this world, of God’s plans for our lives and for the future of the universe, and a fascinating origin story involving every living being across time. We have the full scoop on the complete picture, and that information is power.

Our prophetic understanding is in 4K ultra resolution, and our hindsight is 20/20. But what about our
“heart sight”?

Given all this information, it is our responsibility not only to share the truth, but to do so in love, so that “speaking the truth in love, we will grow to become in every respect the mature body of him who is the head, that is, Christ” (Eph. 4:15).

As a musician, I’ve worked with many Adventist evangelists over the years, helping with music during their seminars. Many of them approach their role with great responsibility, and they have my respect. But others, I feel, take a less-than-responsible approach to their role. They arrive in a church and proceed to conduct meetings every night, sharing facts and Bible data as through a veritable firehose. After 20 or 30 nights of this, the attendees, dazed and barely comprehending all this new data, are then ushered through a one-on-one “clearing” meeting. The evangelist proceeds to question them with a long checklist of topics:

[Bullet] Do you believe that hell is a state of eternal separation from God and not a place of eternal torment?

[Bullet] Do you agree that the seventh day is the Sabbath, and that believers should neither buy nor sell nor work on that day?

[Bullet] Do you believe in tithing and agree to tithe to the local church on a consistent basis?

Attendees who consent to every question are checked off the list as “cleared for baptism.” Thankfully, not all evangelists use this method. They understand that baptism is not about assenting to mere factual knowledge. But many did and still do.

The recidivism rate for this approach to evangelism is very high, particularly when no relational aspect is built in to this method to ensure that seminar attendees meet and form relationships with existing church members. Evangelism is vital to the gospel. But this mode? It is lifeless and legalistic. I’m not against the seminar evangelistic approach to sharing the gospel. When done effectively, it works for some people very well, for the meetings share vital information from Scripture. But when the seminars become too heavily steeped in facts, and baptism finds anchor in intellectual correctness, something irresponsible has occurred. Spiritual stillborns are made, and legalism is the result.

At the other end of the spectrum I had another experience with a different kind of legalism, albeit one that managed to turn my stomach in the same way.

The
Oxford English Dictionary defines legalism as “excessive adherence to law or formula.” And while the legalists in this other group did not make it their mission to force other people’s behavior along rigid adherence to rules, they did manage to excuse their own behavior on the basis of works, though very subtly.

They are still around today, and their code of conduct resembles something like this:

“Look: it was all done at the cross! Jesus and His grace cover me and there’s nothing left to do. Don’t push repentance and the law in my face. Don’t shove doctrine down my throat. The only thing that matters is having a relationship with Jesus.”

Some people call this liberalism, also known as antinomianism. But it is really the same old legalism in a new suit. Instead of trusting in a lot of head knowledge, or pushing doctrine
onto other people, this brand of legalism goes to the extreme opposite: pushing all doctrine down and away to an excessive degree.

In fact, while their preeminent assertion was always “Jesus,” further discussion with anyone in this group made it apparent that this Jesus was little more than a cardboard cutout, a buzzword for the notion of “nothing required but to dress well and be civil.” I sometimes wonder whether this group is less of its own unique entity and more of a reaction movement to the first group of legalists that I mentioned.

While the messages of the two groups are different, their actions can at times be equated. Take materialism, for example, where the first group pours money into expensive cathedral-style church decor and ornate traditional sanctuaries, while the second group pours money into hot beverage bars in their lobbies, and lights and smoke machines for their stages. The first group prizes pricey suits and ties; the second group values the latest skinny jeans and trendy fashions. Perhaps they are no more than two sides of the same coin.

Their messages highlight one of two extremes. Either “You need to do more on your own” or “Lighten up! You need to do very little or nothing.” One mistakenly prides themselves for keeping a list of laws; the other mistakenly prides Christ for doing away with the law so that they don’t need to behave. One group does every kind of work except surrender to Jesus; the other group wants a friendship with Jesus without surrender.

Between the Extremes Comes Great Responsibility

I have a testimony to share, but it belongs to another time and another place. However, I will say this: I have at different times in my life also been pulled to these two extremes
. Maybe you have too. But having shared my perspective on these two “extremes” within Adventism, it’s important to add this thought: While we have experienced extremes in this church at times, the extremes do not dominate the identity of this church. Our identity has not changed.

That identity, along with our special role and mission, has not changed since our church’s inception. Nor is there any reason to think it would need to change. Ellen White said many things about Adventism’s identity and role in the last days. Note these two passages from her writings:

“In a special sense Seventh-day Adventists have been set in the world as watchmen and light bearers. To them has been entrusted the last warning for a perishing world. On them is shining wonderful light from the Word of God. They have been given a work of the most solemn import—the proclamation of the first, second, and third angels’ messages. There is no other work of so great importance. They are to allow nothing else to absorb their attention.”1

Again: “The message of Christ’s righteousness is to sound from one end of the earth to the other to prepare the way of the Lord. This is the glory of God, which closes the work of the third angel.”2

Is traditional Adventist identity—the peculiar doctrines, the three angels’ messages, the writings of Ellen White and our early pioneers—so at odds with Christ’s righteousness and the grace He brings that we cannot find a way to reconcile the absolute value of both of these realities to our future identity?

As a lifelong Seventh-day Adventist, I know what it’s like to be inundated with doctrines and beasts in a way that is lifeless and ineffective. I also know what it is like to be told that “nothing is required because grace covers all.” That second idea led me to make horrible decisions that I am still paying for today.

But both extremes can kill us. Somewhere in the middle lie all our peculiar doctrines, bursting at the seams with more love and grace through Christ than we may yet have tapped into.

This powerful combination alone will help us fulfill our unchanging identity as we seek to share the three angels’ messages—to lift up Jesus in all the truth.

After all, what are we here for?

Adam Ferguson is an audiovideo technologist and a music minister in Albuquerque, New Mexico.