Honesty in an age of white lies, colorful lies, and alternate facts. 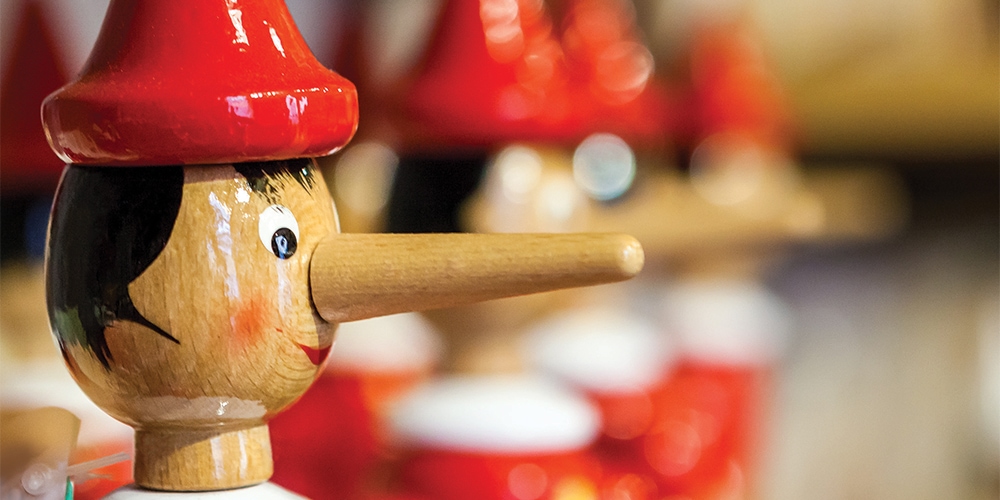 With Twitter and other social media forms now connecting our globe in instantaneous communication, fact-checking or information verification is a much needed and growing industry. Its processes regularly surface in the presence of baseless assertions, filtered opinions, doctored statistics, alternative facts, biased propaganda, “fake news,” and an increasing insensitivity to white lies.

That last category came starkly to the public’s attention with a recent admission by Hope Hicks, then White House communication secretary. In a hearing before the House Intelligence Committee (Feb. 27, 2018), she admitted to telling such lies on behalf of the nation’s president.

That Hicks resigned the very next day generated considerable speculation regarding her “post-admission” relationship with Mr. Trump. While the White House may have regarded her statement as an unforced error, her confession was an accurate, if naive, accounts generally reported about White House operations, and more important, the public’s own penchant for tweaking information to fit desired outcomes.

Hicks’ performance, and the political stir it caused, highlight a number of pertinent considerations with respect to truth-telling. Prominent among these is the question of whether lying in any form is ever justified, even the kindly regarded white lie.

Theologians, philosophers, and social ethicists, those most likely to answer questions such as this, respond differently. Notwithstanding their varied backgrounds and approaches, their answers usually position them in one of two mutually exclusive belief patterns: those who hold that under no circumstance is a lie justified, and those who believe that there are situations in which lying is allowed. Those who believe that lying is never justified, even a “little bit,” are said to embrace “moral absolutism.” Those who hold that lying is justifiable when it is beneficial to desired ends are known to practice moral relativism.

For moral absolutists a lie is any statement or act that differs from literal facts or actual states of being. For them the truth unswervingly conforms to those realities. Moral relativism insists that right actions are properly guided, not by truth derived from absolute authority (as do absolutists), but by circumstances. For its followers, there is no final truth, and that which does exist is justifiably disposable if it is hostile to desired ends. All of which reminds us that the tenants of both absolutism and relativism are skewed by perverse freedoms. Relativism, untethered to absolute authority, possesses unaccountable license to choose in matters of moral dilemma. And absolutism, because of its oft-repeated “God said it, and I believe it, and that settles it for me,” functions as an excuse for avoiding the often-painful process of decision making, absolving one from trying to understand why, when, to whom God spoke, and how those principles involved should be applied in modern settings.

Most Christians fashion their actions by the transcendent laws and principles of divine authority and strive to avoid intentional lying. Nevertheless, even committed believers are sometimes susceptible to bending and breaking the boundaries of truth as seen in their indulging in such common inconsistencies as “Come right in; I’m very happy to see you.” “That was a wonderful meal; I really enjoyed it.” “It’s been years, and you haven’t changed at all.” “I’ll be praying for you.” “I look forward to seeing you soon.” Even “I really enjoyed the sermon!”

The shades of dishonesty conveyed by verbal and nonverbal statements such as these effectively move the needle of concern from the troubled individuals seen on the evening news to our own individual struggles for truthfulness. Most Christians are absolutist in their regard for duty in “truth-telling.” But that is not to say that they are absolutely faithful in doing so.

Then there is the matter of corporate truth telling. Is a congregation telling the truth when it advertises itself as a refuge where the honest in Babylon can escape its sins, but tolerates the very lifestyles its teaching condemns, as a result of its unwillingness to discipline its members? Is it telling the truth when congregations issue membership reports that include names (sometimes hundreds of them) accumulated over years, even decades, of persons who have long since apostatized?

What about reports of a world membership of 20 million without current and rigorous membership audits? Are Adventist preachers being morally absolute in our public evangelism when, attempting to be “wise as serpents and harmless as doves,” they present themselves as “interdenominational” or provide evasive answers in response to honest inquiries?

These and similar considerations are not the only challenges to individual and corporate truth telling in the Christian community. Even more challenging and thought-provoking is telling the truth in the face of loss, including the possible loss of someone’s life, or even one’s own life. The difficulty for absolutists is that conscious lying, even under such dire consequences as these, is never an option.

What then are our options? Surely the God of mercy who devised a way to deliver fallen humanity from the dire consequences of sin is not pleased with ethical codes resulting in moral repugnance. On the other hand, the God of justice, whose restoration effort required the life of His Son, has not left us to obey moral commands grounded in the fickle quirks of circumstance.

The Ethics of Restoration

By what ethic, then, do Christians avoid the unseemly consequences of literalistic compliance to “turn not to the left hand nor to the right,” without drifting into the humanistic ways of unscriptural relativism?

The answer is a third and morally superior category: the ethic of restoration. By restorationism we mean morality fashioned by the seminal purpose that motivated and embodied the earthly ministry of Christ. In the words of Ellen White: “To restore in man the image His Maker, to bring him back to the perfection in which he was created,”
1 was Christ’s mantra and should be for His followers “the great object of life” itself.

Guided by this belief, we see that Christ’s actions, while informed by absolute principles, were never subjected to the tyranny of literalism. His decisions were inspired neither by implacable facts nor shifting circumstances, but rather the unshakable purpose of restoration (rehabilitation) of individual and corporate humanity.

In carrying out His mission, He worked on the Sabbath by healing the sick; He minimized and even withheld sought-after facts, as when He refused to tell His disciples the whole truth about coming events. He repeatedly departed from the absolutist script of the Pharisees in His compassionate ministry of hope and healing. It is especially enlightening to note that while He attributed murder and lust to thought, not simply overt display, He at times approved, as moral, such gaps of formalized propriety as when Mary tenderly washed His feet (Luke 7:36-50). On the other hand, at the peril of His life, He responded to feckless Pilate regarding His identity with full, factual, even self-incriminating disclosure. His actions were always consistent with the individual and corporate good of those whom He had come to save. Circumstances did not give birth to His principles; but they were critical to the manner in which He utilized them.

Most Christians are absolutist in their regard for duty in “truth-telling.” But that is not to say that they are absolutely faithful in doing so.

It is also plausible, I believe, to interpret, as well, various Old Testament incidents—Jochebed hiding Baby Moses and involving her daughter, Miriam, in the deceptive scheme (Ex. 2:1-10); Tamar’s disguising herself in order to obtain justice (Gen. 38:8-30); Jael’s destruction of Sisera (Judges 4:17-24)—as neither absolutist nor relativistic, but rather restorationist.

Restorationism as a moral ethic is superior to both absolutism and relativism in that it is tuned to the Godhead’s purposes in the warfare between good and evil. It anchors in the fact that humanity’s fall from its original status is tied to the first lie, and regards any act that is harmful to God’s purposes as perpetuating deceit, while those that are consistent with those purposes are “telling the truth.” Further, that in acting upon this ethical premise one’s question should be not simply “What did God say?” but “What was, and is, God doing?”

Restoration ethics sees the words “lying lips are an abomination to the Lord” as speaking plainly to God’s repulsion for false, life-depreciating intentions (verbal or nonverbal). It regards the second part of that statement, “but those who deal truthfully are His delight” (Prov. 12:22, NKJV),2 as emphasizing His distinct pleasure in actions calculated to lift humanity toward its original ideal in Eden.

We have to understand that examples of duty by dedicated persons in the Bible are not to be viewed as “codes” referenced and duplicated with frozen exactitude, but rather as examples or “cases” describing principles to be identified and applied in contemporary society. The question is not “What did Jesus and the other stalwarts of Scripture do?” but, given the principles that guided their actions, “What would they do in a given situation today.” Examples include Paul’s advising the return of the runaway slave (Philemon 8-13) and Ellen White’s counsel to disobey the Fugitive Slave Law.

We have to understand that principles, though absolute, frequently clash, often requiring difficult choices. A dinner guest, pressed by the host to try another dish, or more of the same, must choose between principles of temperance and common courtesy. Similarly, individuals who have promised financial aid to a needy family, then discovering that to do so would severely cripple their own family unit, must choose between principles of promise keeping and self-preservation.

We have to understand that motives, not “ends” or “means,” best qualify the morality of our actions: “Every act is judged by the motives that prompt it.”3

We have to understand that proper morality tests its motives by the twin spheres of God’s character: justice and mercy. When certainty seems illusive, “it is better to err on the side of mercy than on the side of severity.”4

We have to understand the significance of all three elements of one’s moral machinery—our “desiring appetites” (see Gal. 5:16, 17), our “deliberating reason” (see Isa. 1:18), and our “deciding will” (see Rom. 7:18, 19). All of these must be consecrated to God. Further, we must understand that while all three are critical to proper morality, the will is decision’s most critical component. In the words of Ellen White: “Everything depends on the right action of the will.”5

So how do we know whether our performance has satisfied this formula? Actually, we do not, at least we don’t always know. We have no physical Urim and Thummim to indicate divine will and regard. Our gracious Lord will soon let us know that we have done our best. Meanwhile, our greatest comfort is derived from the assurance gained by the study of God’s Word. By this means our understandings and perceptions are continuously enhanced and primed to act truthfully in the small, as well as large, decisions of life.

Calvin B. Rock has a degree in ethics and has served the church as a university president and General Conference vice president.