Jesus made history by coming to earth as a baby. But He’s not a baby anymore. 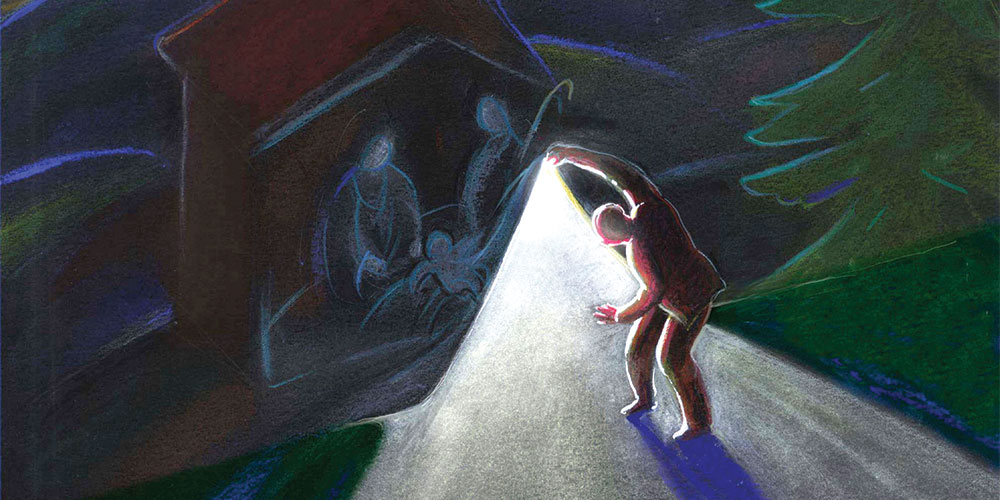 Feeling stuck is not a good sensation.

Leo Wan just wanted to see the sunrise after a long night celebrating a birthday with his friends. So he chose to get the best seat: right on top of the chimney, with his legs dangling inside.

In hindsight, that was his first mistake. As he tried to climb out of the chimney he slipped and finally stopped seven feet down at the bottom of the flue. No amount of shouting and yelling was able to catch the attention of his friends, who, soon after, left to saunter home.

Leo was left in the tight space of a sooty chimney, unable to move up or down. Fortunately, his cell phone still showed coverage, and he was able to call for help. The fire brigade arrived 45 minutes later, and, with the help of a rope, Leo was finally able to squeeze his way back up. After more than seven hours stuck in space he once again enjoyed the sunlight of an English late-autumn day.1

Feeling “stuck” is an awful sensation. Whether it’s a self-destructive habit, a disastrous relationship, or an unsatisfying job—we don’t like feeling “stuck.” In fact, judging from the comments of members of the recent graduating class of my oldest daughter, “being stuck” (in an office, a job, a relationship or something they just don’t like) rates high on the list of things high school graduates want to avoid. People all around us send clear (and sometimes less clear) SOS signals as they tell us, “I feel stuck; I don’t know how to get out of this.”

Stuck in a Manger

Nativity scenes attract many spectators during the festive season. That’s why churches put them outside the main door, or in a prominent place in the entrance or in the main sanctuary. We feel something special when we look at the tranquil scene of Mary, often sitting next to a trough, with Baby Jesus lying on hay. Joseph usually stands close by, hovering protectively over Mary and Jesus. If animals could smile, all the animals surrounding that special couple would be smiling benevolently. There may even be some shepherds or Wise Men kneeling and beaming at the Baby.

We recognize, of course, that in reality the story of the birth of Jesus lacked serendipity, tranquillity, and harmony.2 The biblical text describing the birth of Jesus seems to ooze uncertainty, fear, selfishness, and, ultimately, death. Yet we can also see hope, catch a tiny glimpse of heaven, and appreciate the beginning of something new in a story that has been told millions of times. Baby Jesus, lying in the manger, has become an icon of good news shared on dark nights and is often equivalent to Christianity per se. When we see the Baby, we know all will be well.

The battle for the heart of humanity is hand-to-hand combat, not remotely controlled drone warfare.

Bethlehem’s manger, however, was not the first act of God’s grand scheme we call the “plan of salvation.” Sin did not surprise the Godhead, nor did it confound the Maker of the universe. Its entrance had shaken heaven to its foundation—so much so that one third of heaven’s inhabitants decided to change allegiance (Rev. 12:3, 4, 7-9). Yet God was not caught unprepared, like a deer being caught in the headlights of a car, unable to move or act. Ephesians 3:11 talks about God’s mystery, His plan of salvation in Christ, which was manifested “according to the eternal purpose that he accomplished in Christ Jesus our Lord.” The Greek used here could also be translated as “God did just as He had always planned to” or “what God did was according to the way He had planned it right from the beginning.”3

“The meaning is not so much that God’s purpose runs through the ages,” writes New Testament scholar Andrew Lincoln, “as that it is before all time and eternal.”4 Satan, the cunning serpent turned dragon, was eager to ruin God’s plans and disrupt the divine effort to save humanity. Whether by force or by craftiness, whether through compliments or threats, he was eagerly waiting for an opportunity to destroy the Son of God.

We know very little about Jesus’ childhood and youth. Doctor Luke offers the only scant hints to this formative period. Jesus grew in wisdom and stature, and in favor with God and humanity (Luke 2:40, 52). He returned to the most public stage of the universe only when He turned 30. Yet every day, every moment, every minute He faced the tempter whispering into His ears that He would fail and that the creation would reject the Creator. Ellen White describes this battle for the minds of people in these words: “Satan was exulting that he had succeeded in debasing the image of God in humanity. Then Jesus came to restore in man the image of his Maker. None but Christ can fashion anew the character that has been ruined by sin. He came to expel the demons that had controlled the will. He came to lift us up from the dust, to reshape the marred character after the pattern of His divine character, and to make it beautiful with His own glory.”5

By now we have realized that the manger is empty, that the Baby has become a Man, and that the battle for the heart of humanity is hand-to-hand combat, not remotely controlled drone warfare. Jesus, the God-man, was right in the midst of it: in the carpenter’s shop in Nazareth, in His home with Mary and His family, on the road to Capernaum, in the Temple in Jerusalem. Every day of the three and half years of public ministry was spent in battle. Finally, Satan thought he had the Son of God where he wanted Him: stuck on a cross and suspended between heaven and earth.

Yet not even death could hold the One who had breathed life into humanity. Raised from the dead, triumphantly exalted, He finally ascended to heaven to prepare homes for us so that we too could go home.

And here the circle closes. The Baby stuck in a manger, the Youth stuck in a carpenter’s shop, the Man stuck on the cross, cannot be held in space and time. His kingdom is eternal; His domain is intergalactic; His love is stellar; His grace is all-encompassing. We catch a glimpse of this on resurrection morning; we see a hint of His glory on the Mount of Transfiguration; we experience a foretaste of eternal salvation when His Spirit whispers to our hearts: “Don’t be afraid—just believe.”

That’s when walls bust open, chains come off, and we realize that we aren’t stuck in time and space—we’re free. Free to start running into His outstretched arms.

Gerald A. Klingbeil is an associate editor of the Adventist Review who marvels at the power of the Baby who is not stuck in space.