Some of those who speak for God may not actually know Him. 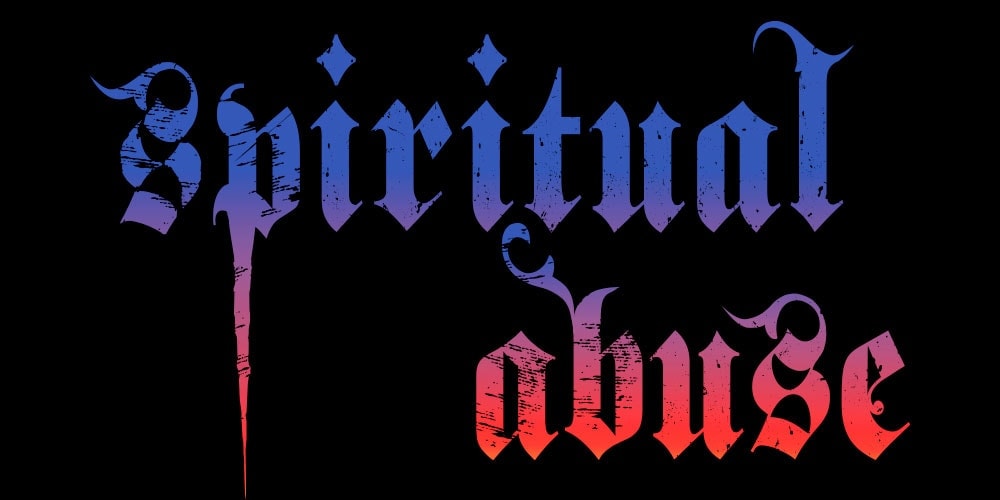 The Word of God is “sharper than any double-edged sword” (Heb. 4:12). Is it designed, then, as an instrument of painful, even violent, aggression? After all, it describes itself as sharper than your own weapons of bloody violence, and powerfully so. Powerful, sharp—very sharp, piercing through to your core, the Spirit’s sword, according to Paul (Eph. 6:17).

Maybe this can help us understand why some think of spiritual abuse as hitting you over the head with the Bible (assault and battery, it sounds like); as a constant readiness to throw scripture texts at a problem rather than listen and talk things over together. Problems remain unresolved because instead of interaction between those on both sides of an issue there is spiritual aggression on the part of one side against the rest.

Good church folk believe mostly that issues are allowed to have just two sides: right or wrong. Spiritually, this means choosing beautiful truth and rejecting ugly error; religiously speaking, it means standing in the right camp, against the wrong. Some scholars say that the expression “spiritual abuse” is new.1 Whether or not, its implications are at least as old as the devil, as old as the choice between heaven and “the hot place,” with many true believers consigning all who disagree with them to the latter, finding support in Jesus’ position that whoever is not with Him is against Him (Matt. 12:30; Luke 11:23). Germs of abuse sometimes lurk unseen in precisely such intolerant spiritual locations.

One particularly personal definition of spiritual abuse sees it as imputing to God the results of my selfishness, blaming Him for ghettos of poverty outside my fence—erected and armed to preserve me from the stain of that poverty.

Escaping calculated spiritual abuse can be as complicated as escaping domestic abuse.

Over against those who blame God for the world’s misery are others who expect God’s representatives to be the ones constantly delivering the world from misery. Their definition of spiritual abuse involves (1) leaders using misconceived spirituality to misdirect their followers; or (2) pastors interpreting otherwise correct doctrine in a way that fits their personal agenda; or (3) pastors and spiritual leaders inflicting emotional pain on their congregation instead of emotional uplift; or (4) leaders—even parents specifically—requiring, in the name of God, behaviors that are not in the best interests of the youth or others who look to them for guidance. In this understanding, humans who should but fail to represent God well are practitioners of spiritual abuse.

These definitions see the problem of spiritual abuse as the problem of abusers who occupy spiritual roles in which their leadership misrepresents the God that their conduct is expected to model. Their victims look to them to learn of God. But their self-serving, even their exploitation and cruelty, directly contradicts expectations.

In the Name of God, Tradition, and Conformity

Abuse inspired by church leaders for the sake of maintaining spiritual standards claims anchorage in the supernatural: their rule(s) may cover any area from style of church garment or music to choice of food or entertainment; from noise level in the sanctuary to posture for, and language of, prayer; from length of worship service to (non)justification of Sabbath funerals in the sanctuary.

Whether recently written into church policy or long assumed, a rule based on God or the antiquity over which He is assumed to reign, is often held to be untouchable; easily seen to be both correct and nonnegotiable. Those upon whom it is foisted may feel conscience-bound to do whatever is thus presented. Either that, or they can tell from the stated rationale that they have no recourse, that any appeal of theirs is already answered with the explanation that only God, the author of the rule, can change it. At this point Scripture may be invoked to establish the futility of such appeal, since God doesn’t change (Mal. 3:6).

This particular and oft-quoted message about God from Malachi (meaning: “the Lord’s messenger”), used in context of compelling conformity, is itself a classic illustration of spiritual abuse: the text being wielded is not about tradition or forced conformity, but about God’s enduring loving-kindness that bears with and forgives the culpable.

This lovingkindness first revealed itself in glory unmeasured eons ago, when a spiritual being sometimes called Lucifer decided that God’s rulership was a function of spiritual abuse. He could see, and tried to show his celestial colleagues, that contrary to standard claim, they were all being victimized, and that love, however loudly and often claimed, was not “the foundation of the government of God.”2

As God “in yearning pity for Lucifer and his followers” worked to restore his joy by correcting his thinking, “Lucifer pointed to the long-suffering of God as an evidence of his own superiority,”3 and continued to press his point: any law being imposed upon the angels was an inappropriate restraint; they “needed no such restraint, for their own wisdom was a sufficient guide.”4 Freedom was what they deserved.5

Lucifer’s rebellious strategy does not appear to wield a sword initially. For spiritual abuse embraces a range of attitudes and behaviors that encompasses ostensible meekness as surely as it includes all-out violence.

Safety from domestic abuse consistently involves protection from physical violence meted out by a parent or intimate partner. Not so with spiritual abuse. For cruelty is not the defining mark of its presence: it is not how tortured a person may be that identifies them as a subject of spiritual abuse. Rather, it is often enough how externally controlled they are mentally, emotionally, spiritually.

Jim Jones was spiritually abusing followers who attended his healing services at the Peoples Temple in California, and when they worked in his gardens in the Guyanese jungle, just as surely as when nearly a thousand of them, including 304 children, died from doses of his cyanide-laced punch on November 18, 1978. Facts and legends about the rants and promiscuity of the 47-year-old Jones do not modify the truth about control: it was his control over them that led them to hand over their possessions and future to him; that brought them from North America to near-uninhabited forests in Guyana; that led them to join him in founding the communal unit that came to bear his name, Jonestown. Whether they were better or worse than anyone else counted for less than whether they believed or were subject to their spiritual master.

While Lucifer won his first followers with the argument for their superiority to law, his commitment to manipulation may go in any direction and come from any angle.

For the Sake of Me

In her control of the birthright ritual (Gen. 27), Isaac’s spouse and Jacob’s mother, Rebekah, offers a classic biblical illustration of spiritual abuse for the sake of “me.” The birthright blessing does involve reasons for acting “in the name of God”; but Rebekah’s uninspired, commonsense attitude conveys the thinking that left to God, she and her pet son, Jacob, would be shut out from their family’s material and spiritual equations within a matter of hours.

The account overflows with markers of her dominance in the story. Even in the report of Isaac’s word to Esau the narrative deliberately turns to her as the crucial eavesdropper.6 And when the story becomes hers, she initiates all the actions Jacob her “little son”7 participates in, including multiple details of deception in which he is only a passive recipient: it is Rebekah who selects the best of Esau’s clothes, dresses Jacob, and puts hairy skin on Jacob’s hands and neck. Isaac’s recruitment of Esau involves four imperatives;8 Rebekah speaks seven, the first of which is “obey.”9

Her focused spiritual manipulation stands out most boldly when she swallows up Jacob’s single comment against the unscrupulous scheme: if caught in the fraud he “would bring down a curse on [him]self rather than a blessing” (Gen. 27:12). To which Rebekah promptly responds, “My son, let the curse fall on me. Just obey me” (verse 13, author’s rendering). Her attitude in the drama appears as matter of fact and exploitative as that of Alaskan Thomas Skeek, who repeatedly abused his wife, Linda, while forbidding her to report his cruelty because “we have these two children, and if I go to jail . . . they’re not going to grow up with a dad.”10

Mention of Rebekah and Skeek in no way validates the pathetic responses of Rebekah’s son or Skeek’s wife. Citing them only helps illustrate the victim’s plight. Escaping calculated spiritual abuse can be as complicated as escaping domestic abuse. Abusing parents, leaders, and others are in as much need of help as are those they manipulate and inappropriately control. Once awakened to their situation and desirous of deliverance, abuser and abused may need to seek help from the same sources as other abused persons: all may benefit from personal, Christian counseling; victims may need relocation (a different church home, perhaps) and even the protection of the law.

United States congressman Leo Ryan’s death in the American-Guyanese disaster of Jonestown shows how far and imperiling the reach of spiritual abuse can be. Rebekah’s single-mindedness highlights how deceived a follower of God may become in their drive to realize God’s will. Her tragedy and Jacob’s may be an object lesson for spiritual leaders and followers so determined to achieve for God that they must supply their own unconverted means—crude or elegant—to accomplish His ends. Church leaders contemplating their next grand project, dreaming of ways to establish Christian order or inspire their congregation’s youth; parents and well-wishers determined to help their children achieve all that God means for them to be, may all pause right now, rethink their next move, and ask the crucial question: Could this be taking God’s name in vain?

Lael Caesar, Adventist Review associate editor, has a seven-word motto for all his life’s projects: “Do all to the glory of God” (1 Cor. 10:31).